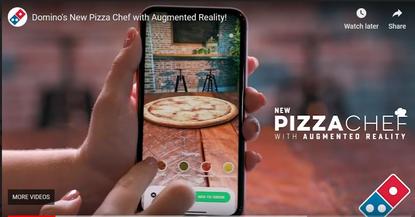 Domino’s has introduced what it claims is the world’s first augmented reality (AR) pizza ordering offering.

The New Pizza Chef is available through the QSR’s mobile app and taps into both Apple’s ARKit and Google’s ARCore AR development frameworks in order to understand the space around a user. Customers can create their own pizza combination using a selection of toppings and bases, bringing the food to life in front of them virtually. There are also several surprise and delight elements included in the AR.

“Innovations such as the new Pizza Chef with augmented reality are important as they help us to continue to drive online sales. And with the up to 2 million items sold online in one week, we know it’s important for us to always be making the online ordering experience more seamless, rewarding and memorable for our customers.”

Domino’s CMO, Allan Collins, said tapping AR was about seeing order placements from the perspective of the customer.

“Users will be able to visually create their favourite pizza by dragging toppings onto a virtual pizza, selecting their preferred crust, sauce, cheese and swirls and see it being created first-hand,” he said. “Making sure each ingredient shown reflects the weight we use in store, means that the pizza a customer receives looks the same as the one they created; and that makes for a more satisfied customer.”

The AR innovation is just one in a swathe of digital technology investments Domino’s has made in its bid to better engage customers. Other capabilities in recent years include Liza Pizza Tracker, OnTime Cooking, its GPS Driver Tracker technology and its artificial intelligence-powered delivery robot, DRU.

“When we decided to create new Pizza Chef with augmented reality, we wanted to create a more enriching experience for our customers,” Domino’s Australia CEO, Nick Knight, commented, adding the latest offering is an example of how the brand is pushing the boundaries on what it can do.

The company also noted demand for AR is rising, and cited the Global Augmented Reality Market Research Report 2018 – 2025, which suggests the technology will grow at about 65 per cent CAGR from now until 20105.

“We never lose sight of the importance of fitting into our customers’ busy lives, but we also want to offer an experience that’s different and unique.”

The news came as Domino’s presented an update on product and technology at its annual general meeting in Brisbane. The ASX-listed company stated group same store sales increased 2.91 per cent year-on-year for the first 17 weeks of trading in FY19, and said it had opened 36 new organic stores this financial year so far.

Domino’s said it also plans to launch a new website and mobile order app in A/NZ in the New Year, and will shortly launch its new Summer Menu featuring 30 new products, sauces and ingredients.

The group also provided an updated on ‘Project 3TEN’, which aims to have a carry-out order ready in three minutes and deliver completed in 10 minutes from time of ordering, saying it was now targeting an average delivery of under 20 minutes per week.