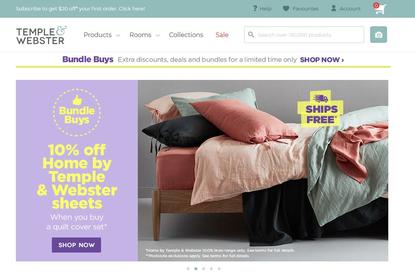 Temple & Webster will accelerate marketing spend beyond digital channels and is keen to invest in more technology innovation as it looks to drive commercial growth in the next year.

Company CEO and co-founder, Mark Coulter, made the comments as the ASX-listed furniture and homewares retailer announced its full-year financial results to 30 June 2018, edging closer to profitability two years after promising investors it would do so. Temple & Webster reported FY18 revenue of $72.6 million with a net loss after tax of $21,000.

Key to delivering these results were resetting the cost base, improving gross margins and shipping costs, reducing first-first customer acquisition and offshoring customer care and support staff, the company stated.

Highlights included an improvement in advertising costs as a percentage of sales (from 11.2 per cent to 12.7 per cent), as well as a drop in the cost per first-time customer from $58 to $54 in second-half compared to first-half. Growth was reflected across both B2C and B2B customer groups. Coulter also noted work to improve merchandising resulted in a 20 per cent increase in conversion rates year-on-year.

“Importantly, we achieved our break-even milestone through strong growth in both active customers and revenue in the second half,” Coulter said, adding first-time customers are profitable during their first year with the group.

“This means that we can now begin to accelerate marketing spend beyond digital channels to ensure more of Australia is aware of Temple & Webster,” he said.

It is unclear who is leading the marketing efforts, however, with former CMO, Sven Lindell, leaving the group in June after a two-year stint.

The retailer reported active customers of about 198,000, with 1.1 million website users per month.

Temple & Webster reported sales growth is accelerating into the FY19 financial year, with July trading up 34 per cent year-on-year.He has since taken on a role as chief digital officer at apparel business, HotSprings.

Emerging technology also played a role in the past year and is expected to drive growth in the coming year. A big one is a partnership Temple & Webster struck with US tech player, GrokStyle, to rollout its deep machine learning technology for visual search across its website.

Using the camera search button on the Temple & Webster website and their mobile phone, shoppers can take a picture of any furniture or homewares item they like in their physical environment in order to quickly find similar products from the retailer’s 13,000 product SKUs.

By recognising products are being click on the most in visual search results, the technology will then refine how it matches items to images, improving its chances of showcasing which products are most relevant to consumers.

“A picture tells a thousand words, especially when it comes to decorating your home,” Coulter said at time of launch. “Buying furniture and homewares is an emotional decision, and imagery is key to unlocking that emotion. Image search is the next step in enabling us to deliver our vision of making the world more beautiful, one room at a time.”

Other tech-led innovations on the cards for the next year at Temple & Webster include the launch of a mobile app, and international expansion through a New Zealand online pilot. In addition, the retailer is planning to expand its reach into the home improvement category, and said it’s investing in its B2B trade and commercial division.

Changes to customer care in the last year, meanwhile, saw a dedicated agent assigned to customers for the full resolution process. This resulted in significant improvements in resolution times as well as customer satisfaction levels, he said. Net Promoter Score improved 27 per cent as an average between H2 in 2018 and H2 in 2017.

“Next year we will be adding more style experts into our ‘Style Squad’ to provide free advice to help our customers make their homes more beautiful,” he stated in his report. “We will also be launching a design studio, offering a space for our customers to come and talk to us in person for bigger projects like complete rooms or homes.”

The company added it remains confident of delivering its maiden full-year profit in FY19.

“The next phase of our journey is all about growth, and it is great to see that our revenue growth has accelerated into this new financial year,” Coulter concluded. “With only 4 per cent of furniture and homewares being currently purchased online, we are well placed for strong growth for years to come.”