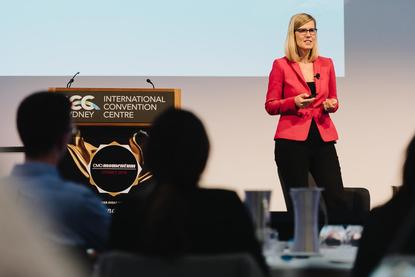 Large established companies need to take a “best of both worlds” approach to innovation in order to be competitive and meet ongoing consumer expectations.

That's the view of Daniela Simpson, an experienced FMCG executive and the newly appointed general manager of the US$1.1 billion candy and fruit snacks business unit of Ferrero USA. The business unit was acquired out of FMCG giant, Nestle, by Ferrero earlier this year in a deal worth US$2.9 billion.

Speaking at the second annual CMO Momentum, Simpson revealed during her keynote address how to innovate with the nimbleness of a startup, and how to sustain the modern marketing function.

Simpson has built her career around taking brands and building them into thriving businesses. She has also gained a great deal of experience in the M&A field by playing a key role in the sale of Nestle's Confections and Snacks business to Ferrero.

“We need to create the concept of the best of both worlds: How do we lean into what works within our larger, mid-sized company - like relying on resources and experts in the company - and then, on the flipside, how do we borrow from the world of startups that are known for flexibility and focus and speed?” she told attendees.

Simpson outlined four key components to drive innovation across the organisation and sustain the modern marketing function. They include: Implementing a sprint process; appointing a carefully selected team; having an empowered and enabled flexible approach to testing, and validating with consumer feedback; and having the right physical space.

The sprint process, for example, which was originated by Google Ventures, is one of the most inspiring and fun processes a marketer can do today, she explained.

“The sprint process is a formal process, but it’s very flexible and very fast,” Simpson said, explaining there are different versions and varieties. She has regularly utilised the five-day sprint with her current team.

“It starts on Day 1 with immersion, so plunge yourself into whatever challenge or opportunity you’re trying to tackle. You ideate on Day 2. Then, you iterate a prototype build on Day 3 and next you start consumer testing on Day 4. Then on Day 5 you prototype optimisation and do more user testing,” she explained.

“What’s crazy about this is in five days you could have a breakthrough concept, a breakthrough new innovation idea. At most major CPG companies this type of progress would traditionally take upwards of three to six months.”

Additionally, Simpson said processes need to be powered by the right people. “Processes mean nothing unless there’s the right team behind it.”

The team should encompass core team members passionate about the project including marketers and R&D; a steering committee, including a division head/CEO, operations, sales and consumer insights; and a think tank representing the voice of the consumer, but also acting as a project partner.

“It’s also very important that the sprint happens in the right physical space,” she said, emphasising that it’s important to find a space away from people’s usual desk space.

“You need to be away from the day-to-day distractions so you can focus. The the beauty of the sprint process is being able to focus energy on one goal which becomes very empowering and productive.”

Additionally, Simpson said there needs to be a flexible approach to testing. This requires team members to dispel the notion of perfectionism and the pursuit of over-testing. “You need to have a more nimble approach to validating ideas.”

How this helped fuel product innovation

A real-life example of a successful five-day sprint process Simpson initiated with her team in 2016 started with an insight around the Hispanic consumer in the US and the desire to create a candy specifically designed for that group.

“There was no real offering for the Hispanic consumer so that was the insight and the opportunity/challenge that we began,” she said.

After doing the sprint process, the team developed a new flavour of Nerds candy - a Mexican version - building the concept within five days.

“It was Nerds Lucha Grande, a Nerds candy inspired by some of the Hispanic flavours like mango chili and guava, but it was also inspired by the understanding of some of the cultural aspects of the Mexican consumer, including the love for Mexican wrestling,” Simpson said.

“It was amazing the type of energy we created within this example of a sprint. In fact, I was super proud of the team, who was awarded ‘innovation of the year’ when this product launched successfully in the US market and got good traction from the consumer.”

Up next: The 3 key obstacles stopping marketers from success

But before businesses - particularly large players - can even begin to embark on a similar sprint process, they need to know what they’re up against. Simpson flagged three main obstacles blocking innovation and growth.

One huge innovation barrier for marketers, particularly in large companies, is a “lack of flexible processes that enable speed”. “The processes are well intended, but often times they become very rigid and slow us down versus propel us to innovate.”

Just a few years ago it would take 18 to 24 months to get a new idea or innovation - even just a new flavour of a snack - into market, Simpson continued. “That was because we had very slow processes and they were very rigid, and we had to follow them.”

The second big barrier is risk adversity as it relates to the pursuit of perfection in testing and validating ideas.

“I want to perfect this new innovation and test it over and over until I remove all of the risk, but it becomes very cumbersome and in the way of speed and agility and flexibility,” Simpson said.

The third obstacle revolves around not having the “right cooks” in the innovation kitchen. Simpson said she’s encountered two extremes, both of which don’t produce the right outcome.

“You either have the right people in innovation, but a small group of people and a lack of involvement from the rest of the functions across the company like sales, finance or operations. So you’re doing your thing in isolation from the rest of the stakeholders in your company - and that’s usually dead on arrival. The innovation is never going to go anywhere.”

The other extreme is when you have the entire leadership team and many people from many different functions all wanting to be very involved as the marketer tries to create new product or services. “That can become very frustrating because they’re now micromanaging and getting in the way,” she said.

At the same time, marketers need to recognise how important it is to become demand creators.

“In order to sustain a modern marketing function at the macro level, we need to become incredible demand creators, either in creating demand for product or for services, which will ultimately result in company growth," Simpson concluded. “One of the best levers to create demand is innovation."

Check out more of the thought leading marketing content and highlights from this year's CMO Momentum conference: