CMO Momentum: What startups CMOs and the rest of marketing leaders have in common

Experienced marketing leaders from Sendle, Ovo and Weploy share their experiences of working for Australian startups, the skills required to lead and drive marketing and growth, and measurements of success 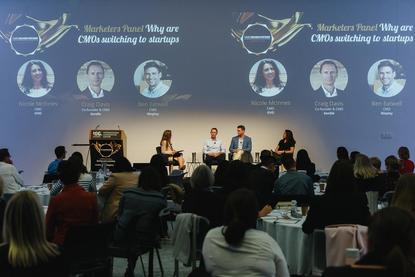 The skills required of marketing leaders in startups are not as dissimilar to CMOs across established organisations and centre around two key attributes: Listening and responding accordingly.

That’s the view of Sendle co-founder and CMO, Craig Davis, who joined a panel of experienced Aussie marketers working for home-grown startups at this year’s CMO Momentum conference to share what it takes to work for a newly established business.

While admitting it can seem ‘preposterous’ to call yourself a CMO when there’s just four of you sitting around your kitchen table, Davis said there’s no doubt being the marketing leader of a startup needs both a hands-on approach, and an ability to work at breakneck speed.

But he also described two fundamental skills to startups that are arguably key to marketing leadership generally.

“One is listening and paying attention. Which is so much easier said than done,” he told attendees. “It starts with customers but it also means employees, people in the supply chain and those on the demand side.

“In a startup, it’s so easy to let your ego get the better of you; I’ve done it a couple of times and it’s a very expensive mistake. When people start giving you feedback, what you do with that feedback often means life or death.

“So many fail because they ignore it, or they think being some sort of entrepreneurial founder means rolling over the top of it all because it’s persistence, drive and hard work. You’re determined not to let the naysayers get in the way. But if you ignore those – sure there’s noise – but separating the signals from the noise and really paying attention to it, addressing it, and responding to it, is the primary role of the CMO. In a startup or anywhere else.”

Paying attention and listening are especially important, Davis continued, when “people call your baby ugly”. “How you then fashion, sometimes pivot or redirect your efforts is critical to being there six months later,” he said.

Sendle is a four-year old virtual logistics company, providing technology, marketing and customer support services around parcel delivery nationally with a specific focus on the small business market. Over the past three years, it’s been growing at an average of 17 per cent month-on-month, and inked significant partnerships with the likes of NRMA, NAB, Virgin’s Velocity Frequent Flyer program and Etsy.

However, Davis admitted both the original concept for the business and its customer base were distinctly different to where Sendle has ended up. It therefore required an ability to curate market signals, and a willingness to pivot and adapt, to achieve growth and success.

“Sendle was an idea within an idea – we set out to solve a different problem, which was that 95 per cent of everything you buy ends up in landfill. We set up a sharing marketplace, kind of like Gumtree without money, where you could give things away to people you didn’t want any more to someone who wanted them,” Davis explained.

“We realised there was an appetite for what we were doing, because eBay users were hacking the platform just for the delivery service. So we saw a signal and responded to it, pulling that capability out and calling it Sendle.”

In addition, it took a while to figure out the customer sweet spot was small business. “While we’re happy to send presents for Nanna who wants to send a beanie she’s knitted to a new grandchild, small businesses are regular parcel senders, and ecommerce is growing faster than in the big business end,” Davis continued.

“It took us a while to get to that focus. It’s a tough discipline and process when you’ve so many things going on and stakes are high.”

Over at mobile telco startup, recently appointed CMO, Nicole McInnes, is working to build a marketing strategy across what she called “schizophrenic” communities with a passion for niche sports such as drag racing and club rugby.

Ovo is a mobile startup building out a broadcast platform first, sourcing tier-two sports content rights only for mobile as a differentiation point.

“The exciting thing is we’re getting close to small and passionate communities that mainstream broadcasters have been ignoring. And I’ve been surprised by how huge and passionate those audiences are,” McInnes said, noting drag racing has 1.4 million viewers. “We’re building the platform and giving these communities an opportunity to see content from sports they’ve never been able to see online.”

The challenge is people who love drag racing don’t watch club rugby, and vice versa. “My challenge in first couple of months has been trying to find that universal truth across our audience that will make sense to the customer when we go and market to them,” she said.

Ovo’s recent acquisition of a company doing content delivery algorithms to match users with preferred content will be a key component in achieving this, McInnes said.

“That will also cut through any traditional segmentation because it’ll be about what the customer wants to see and their behaviour around that content will determine whether they like it or not,” she said. “We are talking about delivering content you love that you never knew you loved or that you wouldn’t find any other way. That’s a unifying goal that will cut through across humans, rather than drag racers versus rugby players.”

For McInnes, the role of the CMO in a startup is mainly to drive growth. “A startup will live or die if it doesn’t grow, so that’s your first priority,” she commented. “But then it’s about making sense of what investors think and aligning that with what customers think.

“What looks good to an investor in PowerPoint and what makes sense in terms of an evaluation of a startup, is very different to a customer day-to-day and therefore will affect the growth if you don’t bridge that gap.”

CMO’s Third panellist and startup CMO was Weploy chief marketing officer and former LinkedIn Marketing and Sales marketer, Ben Eatwell. Weploy is an online skills sourcing platform aiming to disrupt the temporary recruitment industry while helping companies be more agile and support project-based work by giving them access to pre-vetted staff to work in business support and admin roles. Individuals can be hired via its online marketplace for roles from 4 hours to nine months.

The product has been in-market for 12 months and Eatwell joined six months ago to oversee marketing, supply and demand plus product.

Again, Weploy quickly learned initial expectations about who core customers would be were different to where it’s finding success. This required the company to pivot its approach.

“When we first launched, we were targeting smaller companies like startups as a way to be a cost-effective way to hire people. But it’s actually some of the bigger customers like PwC, VicSuper and Lonely Planet who are using us now to build agility into their workforce,” Eatwell said.

On top of this, Weploy was originally focused on reactive staffing needs. “It became obvious it was a difficult thing to scale – how do you know how many people are sick, and how do you get in front of everyone?” Eatwell asked.

“We pivoted to thinking about leveraging on-demand staff in a more operational sense, and around agility and project-based work. That saw an immediate improvement in business metrics and health. We still have that reactive need and we’re trying to figure out how to service that and from a marketing point of view, how we position that. We’re not there yet.

“From an operational side, we thought HR initially would be the core customer… but we realised HR are not particularly agile and if it’s not part of their processes, that’s a roadblock. One of our things is that we don’t provide people with CVs, because we do all the vetting and invest a lot in matching algorithms to the jobs and skills of people on the platform. When someone posts the job, that’s the job offer. Someone accepts it and that’s when you find out who’s working for you.”

While the right formula is identified, marketing is playing a critical role in testing and understanding who is engaging with the platform, who’s getting through the process and through that, developing an ideal customer profile.

“That’s the demand side, then there’s the supply side as well, as we’re building a community we are trying to empower, we need to understand them better,” Eatwell said. “I’m hoping in a year’s time, we’ll have a much better understanding of that ideal customer profile.”

Equally, all three CMOs have had to rethink and evolve their measurements of success to cope in the startup world. At Sendle, it was clear the team needed metrics that worked for its business model, rather than the acquisition and lifetime value metrics of a SaaS-based business, or the aggregation metrics of an aggregation-based marketplace, Davis said.

Marketing now is identifying channels that perform below a particular cost threshold, then increasing spend on those things and see if they hold up as Sendle scales.

“The combination of that at a channel level, making catalysts work through the full funnel then contribution to brand – those three things are key in what we measure,” Davis said.

When Eatwell first came into Weploy, demand gen was the metric being used but it wasn’t accurately showcasing sustainable success.

“The first thing was identifying what North Star metric we were going to communicate to the rest of the business, then also four key metrics to show health,” he said. “Revenue is one, but it’s also the utilisation of the platform – how many jobs are being posted, how many ‘wemployees’ are active each month.”

McInnes cited revenue and being self-sufficient as big milestones for startups. But for inaugural marketers, the most exciting thing she pointed to was the “luxury of turning on channels in a strategic way”.

“You put a foundation of digital in and just start to add other channels or different markets in, and you suddenly have this beautiful attribution model where you know for your business and customers what channels are working,” she said. “You can learn so much about the marketing and media mix this way that you can’t learn that in big corporates. In a big organisation, it’s too risky to turn anything off given the volume you could lose, and even if you did, there’s so much else been happening for so long, the halo effect could still be playing out for months.”

McInnes encouraged all marketers to try a startup at some point in their career. “You learn a lot you can’t learn in any other situation,” she added.