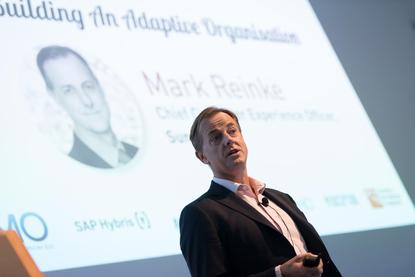 Among his achievements was the integration of Suncorp and Promina customer and marketing functions, creating a single view of the customer across Suncorp Group, and overseeing significant improvements to better leverage the Group’s brand and customer assets. Reinke was also a member of the senior leadership team for eight years.

Thanks to these achievements, Reinke was ranked #1 in the inaugural CMO50 list in 2015.

Prior to joining Suncorp, Reinke held senior marketing roles with Telstra. Reinke also spent 14 years with the BHP Group, including responsibility for development of new markets in the US and Mexico a range of senior roles responsible for profit and loss accountability in key Australian markets.

“Mark has made a significant contribution to Suncorp over almost 14 years, including in the previous role of chief customer experience officer, as well as other senior roles within the business,” Cameron said.

“I would like to acknowledge and thank Mark for his leadership and contribution to Suncorp, and wish him all the best with his future endeavours.”

The move follows the appointment of Pip Marlow, former managing director of Microsoft Australia, as chief executive officer of customer marketplace in October last year; and the appointment of ex-Service NSW CEO, Dr Rachna Gandha, to a newly created role of executive GM of commercialisation and implementation.

Suncorp reported group top-line growth of 2.5 per cent for the half to 31 December 2017, and net profit after tax of $452 million, down from $537 million year-on-year. Among the highlights were a 3.9 per cent increase in Australian home and motor insurance gross written premiums (GWP), bank lending growth of 8.7 per cent, and a 56 per cent rise in underlying profit on the Australian life insurance division.

Cameron said an increased focus on the group’s four strategic priorities, and in particular, elevating the needs of customers, had been instrumental in the results.

Suncorp’s four strategic priorities are ‘elevating the customer, create the marketplace, maintain moment and grow the business, and inspire our people’. Its brands include AAMI, GIO, Bingle, AA Insurance and APIA.

To do this, the group has been moving to a marketplace approach, uniting five previously separate businesses into one business model and commencing plans to create an ecosystem of brands that leverage integrated third-party components and a common digital platform to better connect with customers. This involves building an ecosystem of partners that will provide a suite of relevant products and services and that customers can tap into in one place to suit their individual needs.