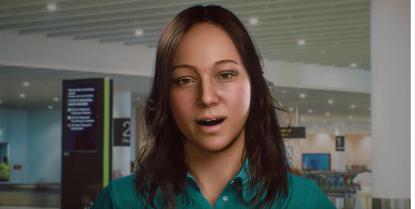 Visitors arriving into Auckland’s International Airport are getting a very hands-on experience with virtual assistants after the airport launched what it claims is the first ‘digital’ biosecurity officer worldwide.

Vai, which stands for virtual assistant interface, started her official employment onsite last week as part of a trial of the technology in the airport’s biosecurity arrivals area. The trial is being conducted by the Ministry of Primary Industries (MPI) in partnership with Westpac’s Innovation Fund and is about taking some of the load off its officers during peak times, MPI detection technology manager, Brett Hickman, said. Vai will do this by screening the public using simple biosecurity questions.

Vai is the brainchild of New Zealand company, FaceMe, and is based on avatar technology that uses biometrics to learn human interactions, as well as natural language processing.

“Digital employees also learn from every past interaction to sharpen and perfect their skills,” FaceMe CEO, Danny Tomsett, said.

“Vai is highly conversational and has been trained through every interaction, as well as data available on the website. She embodies the AI experience with human-like qualities, including a friendly personality and emotional understanding.”

While Hickman said nothing will replace human interaction and relationships, having Vai in place frees up officers to deal with the “really important aspects of their role”.

The Westpac Innovation Fund is a $10 million initiative established jointly by Westpac and the New Zealand Government. Westpac head of public sector strategy, Brent Chalmers, said the fund saw value in supporting the trial of AI-based avatars in different parts of government.

“The aim is to help create services and experiences that help grow a better and more innovative New Zealand,” he said.

Findings from the trial are expected to be published in April.

FaceMe isn’t the only New Zealand-based company getting into the AI-powered avatar space. Soul Machines, another startup in the land of the long white cloud formed by Mark Sagar, has created a number of avatars including Nadia, a virtual human voiced by Cate Blanchett that’s now being trialled by the National Disability Insurance Agency (NDIA). Nadia was designed to operate across multiple channels from the outset to create a consistent interaction for clients, with the face being just one representation.

Another example of Soul Machines’ virtual humans in action is Sophie, a pilot customer interaction project for Air New Zealand.