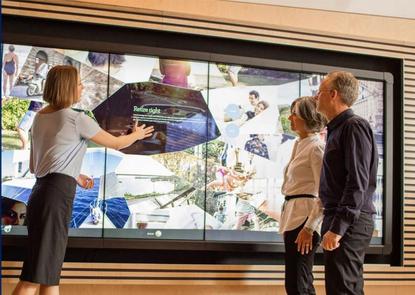 AMP’s CEO says further investment into technology capability such as its Goals 360 advice platform and Salesforce CRM are transforming the financial planning process for customers and the advisers supporting them.

Like many financial sector organisations, AMP is looking to digital capability as a way of driving further growth while repositioning the business around customer-based outcomes. A key one for AMP is its Goals 360 platform, which debuted in early 2016 and is available across its AMP Advice business.

The Goals 360 platform looks at the financial position of a customer and then uses real-time probability modelling against 1000 different scenarios that could potentially impact a customer’s financial goals. This is showcased to the client via interactive technology supported by human coaching.

It’s part of a wider multi-year effort across AMP to reposition the business model around an end-to-end, goals-based customer approach, work that kicked off with the appointment of a dedicated chief customer officer and investment into core technology infrastructure from 2013.

AMP CEO, Craig Meller, said the platform gives customers a greater position on the likelihood of achieving these goals compared to the traditional consulting model, and in an easy way.

“It’s also a higher quality type of engagement, and with the automation, is much more efficient for the consumer,” he said.

The Goals 360platform has now been rolled out to 30 locations and 200 advisors under the AMP Advice business. Further technology releases are planned this year, as well as a roll out to the extended adviser network in 2019.

Meller said initial feedback around Goals 360 had been very positive. He highlighted Net Promoter Score (NPS) for customers that have gone through the experience as +60, a result way above what’s seen generally across AMP more broadly. AMP has also seen improvements in SOA production times, and service cost reduction.

Across the business, AMP also saw an 11 per cent rise in combined NPS over the full year.

“We think it’s a far high-quality type of advice, but secondly, because of the automation in the system, it’s much more efficient for the advisor,” Meller said. “This will significantly reduce times to provide advice to consumers. Finally, compliance is built-in, which reduces compliance cost significantly as well.”

AMP’s next priority is to build out a practice management and CRM solution using Salesforce technology. This will integrate directly with AMP, Goals 360 and all product and workflow solutions.

Deploying Salesforce as a CRM system for advisors will not only give advisors a better workflow approach, it also delivers further efficiency benefits, Meller said. Once in place, AMP will also make the platform available to its entire advisor franchise network. Salesforce is being rolled out in the first half of this year.

“By investing in these advice platforms, we’re positioning our business to win from the technology disruption underway across the wealth management industry,” Meller said. “Goals 360 enhances the advice experience for customers, utilising interactive technology to explore and prioritise their goals. For advisors, it delivers a more efficient way to provide advice, allowing them to service more customers.”

Meller said Goals 360 is gaining international interest. For example, AMP has been working with United Capital to export the operating system under licence to other wealth managers.

Wealth management was a financial highlight for AMP as a result in FY17, with net cashflows rising 177 per cent to $931 million and assets under management increasing 8 per cent year-on-year. AMP Advice and SMSF achieved 10 per cent additional revenue growth.

For Meller, AMP’s results show strong recovery in underlying profits and a solid operating performance across the business.

“Overall, it’s a solid result that shows the strong headway we’re making in delivering our strategy,” he added.