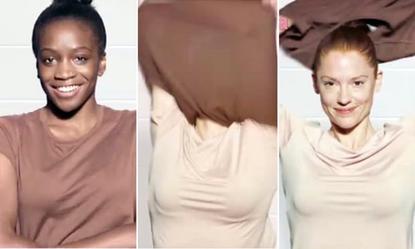 The social media outcry over an advertisement for Dove body wash showing a black woman removing her top to reveal a white woman was too harsh on the brand, several creative experts are claiming.

When the Dove creatives put together their TV ad campaign, they obviously hadn't anticipated the abridged version on social media would create such a huge social backlash. The original TV ad in the US showed women of various ethnicities removing their T-shirts and turning into each other. But when cut as a 3-second video clip posted on Dove's US Facebook page, the ad appeared to show a black woman turning white.

Expert creatives from leading advertising and marketing agencies have come out in support of Dove, saying public backlash was overly harsh on a brand renowned for celebrity diversity. Instead, many said Dove should be commended on putting out the fire so quickly.

“I think we need to give Dove a break here,” The One Centre’s founder and CEO, John Ford, told CMO. “Nothing in its 13-year history pioneering the 'Real Beauty' message and platform supports the idea that this is deliberately or subliminally racist. I don’t even think it's a poor choice of sequence from an idea perspective. It conveys diversity. And black comes first. The star didn’t think it was racist even after the furore broke. She was proud to be first and stood her ground.”

UDKU strategy partner, Colin Jowell, said it’s easy to be smug and laugh and point fingers. "But the truth is these days it’s really hard to cut through without creating at least some risk of fall out, whether that’s anticipated but acceptable risk or completely accidental," he commented.

“Accepting that reality and having a smart, quick recovery process on hand is probably the best you can do," he said. "And Dove certainly deserve credit in that regard for putting out the fire pretty quickly.”

For Ford, the real issue is the ‘space’ social allows for explosive accusations against people, brands and organisations – even those whose whole existence has been dedicated to a cause. Within hours brands can be questioned, or worse, presented as a façade for some deeper evil or unrepentant bias.

“Dove and Unilever could do little else but apologise and put it down to a poor selection and edit,” he said. “Yes, they could have done a 360-degree stress test on all possible risks or misinterpretations from the social teaser, but remember, to even see this through a racist lens is counter-cultural for them. Perhaps the spotlight should really be turned around onto those who claim it is so, to ask the question: What in 13 years have you, on balance, seen from this brand that deserves such a drilling?

“Nothing Dove does for me supports such a vicious, accusatory frenzy. I think they’ve been blindsided by their own well-meaning and sense of momentum with the platform, and not considered carefully enough how everything can be manipulated to give the attention-hungry a mouthpiece. Racism and deep bias is a real issue. I just don’t think it is present here unless you really want to see it.”

No room for error for brands with purpose

For BMF head of planning, Ali Tilling, much of the focus and debate in brand strategy at the moment is about the importance of brand purpose, and a ‘higher reason’ for a brand to exist. A brand like Dove not only has taken a stance in that space, it has fuelled the power of purpose through celebrating beauty in all forms, inside and out, running counter to the category it lives in, which is historically all about superficial ‘appearances', she said.

“For a brand that is a multi-million dollar business, moving at speed, it’s a lot to live up to - and people are within their rights to judge brands that set themselves up in that space that then undermine the very purpose and ideals they’ve been touting for years,” she said. “After all, the higher you set you yourself up, the further you fall.So when you are a brand that is all about what is on the inside that really counts, there’s no room to get it wrong.”

Tilling's advice on minimising brand risks such as this in future is to take a step back to stop and think about the lasting implications of a campaign on your brand. And this includes how creative is used on specific digital channels.

“We’re more sophisticated about the specific needs of social than ever before, yet there is still a tendency to end up rushing the social media elements at the end, cutting down and slightly adapting other parts of the campaign for it,” she said. “Often, less time is spent crafting, possibly because the attitude is that social is so fleeting, so why spend the time? The truth is, when something is controversial or wrong its impact can definitely last for a long time.”

Other experts agreed there’s no need to jump into a test-and-learn panic. But all advocated crafting social briefs separately, more for the data and targeting potential, however, rather than the possibility of causing offence.

“The knee jerk reaction to this would be that this kind of thing demonstrates the need to ‘test everything’, but it’s false security. Sometimes it’s actually an executional nuance that tips the scale from great idea to outright offence, so the only way to do this reliably may happen at a point where it’s too late to change,” Jowell said.

“You’re actually better off treating it the other way around: Consider the social media impact of a TV brief. Because if you get it wrong, you’ll create a social sensation of the worst kind even if that was never intention. Just ask Pepsi and Kendall Jenner.”

The Works creative partner, Paul Swann, doesn’t believe there should be a hard and fast rule that says you can never use a TVC or a cut down of a TVC for social ads. However, he highlighted doing so without considering how the medium works or without reviewing the content to ensure it makes sense in its new format has the potential for problems like this to arise.

“With more channels and potential outputs, there is now a greater volume of creative work to be reviewed and scrutinised. However agencies need to remain diligent in their sign off and quality control processes otherwise mistakes will happen,” he said. “A lack of knowledge is often the issue, so by investing in continually educating their people about new channels and formats agencies can ensure that errors are less likely to occur and the medium and content are working harmoniously.”

At the same time, Swann agreed there are crucial channel specific nuances that mean a bespoke brief for social executions is often preferable. This is not just to avoid blunders like the one Dove experienced, but to also maximise the engagement and cut through of an execution within social environments.

“A dedicated social brief enable you to more specifically detail the fundamentals of the channel so that work can be created optimally in terms of aspect ratio, sound design, grading and duration,” he said. "Increasingly, we are shooting for square or portrait formats, designing sound to be listened to on headphones through a binaural mix and grading for mobile screens.”

Different briefs won’t necessarily help, Tilling argued, unless a brand needs two entirely separate strategies and ideas. Instead, he advocated for one ‘long idea’ that can build all aspects of the brand, be interpreted brilliantly across different channels, and comes from one brief.

“Some of your inputs might need to change though - it needs to respect the medium and how people interact in that channel,” he added. “And there is definitely a case for taking a long hard look at brief templates, at the briefing itself, at how the agency stays close to the brand and audience across all its channels, to make sure that social media isn’t an afterthought, a rush adaptation job at the end of campaign production. “

Prevention is better than cure

For creatives who want to prevent such a disaster from happening again, they should try examining the evidence base and existing ‘warning signs’ from past campaigns, Jowell continued.

“Whether that’s well-known precedent from previous work or emerging insight in behavioural economics and neuroscience, that evidence base can save you from nasty mistakes and also make the work more effective,” he says. “In this case, it's precedent: Issues with mixing race and soap are so well documented, look at Google Pears racist soap ad.”

“It’s unfortunate for this to have happened to Dove, which has successfully established strong meaning around ‘body positivity’ and reframed the conventions of beauty marketing over the past decade,” she said.

“I think it’s a classic case of brands and agencies having an ‘inside-out’ perspective rather than ‘outside-in’. We spend so much time in our brand worlds and category worlds, that we can forget that there is a real world, and in the real world, things are much more nuanced, complex and human. And it doesn’t help that the marketing and ad world can be homogenised itself.

"We need more diversity within agencies whether its race, gender, age or background, who bring different worldviews into the decision-making room and to identify these potential fails before they happen.”