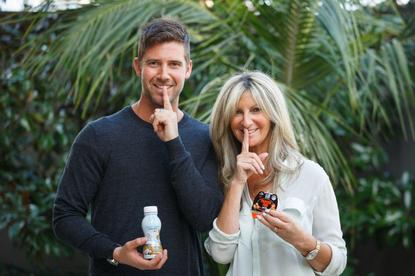 Although Slim Secrets has been exporting for 10 years to a handful of countries, in the past 18 months momentum has grown significantly, with e-commerce enabling the business to reach audiences across 15 countries including China.

CMO caught up with Sharon Thurin to discuss her journey into the market and her secrets to success.

It was working with her husband in pharmacies while the kids were growing up that gave Thurin a love of the health and wellness industry. She also became involved with doctors in an anti-ageing clinic.

“As a result of that, I started working as a health and wellness coach, and really saw a gap at the time in the market for indulgent, tasty, healthy, nutritionally balanced snacks I could suggest to my clients to eat between meals,” she said.

The business was initially only meant as a hobby. “But as you can see 10 years later, the hobby took off. It didn’t take long and really it was at a time when there was nothing else like it on the market.”

Thurin said the thing she’s loved the most about building Slim Secrets has been the marketing.

In the early days, the most effective activity was what’s now known as influencer marketing. Slim Secrets was involved with the Oscars and celebrity gifting nine years ago, getting photos and gifting with the stars. Since then, there’s always been an experimental bent to the group’s marketing initiatives, Thurin said.

“Being a small brand at the time, and a new brand with very little marketing funds, we needed something that actually helped us stand out from the crowd,” she said, explaining the company also sponsored the Miss Universe Pageant as a way to get an edge.

Today, the company’s marketing strategy involves a blend of traditional tactics with a big focus on digital.

The company is doing a series of videos with brand ambassador, Angelique Kerber, German professional tennis player and former world No. 1.

Thurin said the company uses MailChimp for CRM, and is working to improve its data analytics capabilities in order to obtain greater customer insights and data. To encourage more sign-ups to its database, Slim Secrets is collaborating with a number of businesses, including Health and Fitness Holiday Group to run a global competition to win a trip to a health resort in Phuket for October.

“We’re also working with a company on our Facebook advertising around lookalike audiences of people who have shopped in the supermarket, potentially tried our products and want to buy them in bulk,” she continued.

In catering to a global audience, Thurin said the trick is to specialise and tailor campaigns, in terms of images and wording, to suit each country.

Expanding into China, however, was not without additional challenges. As well as cultural differences and regulatory changes, there’s a need to educate the customer and ‘sell the Slim Secrets dream’ to the Chinese consumer, Thurin said.

“We’ve had to learn that different countries require different marketing strategies. When we launched in China, we did a three-month awareness campaign. That was a cross between digital, banner ads, WeiBo, WeChat, and sampling,” she explained.

“Another of the important things we’ve learned with our marketing being in 15 countries is that we don’t have an unlimited budget. We need to ensure that what we do, as much as possible, actually can be translated globally. That’s why we looked at someone like Angelique as our brand ambassador, because most of the world is interested in sport.”

Thurin agreed digital is the lifeblood of any organisation, particularly ones eyeing global expansion.

“Digital is essential and important to any global marketing strategy,” she said. “We’re living in a new era where the digital future is where everyone and everything is connected. With Singapore, for example, we can connect with them in the blink of an eyelid.”

Slim Secret’s goal on the social media front, meanwhile, is to be subversive and in incentivise engagement, according to business manager, Cassie Healey of The Word Collectiver, the Australian agency managing the brand’s social media content.

“Whether that incentive is a prize through competition or as simple as giving back and engaging in conversation – offering education and a value take-away – or recognition of user-generated content, the combination of these tactics lead to genuine engagement and therefore higher conversion rates,” she said.

Moreover, Slim Secret’s success is based on the strength of the community. “We encourage health conscious followers to engage with both us and each other, in the spaces we provide. We find we get a really good response from our followers when we communicate this message organically, resulting in higher engagement across our social channels.”

Asked what converts ‘likes’ of a particular post into ‘followers’ - locally and globally - Healey said it’s all about the emotional connection. “Anybody can have an account filled with objectively good images. It’s about going to the deeper level and making people think and feel through content.”

Building an emotional connection is particularly vital in the Chinese market, according to Jamie Thurin, who said digital marketing has been a major focus for Slim Secrets in ‘selling that dream’ and educating consumers about its protein-based products. He noted WeChat, Weibo and KOLs (Key Opinion Leaders), have been particularly key in helping raise the brand’s profile both in China and Australia. “For a business that started locally in Australia, selling to a few juice stores, just to see your brand exposed to such huge numbers of people on the largest ecommerce sites in the world, it’s very rewarding to see that and to have people asking you daily about your successes,” he commented. “It’s a very exciting time for Slim Secrets and for other SMEs wanting to do business with China and other businesses overseas. With the increased ability to access technology, if you’re ever going to give it a shot, now is the time to go glocal.”

The goal is to align the company’s local social media with its Chinese social media as well as focus more on the local Chinese community in Australia (for example, the Daigous).

“We wanted to make sure our marketing was relevant and targeted to those that will actually buy our products,” Jamie Thurin said. “We also had experiences over the past three months where we ran an awareness campaign in China and found that it was quite difficult to measure the success as there was little connection between our marketing and our sales. We did our best to do this but found it very challenging and struggled to see whether we got a return from our investment.”

The next step is setting up functionality in WeChat to allow customers to not only find where they can buy products locally, but also allow them to buy directly via the messaging platform.

“We need to make sure that we have information readily available for our consumers as we are not only a new brand in China but also a new category,” Jamie Thurin added. “It is very important our strategy focuses on educating the consumer on the benefits of healthy snacking and protein based products. And this is where our regular WeChat and Weibo posts are very important.”