CMO Momentum 2017: Airbnb reveals how to build a purpose-led superbrand

‘A customer-led organisation starts with a purpose which drives activities and unifies actions:’ Hassell 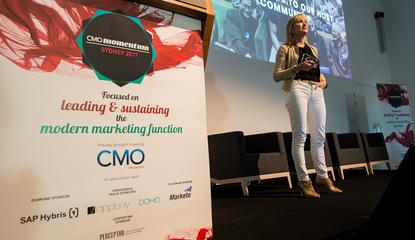 Building a winning culture inside Airbnb is a combination of understanding brand purpose, knowing what to stand up for, and fostering core values, according to global head of customer experience, Aisling Hassell.

Speaking at the inaugural CMO Momentum in Sydney, Hassell shared how the digital upstart has built a purpose-led superbrand and what customer leadership is all about.

At the time of launching Airbnb, the founders came up with six core values that lasted for the first couple of years, she said. Just recently, these were toned down to four. The first is to ‘champion the mission.’

“To be a purpose-led company, you have to all be on-board the vision, you have to have long-term thinking,” Hassell told attendees. “You all have to prioritise the things that further the mission.

“Another core value is be a host. You can’t be a hospitality company, driving a host community, and engaging with a host community, without actually acting like a host in your day-to-day. So being a host internally, and at Airbnb, is all about being open, being communicative, listening to others, being caring for others and making sure they belong.”

Airbnb’s third core value is being a serial entrepreneur, a culture that’s fuelled by taking risks, owning and learning from mistakes. The fourth value involves embracing the adventure, Hassell explained.

“We’re not scrappy anymore, but it’s still a startup mentality,” she said. “‘Embrace the adventure’ is always trotted out when it’s chaotic. . . but we are trying to understand that it’s a dynamic environment and we need to enjoy the optimism.”

The role of employee in brand engagement

Brands looking to become customer-led organisations need a clear purpose, Hassell said. And it all starts with employees.

“At Airbnb, we have a clear and simple purpose: Creating a world where anyone can ‘belong, anywhere’. It is quite staggering when you actually unpack that a little bit, in terms of the level of that ambition, especially given today’s climate,” she said.

“It’s one thing to have a tagline, but really the sense of belonging is at the centre of everything we do. We take an internal mindset around creating a world where we belong, and then extrapolate that out to our broad community of hosts and guests around the world.”

Focusing on the employee experience covers everything from the on-boarding process to the day-to-day in the office, Hassell said. Space, for example, is very important, and she said the company’s Sydney office mimics its ethos in terms of fostering a ‘sense of belonging.’

“Anyone can sit anywhere, but you have your own neighbourhood and it is typically with people that you work with day in and day out if you’re on a team or in a particular function.”

Additionally, building a trust-based system - trust between a host and a guest and trust between the community and Airbnb - is also crucial.

“You have a platform where strangers stay in other strangers’ homes and you really want to make sure underpinning all of that is a trust-based system, which is how we ensure who we’re dealing with,” Hassell said. “We encourage the communication with the host and the guest and we do a lot of trust-based work in terms of fraud prevention.”

Looking back over Airbnb’s success, Hassell said it wasn’t until 2015 that the branding and messaging of belonging took on meaning.

“That’s when the founders really said,’ I don’t think we know what we’re about. We really want it to be articulated,” she continued.

The founders opted to refresh the brand and selected the Belo logo, a symbol of belonging. Admittedly, the symbol did get lots of positive and negative attention on social media, but Hassell chalked it up to “engagement.”

“The symbol and the statement tie us together around purpose. This sense of belonging is not just from a brand statement, it also weaves its way through all of our actions,” she said.

With the brand focus of belonging in mind, Airbnb has embarked on several notable campaigns. One was a message of inclusion aimed at standing up to the proposed travel ban in the US, which aired during the Super Bowl.

“One of the things with a purpose-led brand is you have to step up sometimes when you see the purpose being challenged,” Hassell commented. “At your roots, if you really do fundamentally believe you want to create a world where you belong, at times when, whether through the political environment or other issues you see and that is being challenged, it is a time to stand up as a brand.

“We saw this at the beginning of this year with some of the political moves by new US President, which were horrific to all of us as onlookers, with the travel ban. We decided it was important we made a statement as a brand that we believed we stood up for.”

The Super Bowl effort became the third most trafficked in terms of media pickup behind Coca Cola, and the #weaccept hashtag the most trended on Twitter.

“Not only was it a reaffirmation of our brand purpose to our community and the broader population, but it was also reaffirmation of what we’re about internally and it had a huge upside in terms of realigning and aligning everybody to the mission,” Hassell said.

Airbnb has also rolled out a new platform for refugees, dubbed ‘airwelcome,’ to help refugees and displaced people find accommodation.

“Historically, very early on, we created a disaster response tool. So if there was a natural disaster and people were without housing, other people in other jurisdictions could open up their houses for zero price. So we enable them to find temporary accommodation for no fee.”

While only a few months old, Hassell said the aim is to house 100,000 displaced people in the next five years.

“There was a very specific goal of the campaign and that was to build supply in constrained areas of Sydney, especially around the parade route. Typically, we would have a supply shortage,” Hassell said. “The brief to the whole team was just go nuts - embrace every tweet. Make sure we go and engage with the community in a very active sense. Let’s make sure that we stand up for what we believe and challenge homophobic comments and make sure we drive exclusivity.”

The campaign had global support. “The nice thing about the scale of my team is they are across every geography in 14 sites, with 5000 people globally, which meant we were able to give global support for connectivity and ongoing dialogue and discussion throughout the campaign,” Hassell said.

Admittedly, while the results were overwhelmingly positive (there was over 100 per cent response rate and 459 engagements over Facebook), there were naysayers and critics. But “standing up for your brand, for your purpose, just makes responding to that easier”, Hassell said.

“It created a lot of banter, which humanised the brand and made it fun, both for the team doing it and also for our community,” she said.

These and other campaigns show just how important a purpose-led strategy, in concert with effective execution across functions, is critical to drive home success and unifies actions.

“In our case, when there’s discrimination against race, gender or sexual orientation, when there’s blockers like travel bans, you need to stand up for what your brand stands up for, and be true to that. Then you can see all of the unifying actions that can cross all functions of the company - that’s when the magic happens.”