Why it's time to start planning your marketing around machines 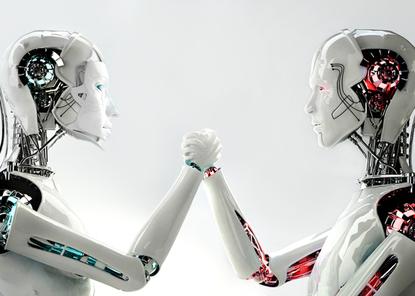 Algorithms have taken over who we connect to, what we buy, where we go, how much we earn and even who we marry. And marketers who don’t start hatching a plan for how they’re going to tap this new phenomenon are at risk of giving competitors an unassailable advantage, according to We Are Social.

Speaking at the Vivid Festival in a talk entitled ‘Marketing to the Machines: Why Algorithms Will Define the Future of Everything’, We Are Social’s global consultant, Simon Kemp, and Australian MD, Suzie Shaw, investigated the pervasive nature of algorithms, and how they are already starting to change the nature of marketing and brand engagement.

The pair claimed it’s just a short matter of time before marketers must market to machines, and even suggested we’re not far from a world where algorithms are writing algorithms that can mimic human empathy – and surpass it.

Shaw pointed out news sites such as Buzzfeed, social media giant, Facebook, Google Maps and dating apps such as Tinder are all powered by algorithms today, while on the marketing front, programmatic advertising and social media marketing are both examples of algorithms in action. Shaw and Kemp identified algorithms as a finite set of unambiguous instructions performed in sequence to achieve a goal.

Algorithms have been helped on their way by the proliferation of connected devices, the pair said. The reasons why we’re growing so reliant on them is because they help us manage choice, improve our confidence, increase efficiency by automating lower interest tasks, provide a source of inspiration, and make difficult decisions on our behalf.

“Our future success of businesses is going to depend on our ability to influence the algorithms,” she said.

As an example, Kemp noted emerging connected, voice-controlled devices in the home such as Amazon’s Alexa and Google Home. These could start to impact the product and services we choose and challenge the brand status quo.

“If you think about the way you talk about the groceries you guy, you don’t say Heineken, Lays and Ben & Jerrys, you say beer, chips and icecream,” Kemp said. “Most people think – and shop – in terms of needs and categories, not brands. But there are awkward twists to this… if I just say to Alexa ‘add beer to my cart’, which brand is it going to add? What brand of beer is it going to choose for me or find out which one I want?”

Kemp outlined four scenarios: The device will ask the consumer; it will fall back on recurring choices and the brand you bought last time; it will select a brand based on social recommendation engines; or consumers will just let the platform decide based on a number of algorithmic inputs, such as IoT sensor information, what they read and ask about, behavioural attributes and Facebook likes.

Kemp claimed the last choice is the most likely. “Where it gets really interesting is when it’s a new category. If I don’t have confidence in my first choice, I’m very happy, at least for the first instance or few trials, to let the algorithm decide for me.

“As Amazon, you’re going to see how this is a good opportunity to work with brands to create value for all sides of the equation.”

As the world of algorithms grows in power and scope, Kemp also pointed out ‘four horsemen’ are dominating the landscape: Amazon, Facebook, Google and Apple – again, largely thanks to connected devices.

Of course, Google’s answer to coping with such unprecedented levels of data is to get algorithms to analyse the data for them, Kemp said. This is where artificial intelligence and machine learning come into the frame.

The threat of AI

So are these intelligent technologies a threat to humanity? “We must be careful not to conflate AI with human biological imperatives,” Kemp said. “The survival of humanity as a species doesn’t have any competition from AI.”

The threat is more what humans try and do with these technologies, Kemp said. He noted a recent US Department of Defence report that stated: “AI warfare is inevitable”.

Kemp said one answer is to build empathy into AI, and an ability to understand what another person is feeling so as to interact with them in a manner appropriate to their mental and emotional state.

“Empathy is learned and it varies by culture,” Kemp said. “Because it can be learned by human, it means we could encode it.”

It might sound like science fiction, but empathetic machines already exist, Kemp said, via machine learning deployed in call centres, as well as SoftBank robots being trialled as concierge services in Japanese hotels. The latter machines use cameras and audio to identify facial expressions, tone of voice, and interpret a consumer’s emotional state.

The value of empathetic machines depends on how well it’s encoded into algorithms, Kemp said. One of the challenges, however, is programmers invariably put some of their own personality in the code.

“We’re leaving cultural artefacts of ourselves as well. Empathy is individually and culturally subjective. It’s going to shape the early bits of code and for the rest of time,” he said.

Provocatively, once algorithms start writing algorithms that can perfect empathy, Kemp questioned whether we’ll get to a point where machines will want to interact with us.

Marketing to machines: 3 tips on how to prepare

So given the potential havoc algorithms could make to brand strategy, can marketers proactively prepare?

Kemp’s first piece of advice is to “understand where you stand”. He also recommended brands stop thinking of the ‘four horsemen’ as a danger and start partnering with them.

“They need us as much as we need them,” he claimed. “They’re not just helping us to sell stuff… the data and insights should help us improve our offerings as well and ideally, we end up with products that are so good, we need less advertising for them.”

But Kemp cautioned brands to keep consumer privacy in mind and said the solution is giving data ownership back to the individual.

“Like money, our data will soon be the same type of currency. We will spend and share our data when we think it is worthwhile,” he said. He pointed to bleeding-edge technologies such as blockchain as potential tools to store and share personal profile data.

Shaw said it’s also about understanding algorithms as a new type of audience. “Consumers are inherently irrational and we have been effectively marketing to them for many years. If we treat algorithms as another audience, we are halfway there to cracking the way to effectively do this,” she claimed.

“Understand how it behaves, what does it like, and how do I make sure my product and brand is positioned well within this new world of algorithm interactions.”

While machine learning may be creating the next big business opportunity, UK agency, Contagious, predicts it could only be around for the next 3-5 years.

“This is because algorithms are already starting to write algorithms. And at a certain point, there is an unassailable advantage,” Kemp said. His final advice: Work out how you’re going to move up the curve.

That doesn’t necessarily mean becoming an algorithm expert. “What it does mean is you need to start drawing up your brand plan. What that looks like for your individual business will be totally specific to you,” Kemp said.

Through all of this, creativity and brand differentiation remain vital, but Kemp and Shaw suggested the way we value brand mechanisms will change in a world where algorithms rule the roost.

“Packaging for example, may not be as important as it is currently – the definition of how we differentiate our brands will change quite dramatically,” Kemp predicted. “This still requires great creativity but it’ll be different output to what we have now. We’ll need to create amazing code instead of amazing video.”