How National Geographic is innovating its brand with purpose 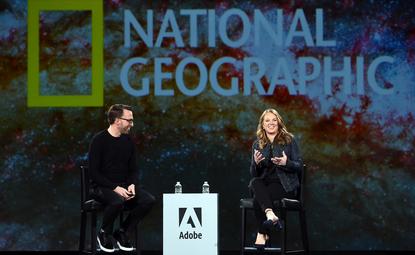 National Geographic's Jill Cress on stage at the Adobe Summit 2017 with Adobe EVP and GM of digital marketing, Brad Rencher

Over the last 130 years, the National Geographic brand has built strong emotional engagement with people all over the world, buoyed by its iconic and visually compelling print product.

National Geographic Partners CMO, Jill Cress, is tasked with taking that emotional connection and making it more relevant for today. To drive this ambition, she’s drawing on consumer connectivity and technology innovation, customer data, and the brand’s portfolio of television, print, digital and social properties and content.

CMO caught up with Cress at this week’s Adobe Summit in Las Vegas to find out more about the brand’s transformation and how she’s working to better understand customers to achieve relevance.

National Geographic is an old brand but a new company. The organisation struck a US$725 million deal with 20th Century Fox 18 months ago to hand over 73 per cent of its media business, and is now known as National Geographic Partners. With the new ownership arrangement comes a bold ambition to relate to a new generation of explorers.

Cress, who joined as marketing leader last year, said the first priority has been building out a comprehensive brand strategy that every employee and supporter of National Geographic can align to. Over the years, the company added on different verticals, taking the brand design and augmenting it, adding new logos and channels. Cress said it’s time to unify them.

“The discussion is how we can unlock the power of the ‘yellow border’, as we call it,” she said. “Like any great brand, you have to know where you’re going. We are a well-known and revered global brand but it’s about how we become one of the most beloved and relevant global brands.”

There are a lot of positive attributes already in play, Cress said, not least of which is 72 million social followers. “When you ask consumers, we are brand with integrity, that represents quality, and we are trusted. But we’re not necessarily as entertaining as we want to be, or provocative,” she said.

“We feel that so many of the things our audiences are interested in, such as human exploration, discussions around gender, the climate, should allow us to be more relevant. We should be front and centre on those topics.”

To help, the team has crafted a new expression of the brand – ‘Further’ – based on the mindset of its explorers and photographers. “This is about allowing the brand to have a point of view in addition to the products, the shows we put on our channels, and how they live together,” Cress said. “We want to bring together the functional and emotional connection with consumers.”

Cress is also building out the global brand strategy team. Previously, brand employees sat in either the National Geographic Society or in each channel. In addition, more investment is going into agency partners and strategy.

“It’s about bringing integrated strategies into play,” Cress said. “We have incredible TV marketers who do great jobs of launching shows, driving tune-in through smart media investments, and driving conversations through social. We’re now working in a much more integrated way.”

For example, marketing a new TV show is based on a more integrated brief which questions the role of the brand, the purpose, and looks at how to make sure National Geographic leverages its social audience to drive conversation about its content, Cress said.

Another area of integration is tied to the opportunity to drive more personalisation and customisation with audiences, Cress said. Previously, customers were grouped based on being a magazine subscriber, a TV viewer, someone who’s taken a trip or bought a book.

“They’re sitting in silos at the moment, so it’s thinking about relationship acquisition as opposed to vertical acquisition,” she explained. “Then the role of editorial content, and using that as a tool to drive a more authentic discussion with consumers that brings them into a seamless ecosystem, is important.”

National Geographic has been using Adobe tools for several years to help bring these audiences together and improve its digital strategy. In particular, Cress noted Adobe’s mobile tool, which ensures a mobile-first approach to development.

“It’s about driving a more engaged, personalised strategy that wasn’t happening a year ago,” she said.

The wider strategic intention is to approach core themes and topics important to consumers and tackle them through a dialogue integrated across National Geographic’s multiple touch points.

“We have always been a brand that has stood with science and the facts,” Cress commented. “There is a tonne of science around climate and what’s happening. We’ve started a dialogue around that.”

A recent US example was an activation using social channels on Valentine’s Day, where consumers were asked to write a love letter to the planet. “We found our audience really starting to engage and what they wanted was to understand what they could do, and if there’s an active role for them to be part of the solution,” Cress said. “That’s led to a hashtag campaign, #myclimateaction.”

A priority for Cress is to delve deeper into the ‘why’, and understand what interests drive fans to engage through social channels. “It’s then about how we can create content that makes sense to the different communities that live in those platforms,” she said.

“It could be a hardcore exploration narrative and travel, versus those who want to embrace conversation around climate.”

The wider brand transformation program is helping bring together lines of business and especially editorial and marketing on bigger social themes, a further step forward to achieving consistency.

Alongside climate, another core topic is the exploration of gender and National Geographic’s print publication dedicated its January edition to the issue. At the same time, the multimedia team created a feature film featuring US journalist, Katie Couric, called the Gender Revolution.

“You see our two most powerful assets working in tandem around a big topic, which is human exploration,” Cress said. “You then saw a very focused effort in our social channels as the magazine launched to get that point of view out there, and start the conversation.

“By having a concentrated, integrated campaign through the magazine, and through what we put out in our owned and operated, social, we drove a much more integrated level of conversation.”

A more holistic approach to content across channels also ensures audience engagement can be sustained around longer-lead time projects, such as National Geographic’s Genius or Mars TV, Cress said.

“One of our most successful TV franchises through the years has been Explorer; it’s taken on different formats, but it’s all about what it means to be an explorer,” she said. “We have a series called Explorer but it’s also an evergreen, always-on content opportunity for us. We’re doing things like recruiting digital correspondents who can bring exploration stories to life in cities around the US and globally.

“It’s about creating a strategy that drives an ongoing, digital conversation around the role of exploration and our role in that.”

It’s a big cultural shift for National Geographic, which has formerly been so channel-led, Cress admitted. “You’d create a TV show and launch it. Now, we have a TV show, but also an ongoing ability to curate content and tell stories about the role of exploration digitally, as well as through things like crowdsourced content,” she said.

Up next: Gauging the customer mindset

Alongside work to better understand social audiences, National Geographic has embarked on a global segmentation project. Cress noted TV traditionally had demographic targeting in place, while the print magazine was a mix of demographic and psychographic.

“We’re rallying the entire organisation together to do a global segmentation where we’re building out more of a psychographic profile,” she said. “Our audience is very passionate, they want to be involved in active communities, they’re curious about the world around them, themselves and places.

“We’re inspired by human curiosity and understanding how we can create a more active role in our products for that audience. Understanding our fans certainly in social is feeding into that. The good news is we had a lot of data in place so we’ve aggregated that. By the fall, you’ll start to see this in market.”

National Geographic also launches a big brand campaign shortly. “You’ll start to see the positioning of that campaign and how we’re talking to our audiences, with more focus around that persona we’re developing,” she said.

There are significant hurdles to overcome, one of which is legacy technology across the organisation thanks to its channel silos. “Unfortunately, we have different CMS and email systems, so getting those things to talk is the biggest tech challenge we have,” Cress said.

On a brighter note, the intention across business owners to change has been really positive. “Everyone is embracing our common vision and opportunity,” she said. “Getting the technology right to then enable that is something we’re focused on.”

Really great brands have employees who live their values, Cress said, and in this respect, National Geographic staff are no exception.

“Our expression is further, and that’s a mindset that embraces curiosity and what’s possible,” Cress said. “We have put out a bold vision for where this brand is headed and what’s possible. The amount of enthusiasm across marketing, product and different lines of business demonstrates authenticity around figuring that out has been more positive and hands-on than I expected.

“We are driving a change agenda which is not always easy. But I’ve seen this internal explorer mindset, to take what’s possible for this brand and bring it to the world in a new way, so I’m optimistic.”