1-800-Flowers wants to transform its business with A.I. 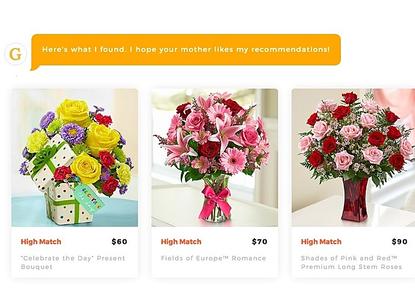 LAS VEGAS -- Executives at 1-800-Flowers.com expect a new wave in artificial intelligence technology will help to change their business so much it’ll be like running a brand new business.

“We are on the cusp of a change as big as when e-commerce hit,” said Chris McCann, president and CEO of 1-800-Flowers.com. “It’s giving us the opportunity to have such deep relationships with our customers that it’ll be like the company hasn’t existed before. It can change our market, our supply chain. Everything. It will drive change all through the company.”

That’s big talk from a businessman who knows about transformative change. After all, 1-800-Flowers.com already has transformed itself several times.

The company, a floral and gourmet food gift retailer with more than 4,000 employees, was founded in 1976 when McCann’s brother James started a flower shop. The business did well so he opened more.

In the mid-1980s, McCann was on board and got behind the idea of ordering products over the phone. He shrunk the business from 12 brick-and-mortar stores to three, focused on telephone sales and created the brand known so well today.

That was the first transformation.

In the 1990s, they began looking at online sales, creating a presence on AOL in 1994 and launching its first website on Netscape in 1995.

That was the second transformation.

“I used to say ‘90 to ‘97 was some of the most fun times of my career because it allowed me to experiment with lots of emerging technologies,” McCann told Computerworld in an interview at the IBM World of Watson conference here this week. “We’re not smart enough to predict what technologies will take hold, but we need to be there so when the consumer decides what they want, we’ll be ready.”

In the mid-2000s, the company jumped into social media and mobile technology, launching an ultimately unsuccessful store called Second Life, along with a successful Twitter presence, Facebook page and mobile app.

The ways in which 1-800-Flowers.com connects with customers, sells its products and promotes its brand continue to change.

“We foster a culture of innovation,” McCann said. “In 2008, we were having layoffs, but I said we are cutting costs in many different places but we also are investing in the future. One of those was investing in mobile. Not everybody agreed with me. It’s the future. We need to stay with it.”

The trends that McCann sees changing his business yet again are conversational commerce and big data, analytics and cognitive computing.

Conversational commerce is a fairly new term in which companies use artificial intelligence to interact with customers using voice commands, text and chat apps.

At IBM World of Watson, there’s a lot of discussion about conversational commerce, since companies like 1-800-Flowers.com and Staples, are talking about how IBM’s artificial intelligence system can help them make sense of an increasing flood of data, while answering customers’ questions, taking their orders and helping them feel more connected to their brand.

“Last January I was at a meeting sharing articles about A.I.,” said McCann. “I said it’s time to get in. We can’t wait any longer. In April, we launched our first commerce bot in Facebook Messenger. Then we launched on Amazon Echo.”

Then, going all in, they launched a beta version of an IBM Watson-powered digital gift concierge in early May.

The concierge -- named GWYN, for Gifts When You Need – takes customers’ questions and offers suggestions for products, from all the brands the company offers, that might meet their needs.

A customer, for example, might need a birthday gift for his dad, who is trying to keep on a healthy diet. GWYN might suggest a box of Harry & David gourmet pears.

For an Easter gift for your mother, GWYN might suggest several floral bouquets.

“The challenge we have had is how do we get consumers to know that we can solve more of their gifting needs than just flowers,” McCann said “When they have other gifting needs, they go somewhere else. GWYN helps the customer find what they need while looking across all of our offerings and brands.”

“GWYN positions us at the forefront of this new emerging world of technology that, in no question in my mind, will change consumer behavior,” added McCann. “In the early 90s, we saw the technology changing. We didn’t know where it would go but we wanted to be ready so we could learn and grow along with the consumer. We want to do that again.”

The company launched GWYN on its website in May in what was called a very early beta. A second beta, launched about three weeks ago, will run through the holiday season, providing information on how well the service works, what customers like about it and what changes they may need to make.

McCann said he expects an official version of GWYNN will launch in the first quarter of 2017. There are no plans for a GWYN app, but the company is considering it.

The company is focused on adding to the GWYN features it already has, enabling it to one day offer users reminders about birthdays and anniversaries.

McCann said the company considered other A.I. platforms but went with IBM Watson because it was “out in front” of competitors and had more capabilities.

“It allows the company’s culture to embrace creativity,” he said. “We have to make sure our supply chain is working but we have to step back and engage in projects like this to make sure the company goes forward.”