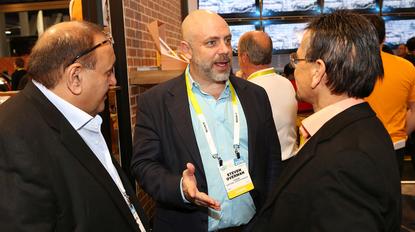 “If anyone had told me when I was bringing my cartons of Super 8 film to the college department head to be sent off for processing, that one day I’d be running that business – not only as the CMO, but also the film division and launching a Super 8 camera – I would have thought you were crazy,” says Kodak global CMO, Steven Overman.

But that’s exactly where he’s ended up. Two years in to his tenure as marketing leader and president of the consumer and film division for one of the world’s most recognised – and potentially most battered – brands, Overman has had plenty of time to reflect on what it takes to be a modern brand custodian.

Tasked with helping to bring the brand back from the brink, he’s instituted a series of changes from the inside out to rekindle staff pride in Kodak and help it become a beacon for commercial and consumer creativity once more.

Here, he shares the leadership and strategic marketing approach helping him to achieve success.

Overman actually didn’t start out as a marketer. In fact, his early aspiration was to be either an artist or priest.

“Both fields are examples of creativity and soul being applied to change people’s lives for the better,” he tells CMO. “Over the course of my career, I’ve come to realise business is a powerful means of doing that because businesses employ people. We spend most of our lives either working for organisations or acquiring from them. As a creative person, marketing was the logical way in.”

After graduating from the Rhode Island School of Design, Overman became a film director’s assistant on Philadelphia, then a multimedia artist. From there, he became one of the first employees at Wired magazine, producing the publication’s online video streaming news program.

An interest in the mobile industry saw Overman work for Nokia for many years, first as an agency partner, then client-side as Nokia’s VP and global head of brand strategy and marketing creation from 2010 to 2013. He also ran his own brand agency, Match & Candle, supporting startups and marketing service agencies with brand strategy development.

For Overman, the most important CMO attribute is curiosity. “We have to be agile and willing to learn,” he says.

“We are at the forefront of change – the toolbox at our disposal in terms of channels is changing all the time. That pace of change won’t slow down or stop. And in terms of data proliferation, we are going to have to decide what data is useful and what isn’t. That requires an ability to learn.”

It’s Overman’s belief in brands with purpose that led him to write a book, The Conscience Economy: How a Mass Movement for Good is Great for Business.

“It’s incumbent upon business to not only play an important role in the sustenance of a fair and justice society, but also continuation of a safe environment in which to live and thrive,” he says. “I’d sent an early manuscript to Jeff Clark, who I’d known for years and who’d just joined Kodak as CEO. Not only did he like what I was saying, he wanted me to come to Kodak and do it. So the book is a bit of a playbook of what we’re trying to do.

“Business can be a force for positive change, not only in local communities but in the hearts and minds of people everywhere. Given Kodak’s reach, fame, wisdom, mistakes it had made and incredible resilience not only to survive but thrive in the future, I jumped at it.”

Overman says the cultural transformation of Kodak is as important as the renewal of the brand externally.

“People at Kodak are incredibly resilient, but they had been traumatised,” he says of the staff culture he stepped into two years ago. “Going through Chapter 11 almost feels amoral. You suddenly can’t and don’t have to pay people you love and rely on. The majority of employees were there through that experience and there was a lot of latent shame associated with it.”

Another challenge was overcoming the distinct cultural identity across different geographies, which had come into the Kodak fold via a series of rapid acquisitions.

“What unified everybody was a hunger to thrive and prove they could change,” Overman says.

But cultural doesn’t change just because the CMO or CEO says it should, Overman points out. “Culture is what happens in the everyday – in the way we make decisions, communicate with each other,” he says.

A few concrete steps have helped foster an internal turnaround at Kodak. One was to distribute the executive leadership team globally, and Overman is based in London rather than New York, with colleagues in Singapore and San Francisco.

“It indicates the need to work better remotely and virtually, and how we need to apply learnings from different socio-cultural environments into the way we operate,” Overman says.

Overman also moved the marketing team into an open office space. “We took down the cubicles but left the carpet so you could see the ghosts of where the cubicles were to show what we’d done,” he explains. “Changing the physical orientation of how people work was huge.”

Even something as simple as allowing alcohol on Fridays has helped. “These decisions give people a sense of trying things in different ways,” Overman says.

Another strategic decision was to invest in product programs, such as the Super 8 hybrid device launched earlier this year, aimed at reigniting love for the Kodak brand.

“This is serving many purposes, not the least of which is rebuilding Kodak’s capability to manufacture consumer products, which is something that was phased out years ago,” he says. “We are in effect relearning things people used to have resource to do, and we’re re-instilling a consumer focus in the company.”

This was highlighted through Kodak’s stand at renowned printing industry exhibition, Drupa. The marketing team created an experience based around an inner city suburb being regenerated by artists, with street scapes, buildings, coffee shops and a grocery store created using Kodak technology.

“We filled the area with Kodak yellow, and we brought back the ‘K-bug’ Kodak logo, which had been wiped away by the prior administration looking to eradicate the past,” Overman says. “That was so uplifting for staff, to feel proud of classic Kodak again. That’s how you fight shame: With pride.”

Most of the brand renewal work is being done in-house, and Overman’s marketing team encompasses designers, art direction, digital operations, plus content development and production.

“We have folks who can work in wet labs, through to digital capability and we do all our Web work in-house, plus mobile apps,” he says. “We don’t have the privilege of being able to rely on agencies on a retainer basis, so we do that on as as-needed basis.”

In addition, as a matrixed organisation, Kodak has at least one marketer in each of the seven business divisions with dotted line reporting to Overman.

A focus on consumer observation, not just data

While Kodak has CRM systems covering commercial customers, Overman says the consumer insights emphasis has largely been qualitatively to date. One way Kodak is doing this is by releasing products, such as the Super 8 camera and smartphone, which reintroduce the Kodak brand to consumers.

“We’re gaining our insight by observation largely. We’re not doing a lot of consumer insights gathering at the moment, but that’s more a factor of limited resource,” Overman says, adding that a regular exercise for the team is to go “walkabout”. To do this, he’s overlaying an industrial design technique of empathic design and ethnographic research.

“The clues about what consumers desire and are going to desire are all around us. We need to make a habit of paying attention and not only taking time out of the office to observe, but also to capture, make sense of it, frame it and address it,” he says.

“Yes, we collect data via mobile apps, email marketing, CRM and that is useful for making particular business decisions. But let us not forget as marketers to just open our eyes and ears, engage in conversation and see what’s all around us.”

Gain the levers of business

“In a sense, it’s Kodak in a microcosm... This became my toolbox for creating a new growth engine for the company,” he says. “It’s a fantastic learning opportunity for any CMO to actually have the levers of business.

“My division is particularly brand driven because it contains some of Kodak’s legacy businesses, but it also holds the ingredients for the future, such as very complex material manufacturing.”

According to Overman, operating a large global complex business requires a marketing mindset, which he describes as a combination of “ingenuity, creativity, and an awareness of future trends”.

“Operating a significant revenue contributor to the company gives my contribution to the other businesses as a marketer even more strength,” he adds.

Another key attribute Overman believes CMOs need is fortitude. To do this, he suggests CMOs must build a series of strong business partnerships across the leadership team. Most importantly, the CMO needs to be very closely aligned with the CEO.

“As far as I’m concerned, the M in CMO stands for matchmaking; you’re matchmaking on behalf of the vision of the CEO,” he says.

Overman also says it’s vital to have a close working relationship with the CFO, and he considers Kodak’s financial chief one of his best professional colleagues.

“One of the greatest credibility builders is having the financial justification for a particular investment and the evidence of return on invested capital,” he says. “Some CMOs are intimidated by the CFO, but I’m fascinated with the language of finance; it’s as creative as marketing.”

The third crucial partnership is human resources. “The marketing function can, and at Kodak is, a role model of change, innovation, adaptability and learning,” Overman says.

“We’re the ones – I suspect it is true across my peer group – bringing in new technology, channels, communication modes, new ways of looking at data, back to the rest of the organisation. Since HR is often tasked with organisational development and effectiveness, that partnership can yield a lot of effective results too.”