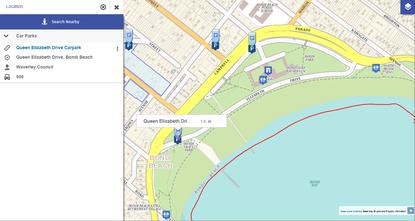 Waverley Council’s manager of esolutions, David Edwards, told CMO a restructure of the council about two years ago saw the culture of teams shift towards project-based activity. At the same time, new emphasis was placed on upgrading digital infrastructure and becoming a much more mobile-friendly organisation and services provider.

The esolutions team was formed and tasked with understanding and deploying digital technology that could create internal efficiencies and better services for the public.

Edwards pointed out 37 per cent of users are now accessing the council’s website via a mobile device, a 33 per cent increase over the past three years. These users were previously unable to view any interactive maps. The other motivator for investing in a new mapping solution was to give staff access to spatial information when they were in different locations and out in the field.

Having been a customer of Pitney Bowes, Waverley Council had been using the vendor’s MapInfo platform for the last 15 years.

“We started talking about how our rangers wanted to have iPads where they could access information about different licence owners and what they covered,” Edwards explained. “A food shop for example, has permits for outdoor tables, and they wanted to access that information in real time to be able to check details while out in the field.”

SSA allows staff to log in to mapping while on the beat, and unlike the council’s previous mapping platform, is all Web-based. Importantly, the platform also gave the council the opportunity to expand its interactive, public-facing online mapping service and make it both more user and mobile friendly.

Two types of maps are being offered to the public. One shows community facilities and is pitched at residents and visitors to the area. The other is a planning-based map, which has planning controls from the local environment and elemental control plan, and helps local property owners determine what developments can be done on their land. Information includes zoning classifications, bushfire prone and flood liable land, waste collection days and administrative details.

Edwards said his team spent a lot of time thinking about how to present information to the public in the most efficient way. One objective, for instance, was reducing the number of mouse clicks for users to access relevant information. The Pitney Bowes development team also worked on improving functionality and adding in iconography, allowing the council to present a clean, agile, mapping interface, he said.

“It’s easy for us to make changes on the fly and update in real time,” he continued.

The numbers are starting to illustrate the return on investment. Since going live with SSA in May, Waverley Council has seen a 37 per cent increase in users accessing the online maps to 1150 users on average per month.

Notably, Edwards said the council has had requests from the public to provide more layers online that it’s never had before, showing a new level of engagement.

“We’re also getting more internal requests from other how teams across the council can this service,” he said.

Edwards said the biggest number of customer service calls Waverley Council receives are around waste collection. While it’s early days, these have decreased by 2.5 per cent since the new mapping went live, another indication of its effectiveness.

There are plenty more layers to be added. One recent inclusion was public Wi-Fi hotspots, such as libraries and public beaches. “We had a lot of feedback from community just from being able to identify where these areas are,” Edwards said. “We didn’t previously have that ability to show them in a visual way.”

Another popular one is car parking, and all local car parks can be viewed using the platform. Users can find nearby parking options using a feature in SSA called ‘find my nearest’, which is integrated with GPS tracking on the user’s phone. Once a user selects a location, it then brings up Google directions.

Edwards said it’s now working to include mobility and motorcycling parking plus taxi ranks. There are also plans to add in bus routes and train connections, along with a map of the area’s stormwater network.

Edwards added his team is also working with rangers and waste enforcement teams to knuckle down internal priorities.