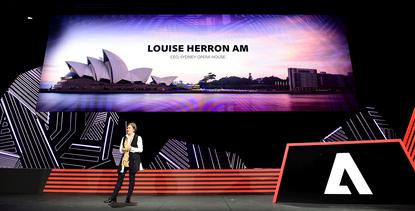 When it comes to digital transformation, it’s your teams and their imagination and creativity, not pure technology, that will make success possible, according to Sydney Opera House CEO, Louise Herron.

Speaking at this year’s Adobe Symposium in Sydney today, Herron described the ambitious 10-year transformation journey the iconic Sydney arts venue is on to modernise both its physical offering, as well as its digital one.

The plans kicked off following the venue’s 40th birthday celebrations in 2013. Thanks to donations from the NSW Government and partners, $300 million’s worth of renewal activity is now underway.

The Opera House became the first performing arts centre in the world to start rolling Adobe’s full Marketing Cloud suite after striking a two-year partnership with the vendor in March. The news came just shortly after the venue revealed its new fresh branding and identity, designed by Interbrand in collaboration with the father of circular font, Studio Laurenz Brunner.

Herron said a critical insight identified during the Opera House’s brand overhaul was that while consumers are familiar with the iconic sails and physical building, there isn’t as great an understanding of what goes on inside the venue. The team is now focused on “cracking open the force field” around the building and change perceptions of how the Opera House is experience, she said.

“But it’s not just about the physical building,” Herron said, adding that the physical and digital renewal now being embarked upon go hand-in-hand. “That’s why digital channels have never been so important. We need to tell one seamless story of inspiration and creativity across all channels.”

The first stage of the work sees the Opera House website overhauled. The site is being replatformed to Adobe Experience Manager and being produced in partnership with digital agency, Razorfish. Key priorities are making it easier for people to find out what’s going on at the venue, and creating content that is relevant and engaging, Herron said.

Five months into the digital transformation, Herron’s top lesson learnt from the experience is that people and culture matter.

“Of course you need to have the very best and latest tools, which we now have, but you also need a team with the right attitude, that’s willing to learn, problem solve, and that enjoys working at the edge of the possible,” she said. “The energy and commitment of our project team has been one of the most inspiring parts of the project so far.”

The Opera House has also started to embrace Agile ways of working, a practice that’s helping teams to take a decade-long ambition and series of significant, complex projects and break them into manageable, weekly tasks.

“This helps us break down projects into bite-sized pieces that can be tackled in weekly sprints,” Herron explained. “What was seen initially as scary and potentially unsustainable is now becoming the new normal.”

Herron’s third lesson was the importance of investing in staff training and change management.

“Unless you’re in a position where you can afford highly experienced experts, which we as a struggling performing arts company can’t do, then training is going ot be one of the biggest factors in your success,” she said. “It also brings people together, and that’s the most important aspect of success.”

Her last piece of advice was to have fun and foresight. “You don’t foten get a chance to pioneer. Digitla transformation is the most complex technology project we have ever embarked on. But so far it has been as liberating as it has been daunting. What we get will only be as good as our planning and imagination,” she said.