IBM CEO: Cognition is the next big business disruptor

IBM chief is joined by Myer CEO and NAB CEO to debate the role of machine learning and cognitive systems in business, innovation and customer experience 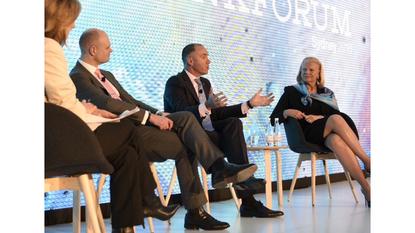 In just five years, every important decision made by businesses will be aided by cognitive systems that understand, learn and augment our decision making, according to IBM’s chairman and CEO, Ginni Rometty.

Speaking at the vendor’s Thinkforum in Sydney on Tuesday, Rometty proclaimed the world is on the cusp of the next disruptive wave of technology driven by cognitive platforms that can take massive stores of data within an organisation and turn it into competitive advantage.

“Regardless of role, every industry will be disrupted,” she told attendees.

“Every industry has its Uber or Tesla, and many people say they are going to be a technology company of some kind. An important question is: When everyone is digital, who wins?

“Digital for all has to be the foundation, but it’s not the destination. There’s one thing that’s more transformative that’s in front of you now, and that’s the era of cognition.”

Rometty pointed to three key trends ushering in the next wave of disruption. The first is the rise of big data, much of which is being stored but not yet visible in the things organisations do.

The second game-changer is the advent of cognitive systems, or natural language-based platforms with domain knowledge that can understand, reason and learn, Rometty said. IBM’s Watson is the star player in this picture, and Rometty noted the platform now does 35 things, is supported by 80 technologies, works in eight languages and is gaining a role in a variety of industries stretching from health and finance to student advisory services and even marketing.

In May, IBM also announced plans to embed its Watson platform into its marketing and commerce offerings through a real-time personalisation engine, which employs machine learning to learn, advise and suggest the right offer and message that should be shared with digital customers.

The third is the rise of cloud computing and in particular, the ability to swiftly program and connect systems through APIs, Rometty said.

“If it’s digital today, it will be cognitive tomorrow; this is an era that will go for decades,” she said. “Without it, we’ve no chance of keeping up with this tsunami data has created.”

Rometty positioned several key ways cognitive systems could be utilised within an organisation, ranging from deeper engagement to scaling expertise, improving operations and processes and discovery.

As an example of cognitive as a product or service, she pointed to Hilton’s trial of the ‘Connie’ robot, powered by IBM technology, to perform concierge services in hotels.

To coincide with the Thinkforum, IBM Research also announced a partnership with the Melanoma Institute Australia to employ cognitive technology to better detect and track skin cancers. The research builds on the vendor’s existing agreement with Molemap, which uses advanced visual analytics to analyse more than 40,000 data sets including images and text.

But just like digital before it, successful adoption of cognitive within organisations is going to come down to purpose, company culture and an ability to embrace disruption, said Myer CEO, Richard Umber, and NAB CEO, Andrew Thorburn, who joined Rometty on stage.

Thorburn saw cognitive playing a strong role in helping the banking group get smarter, faster and better at building more tailored and personalised experiences for its customers.

“Banking has always been a people and client business, and today there are different demands and opportunities, but we’ve got to get back to people – it’s why we exist beyond profit,” he said. “We’ve got to get the basics right. Often, we’re not getting that right. That’s the basics of process, simplicity of products and the capability and knowledge of our people and we have a long way to go to get that right.”

As an example of how IBM is using cognitive to do just that, Rometty said the vendor had trained Watson to assist with its tech support area, reducing the time it solves problems by 60 per cent.

But all three leaders agreed change management and culture will be pivotal to the effectiveness of these systems and how they’re utilised. Umbers described the ultimate combination driving transformation as capability, culture, good systems and processes.

"With innovation, we need to structure appropriately - it's all about the execution," he said, noting that Myer is working on things such as cross-functional team collaboration to help drive more innovative thinking as well as adopting startup language.

“There is a great phrase: Topdown innovation is well structured but useless, bottom up innovation is brilliant but chaotic. Success means you have to find a structure and process that sits somewhere in the middle of the mix...all revolutions are grassroots drive. As leaders we have to harness that, then direct that in a cohesive way to get alignment.”

For Thorburn, that comes back to purpose. “The ‘why’ we are doing everything we are doing needs to be clear, compelling and motivating,” he said. “That must come back to clients and customers.

"Also, staff must believe their leaders believe it – culture really comes back to the behaviour of leaders. People follow what leaders do, not what they say.”

In addition, change must be supported through the way people are measured, paid and rewarded, Thorburn said. “Then we need the project methodology, strategy and to start things that allow us to go much quicker as a complex organisation.”

To help staff better understand the impact cognitive can have on their roles and the business, Rometty said IBM had launched a competition, Cognitive Build, that gave all staff the tools and Watson capabilities to experiment around three areas: Changing the world, changing processes or doing something great for clients. The program of activity saw 300,000 of the vendor’s 400,000 staff engage and helped employees to understand cognitive “viscerally”, she said.

“The majority of this is culture. We talk about speed, but if you just insist people go faster, faster, faster, they'll just try to do the same things faster. It’s about having a culture that is agile to drive new ways of working,” she added. “If you connect to purpose, then you rearchitect for change.”