Non-conventional teams, digital and predictive insights are just some of the ways this marketing and customer engagement leader is addressing the question of customer centricity 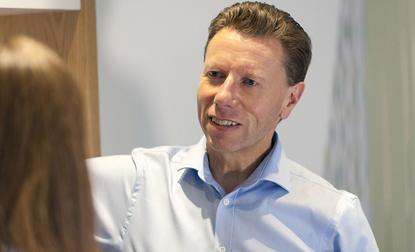 It’s a journey many marketers will be familiar with, if not already on: How to turn a product-centric, sales-led organisation into one that’s customer-centric and engagement driven.

Ingledew was appointed Standard Life’s first executive-level marketing leader four years ago. The UK-based firm focuses on the long-term wealth and investment plans of its 4 million customers and operates a retail business in the UK and Europe. It’s the largest provider of workplace pension schemes in the UK (similar to Australia’s superannuation industry), with products and services largely sold through financial advisers.

Having built his career in marketing and customer engagement, Ingledew was given the job of helping Standard Life become customer driven.

“We were bringing in vast numbers of new customers, but they were falling out the bottom of the bucket,” he told CMO in an interview at the IBM Amplify conference. “No one was really noticing, and many of them were high-value customers. Acquisition is expensive and if you’re then losing existing customers, you’re losing money. That was the business case.”

Key to making sustainable change was first understanding who the customer actually was. “The customer when I first arrived was seen as the adviser, but really the customer is the person who’s money it is, it’s their life savings. We needed to focus on them,” Ingledew said.

“When I took over, I also said I’d take responsibility for digital, which sat in another part of the business. Then I took on data, as no one was taking responsibility for that, plus insight. And as we had no customer experience area, I established it. I also took complaints out of operations, became our lead on innovation and analytics and created marketing to be much more important in customer journey mapping.”

It was a big shift for the organisation, and Ingledew admitted not everyone was ready for it. Strong support from the group CEO, along with several new non-executives who brought a retail mindset to Standard Life, helped pave the way.

“I was then able to create a whole new unit, and over time we’ve been on the journey. But that’s when the hard work starts,” he said. “What we’re going through is cultural change, embedding habits and new processes, thinking of the end customer not the adviser, and it’s very bumpy – it’s not a straight line. I’ve had to do things in a non-conventional way.”

One non-conventional example Ingledew points to is how he approaches programs of work. Rather than creating traditional projects, he has set up cross-functional teams that not only manage new work but also execute off the back of them.

The first group, nicknamed ‘team funky’, was tasked with looking at why customers were leaving the financial firm. The co-located team consisted of marketers, IT, product, operations and risk.

“What we discovered was that it wasn’t to do with our products, they just didn’t think Standard Life cared enough about them,” Ingledew said. “They didn’t hear from us, and we weren’t talking to them. So it became how we start to converse with them as human beings, rather than just as investors or policy holders.”

Team funky’s mission was to tackle this perception head-on and improve customer experience using digital mechanisms. At the same time, Ingledew asked the team to change their experience as employees by adjusting the way they worked, embracing agile and collaboration as foundation capabilities.

“I often use the term marriage for this, because people think collaborating is having a meeting and being nice,” Ingledew said. “Marriage is about living with someone. The really important thing is that you get to know each other and start to respect diversity. We were not a very diverse organisation, and I wanted people to respect skills as well as diversity from a gender point of view, age and ethnicity. I also brought in new people over time.”

Team funky now has grown to 200 staff and is front and centre in Standard Life’s engagement efforts, employing a range of digital channels to do so including the main customer website, personal customer dashboards, mobile , social media and customer communities.

Another team established by Ingledew 12 months ago focuses around data and analytics.

“We had lots of data that wasn’t being used, and it wasn’t helping in terms of customer insights,” he explained. “This cross-functional team of different disciplines were given an objective and mission to start thinking about how we used data and build an analytics capability.”

To help, Ingledew brought in additional data science skills, and started working with a number of different partners. One of these is IBM, and Standard Life is tapping the vendor for predictive analytics and customisation and invested in its Campaign, Interact and Marketing Cloud digital marketing products. These are being used to track customer interactions across screens, devices and in-person in order to create unique customer snapshots and audience profiles.

The company is also working with performance marketing agency, Merkle.

As an example of data in action, Ingledew pointed to work understanding customers and their attitude towards long-term investment when they approach the age of 55. New rules introduced in April 2015 had also opened up a risk that people would move their investments to alternative providers, prompting a rethink on engagement.

“Our focus was getting a real understanding of those customers so we could start to predict those that have a propensity to leave,” Ingledew explained. “That was where we could demonstrate hard facts based on our communications.

“In some cases, we found that we were overcommunicating with them – eight or nine communications over six months would turn them off and they’d have a higher attrition rate. It also wasn’t as personalised, which is something we’re moving towards.”

As a result of utilising data, Standard Life has been able to improve loyalty, reduce churn and has since seen customers bring more money from other places into their Standard life accounts.

“Now we’re taking that type of approach into other areas,” Ingledew said. “It’s doing things in bite-sized chunks. That’s the big lesson – don’t try to boil the ocean. Go back to specific results, highlight those to show the value, and build the confidence and trust of the CFO. You do need a vision about where you’re taking things, then prioritise.

“The fuel for marketing is data, but it’s how you change the way of working and the storytelling that’s vital.”

Winning the CTO over

Transformation is also about encouraging cross-functional working. While he was against formal processes initially, Ingledew said a pivotal relationship he needed to build was with his CTO.

“Just over three years ago, I told the CTO that we needed to get married,” he said. “It was a bit difficult initially, but we both had a common bond in that we grew up with punk rock music and we were both there for The Clash, so we had an affinity anyway. But we were very different animals.

“I told him we could turn the business into one that’s customer driven, but marketing and technology need to come together. You can’t do technology if it can’t be used in marketing, and I can’t do marketing without technology. He bought into that. We didn’t overpublicise that initially, we just went ahead and did it, talked to our teams and showing examples.”

“But it can’t just be the marketing people seeing and hearing customers,” he said. “When the technologists went out there and did that, it helped them better design architectures, and understand why certain things needed to be prioritised in certain ways.

“I use this phrase ‘marketing is far too important to just be left to marketers’, and that’s because I believe marketing is the whole organisation, including IT and HR. Everyone has to have a mindset of thinking about the purpose of the business.”

Ingledew is the first to admit he doesn’t recognise walls between marketing and other functions, and that his work has often been disruptive.

“I don’t necessarily seek permission, I seek forgiveness. If I need that finance or risk person, I just ask them to work with us,” he said.

Helping people to understand how to work in a matrix organisation has helped. “While you have functional subject matter or expertise, that is separate to the overall and combined objective, which is digital engagement with customers or growing particular groups of customers,” Ingledew said. “That gives you a common bond and helps to break through the silos.”

Another important relationship for Ingledew has been with HR, and he agreed there’s a need for CMOs and HR to work more collaboratively in organisations today.

“Marketing has better use of data, communication, is more conversational, has experienced a change in skillsets, ways of working and measurement, so why shouldn’t that be applied to people too? If you want to have a great customer experience, you have to change the employee experience.”

At the same time, Ingledew recognises the skillset for marketing has changed dramatically, and he saw the marketer of the future as part scientist, part artist. To foster this new skills base organically, he’s recruiting more recent school graduates, and has set up a marketing apprenticeship program, one of the first in the UK.

Using technology to automate traditional marketing activities is another must. “Technology is not the master, it’s the servant. As you free up people, you need to use that time for human creativity,” Ingledew said.

At Standard Life, this free time led to the launch of an internal startup, called 56 Degrees, which provides bespoke content and creative services to external organisations.

“I could have reduced the headcount and taken costs out, but these are very creative people and large employers like Deloitte and BT were asking if we could offer a more bespoke creative service in terms of communication,” Ingledew said. “They were prepared to pay us a fee for that. I’ve got the people and the time, so we set up the startup business.

“I’ve monetised marketing, and technology enabled that. It’s not big in terms of revenue, but the benefit is it’s showing commercial value of marketing.”