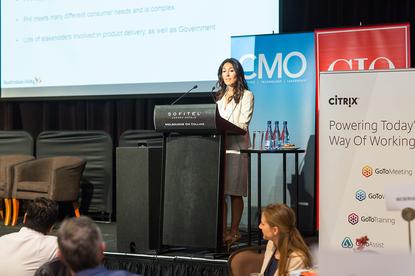 Confusion and less-than-consumer-friendly products in the health insurance that are hard to differentiate was one. Technology advancement and being at the forefront of harnessing digital change was another. Delivering sustainable growth to the business also required more than just existing thinking about products and services.

“I’m passionate about delivering improved business performance and making us more customer centric. Innovation is a core part of this,” she told attendees at the recent CMO, CIO and ADMA Executive Connections event in Melbourne.

“Delivering sustainable growth, my core business objective, couldn’t be achieved with just business-as-usual optimisation. We needed something more formal and we needed to introduce new techniques and a new way of thinking into the organisation.”

1. Get the business on side for formal innovation

The first step was eliciting broader participation across the business for the formal innovation agenda.

“It wasn’t enough for me and my team leaders, as advocates of the consumer internally, to charge off on our mission, we needed to engage the business,” Vogel said. “We did that by recruiting innovation champions from all functions, and training them on the repeatable process and the framework so you get that broad depth of thinking, but also the buy-in from people in different areas.

“People can do think tanks and different ideas, but unless you have a formal way to prioritise and manage these ideas, and the execution of them, they can just sit in a big place, gain momentum for a while but are then forgotten about.

“What we have done is create a pipeline, which is when you have a whole stack of things, some incremental, some disruptive. The way you stay ahead of the competition is by having this pipeline of at least 12-18 months’ worth of initiatives you can continue to roll out.”

2. Make it about the customer

For Vogel, innovation has to start with the customer.

“If you don’t understand that customer, you’re just being creative for the sake of being creative,” she claimed. “You need to understand the pain points and again, it doesn’t have to be a massive, disruptive idea, it can be an operational process set up to help the organisation versus customer centric.”

As an example, Vogel pointed to Australian Unity’s claims process, which had been cobbled together and put the customer last, rather than first. This is one such area requiring innovation, she said.

While agreeing innovation starts with strategic mission, tied to strategy and what needs to be achieved in terms of objectives and KRAs, it’s then important to go out and scan customers, Vogel continued.

“You must get out of the building – what you end up finding is you’ll have a whole group of people in a room that are like-minded, and similar in terms of age, demographic and life stage, and they all end up nodding,” Vogel said. “You’ll think you’ve collaborated but it’s not how the process needs to work.”

To better garner those end-consumer views, Vogel said the organisation regularly taps university students, as well as uses an innovation consultancy to bring in external people relevant to its product ideation phase. This could include a healthcare professional with specific understanding and expertise around a priority area.

“But it’s equally fantastic to bring someone random in and get the average consumer,” she said.

3. Ideate but then decide

Once the customer’s pain points are established from their point of view, it’s about bringing together innovation champions as well as external people to ideate, Vogel said.

“That’s the part where you spark, and come up with all ideas – no idea is a bad idea,” she said. “But then you need a decision lab when you come together and normally it’s the key sponsor who understands the mission and is responsible, sits with a group of people and you prioritise those ideas.”

From there, Australian Unity develops experiments using the lean startup process in a fast learning loop.

“The key is testing things quickly, in a very lean way, and to ideate quickly with those consumers on what you’ve built to see if it’s what they want,” Vogel said. “That gives you the guidance on whether you proceed.”

4. Accept failure is about learning

“If you adopt this [lean] methodology, you fail fast and then it’s about learning: You iterate, pivot, change what you’re doing and move on to the next thing,” Vogel said. “Failure is then necessary to keep evolving your idea.”

Linked to failure and iteration is the learning that you can’t be in love with your own idea, Vogel said.

“You have to separate your own intuition that you rely on in senior management, and let it be up to the customer,” she said.

As part of its program, Australian Unity has insisted innovation champions give up 20 per cent of their time to spend on innovation. Champions are also trained and given tools and guidance, but Vogel admitted getting that time has been a big challenge.

“For all of our innovation champions, we’ve built into their KPIs innovation metrics, and that’s not around delivering revenue, but getting three or four ideas to experiment phase, for example,” she explained. “It’s up to the customer whether something will be well received or not, so participating in the process and getting things to experiment phase is key. We have an innovation budget and within that have money to do experiments.”

Australian Unity has also hired an innovation manager, who first conducted a roadshow internally promoting innovation, and has regularly stood up alongside Vogel on staff update days to encourage people to buy into the innovation framework.

“There have been some issues – some people thought they wanted to do it but didn’t - but the ones that do are just enjoying it. We also had to speak to their managers to find out what they could stop doing in order to free up time for something else. So it’s management, plus the innovation champion themselves wanting to be part of that.”

As symbolic recognition of this, Vogel said Australian Unity held its own ‘zombie week’ during Halloween to look at what people could kill off in their day in order to free up time for innovation.

“My team said the board report was a waste of time, so we looked at how to change that, make it different,” she said. “It’s about being authentic and putting your money where your mouth is. We then keep doing recruitment drives every six months.”