How to harness digital-led innovation

Innovation leaders from ABC, Mastercard, Vision Critical and Collabosaurus discuss the impact of digital disruption and how they're working to innovate from within using customers as their guide 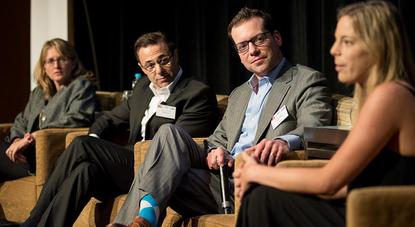 Innovation is happening across every organisation, continuously. But it’s the ability to harness and scale those ideas, as well as disrupt traditional power hierarchies and corporate structures, that will make or break how established organisations compete in a digitised, customer-centric world.

Speaking at the March CMO, CIO and ADMA Executive Connections event in Sydney, panellists from ABC, Mastercard, Vision Critical and startup, Collabosaurus, discussed how they are fostering innovation within their organisations, as well as the challenges they face disrupting existing business models.

ABC’s director, digital network, Angela Clark, was initially appointed to run the broadcaster’s innovation division three years ago. The separate unit was amalgamated into the digital network division formed last year, which has a remit including R&D and innovation, as well as all audience-facing technology, architecture and the roadmap for ABC’s digital products.

One of her initial challenges was the perceptions of an innovation division across the rest of the business.

“Innovation was almost like an insult to the creativity of others,” Clark said. “In a creative, content-led business, content makers across the ABC are very innovative and that word is used to define something inbetween what they do every day, and creativity.”

“Our R&D team, which is the same team doing innovation work, is now looking at a five-year horizon, and they’re working on development of skills to that timeframe,” she said. “They’re doing a lot of labs across the organisation, virtual reality and the connected home - we’re currently doing a co-lab and living rooms of the future.”

“For a lot of people particularly with large digital products like us, where we have product millions of people using our services everyday, is that there is a tendency… just to increment. So we’re trying to innovate and do things that are 10 times better, not just 10 per cent,” she said.

“We’re working on a whole-of-ABC approach. For example, we’ve done a large piece of human designed research over the past six months creating a unified, seamless experience across multiple touchpoints across all our digital products. So to innovate and create something different to what exists now, in terms of our customer experience across all products – that’s what we defined as innovation.”

Mastercard senior business leader, market development and innovation, Gary Duursma, is responsible for the acceptance side of the payment company’s A/NZ business, which encompasses terminals and increasingly, online capabilities.

“A lot of competition and change you see in the payments industry is happening on that acceptance side – mobile wallet technology, digital payments - and it’s my and my team’s responsibility to innovate around that,” he told attendees.

“In the payments industry, we are witnessing a heap of new entrants who have no interest in traditional revenue streams. People now aspiring to the payments industry, such as Apple, Google and the digital giants, are interested in the data that flows with the payment. They want to know what you bought, when you bought it, where, what the weather was when you bought it, and what other factors were involved around that purchase. They’re interested in the before and after bit of a payment, more than the payment itself. That’s causing us to innovate.”

While innovation and pure experimentation are great ways of innovating, the reality is most organisations need to find ways to instil innovation and customer centricity into everything they do, all of the time.

“As a result, innovation might be 10 per cent better or it’s 10 times better,” Douglas said.

For Clark, the other consideration is how innovation relates to digital disruption, something most organisations are still grappling with.

The more successful and large the company is, the harder it is to accept that disruption is going to substantially affect it, Clark claimed.

“Therefore the size of the bet they make in innovation isn’t large enough to replace the level of disruption enterprise-wide they’re facing,” she said. As a result, innovation becomes a cultural challenge, Clark said.

On the flip side, the potential of scale if you get it right is enormous, Douglas said.

“We talk about first-mover advantage, but really it’s first-scale advantage. And a large enterprise has the opportunity, if they get that innovation right, to get to that scale faster,” he said.

At Mastercard, innovation is happening at two levels, Duursma said, and therefore needs a corporate-wide focus. To do this, the company has created a digital enterprise to help migrate away from its focus on a plastic, physical card, to a string of digits that creates those payments, he said.

Most importantly, innovation requires people to be taken away from their day job, Duursma said.

“The day job is the enemy of innovation,” he said. “Within our organisation, we’ve done a few things to try and create that.”

One of these is ‘idea box’, where a group of two or more employees can get together, apply for an idea box, which includes a giftcard for $1000, and are then encouraged to come up with a disruptive innovation that’s relevant to the business in a certain timeframe. The process goes through several rounds of funding and has helped create new business units within the Mastercard group globally.

An example Duursma noted was “simplified commerce”, which is now two years old and live in 16 markets as a new entity and business line.

“There are other things we do too, but the key is dragging people out of their day job and encourage them into places where they feel empowered and brave enough to expose the ideas they’ve got,” he said.

Douglas agreed getting people to be innovative when they don’t perceive it to be their job is part of the cultural challenge.

“We’re so much more empowered than ever before though mobile, social, and our ability to shout louder than ever, so the products and services we offer the world won’t be our unique competitive advantage in coming years, it will be the experience,” he said.

“To wrap your head around that as an established business means you have to really engage people to understand the experience. It becomes emotional, not necessary the literal experience of using the product. That mindset shift and putting the customer at the centre of that, is ultimately the differentiator of the future.”

Collaboration across the business is a key component to getting innovation off the ground, panellists agreed. Collabosaurus is a startup that partners and collaborates with brands in order to share and cross-promote each other’s assets.

“It’s exciting to be in a startup as we can move very quickly and fail fast,” its founder, Jessica Ruhfus, said. “Because the team is so small, everyone has a strong awareness of every department and no one will ever say that’s not my job, because we’re working to one common goal.”

The way Collabosaurus gets innovation going and generate new ideas is looking at ways to “self-destruct”, Ruhfus said.

“We sit down every month or so and say if someone was going to come in and smoke us out, who would it be and why, what would they be doing differently,” she explained. “The opportunity to stay ahead of the game is really just about fostering that innovation and getting ideas going. Innovation happens everywhere, all the time, and it’s the implementation of those ideas that’s counts.”

Panellists also debated whether customer insight and knowledge came first, or innovation. Clark pointed out it’s no good just factoring in your existing customer, or their current needs, you have to try and anticipate their needs and desires in the future.

“We’re not just developing for behaviours present now, but anticipating what behaviours are in three years’ time,” she said. “We have a north star, and that requires innovation. You start with the audience insight, and that customer as your horizon, but because we can’t future proof and are trying to be future friendly, you can’t just base development on what you know now. I think you need to innovate to stay with that audience/customer.”

The challenge of putting the customer first is it takes a lot of power away from traditional hierarchies, Clark claimed.

“In industrial, large-scale organisations, power hierarchies are established and based on specialisation. People have risen to the top based on their knowledge and skill, at making the right kind of decisions,” she pointed out. “This is saying put the customer first, and that in turn puts it down to the people who best know the customer and ultimately, the customer.

“I think it’s empowering, but many don’t feel that way, as they feel they’ve spent 20 years getting to the top. It’s incredibly internally disruptive.”

To do it, an organisation requires a clear, shared vision of where it’s headed, Clark said.

“The data often comes into overall business goals and objectives, but you can’t make decisions on being customer focused using decisions every three or six months, you have to make them daily,” she added.

“You can’t execute across a customer focused ambition, and have the traditional decision making structure. That’s the difficulty a number of us are in, with trying to lead customer-driven decision making in organisations that aren’t structured to do that.”