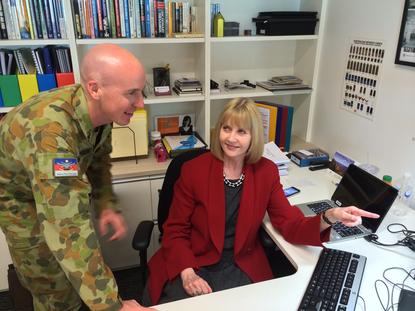 It takes more than leadership skills to run a successful marketing team, according to Defence Force Recruiting’s general manager for marketing, Pat Duffy. Marketers also require a healthy dose of honesty and humility.

“I’ve been very lucky in my career, but it’s also important to remember you have to be brave enough to admit what you don’t know and plug the gaps,” she told CMO.

Duffy has been in her post at Defence Force Recruiting for the past eight years and has seen the marketing function undergo significant change over this time.

“We talk about marketing, but at Defence Force Recruiting we’re no longer traditional marketers,” she explained. “We don’t have a product to manage and we don’t have distribution channels. But what we can do is inform people as to why joining is a good thing to do.”

When Duffy first joined in 2007, she found the Australian Defence Force's advertising approach was based more around methods of entry. While there was some service branding, the focus was more about joining the ADF and becoming a pilot, or gaining a technical trade.

“I came in on the tail end of that and it wasn’t unsuccessful, but it wasn’t as successful as what we decided to move to, which was a single service focus,” she said. “I think we’ve also developed very strong brand platforms, especially considering the misperceptions about the services and the lack of knowledge about ADF careers and the recruitment process itself.”

Duffy’s 30-year marketing career spans across multiple industries and companies, but a common thread has been her ability to tackle significant brand development and transformation.

She began her career at IBM before moving into sales, product management and marketing.

“I had the great good fortune early on to work for a great IT entrepreneur and Australian legend, Lionel Singer,” she said. “He was the first person to give me the exciting opportunity to manage a big marketing portfolio and I became the director of marketing for the B2B group.”

“When I worked at Optus at such a large-scale consumer level, I felt as though I had found what I was meant to do,” she said. “At the time, Telecom was the only major player and this was a massive opportunity, as we were rolling out a fresh network and building up a brand. But Optus was really political as the push for competition became more intense, and I was eventually headhunted into Telstra.”

Duffy said working as a director for corporate marketing and then director of communications at Telstra is one of her biggest career highlights.

“We were spending the best part of $300 million in those days on marketing and communications,” she said. “My challenge was to pull it all together and cut the costs out. I said I could probably take $100 million out and nobody would notice.”

With a team of more than 100, Duffy said the telco underwent significant change as it strived to transform its brand positioning.

“We went from being the brand that people barely tolerated, kind of like the fat uncle in the corner at a family do, to a brand that people really liked and connected with,” she said. “I feel proud of this achievement to this day and I think we left a legacy that really helped Telstra go through some pretty tough times.”

One key step Duffy took was to restructure the entire marketing matrix.

“I had functional groups, like advertising, and direct marketing, sponsorship and events,” she said. “But I also had a customer focus side. I discovered that most people were not comfortable working in a matrix. In fact, you need to be confident to have quite a bit of ambiguity around you. I relished the fact that I had a big enough team to try something different.”

There was also a roster of agencies working with Telstra, which Duffy said were competing with each other.

“We decided we weren’t going to do this anymore and created a top level agency, which was unprecedented at the time,” she said. “This meant we forced all the agencies to work together and have a single brand voice.”

Following various marketing roles in the financial services and a business development role at STW Communications, Duffy moved to Canberra and took on the position at Defence Force Recruiting.

For Duffy, the challenge at Defence Force Recruiting was shifting from the traditional influence marketing, to a more inspire and educate focus.

“Ultimately, I believe a marketer’s job is to influence people, but at the ADF, the focus is on inspiring people to join the Navy or the Airforce, showcasing the skills they can gain and the opportunities ahead, as well as of course serving the nation,” she explained.

In order to help raise awareness and boost engagement with the next generation of prospective recruits, Duffy has been instrumental in Defence Force Recruiting opening its social media channels for the first time.

“We decided to engage in a social media strategy, which is challenging considering we are in a very risk-averse organisation that is obviously very security conscious - where we don’t even store anything on the cloud,” she added. “This was a big break for us.”

Duffy now has a small group managing the Defence Force Recruiting social media, along with a Facebook page dedicated to job alerts that has more than 300,000 fans. Through a slow and steady build of Facebook followers and engagement, the page is also a platform through which the Defence Force promotes its key recruiting informational sessions.

“We used to advertise these very traditionally and spend up to $15,000 trying to promote an event that perhaps only 60 people would turn up to,” she said. “We now advertise information sessions exclusively on Facebook, which is very exciting, as it is a low-cost way of inspiring people to come in and educate them. And it has just exploded. Attendance sessions are getting bigger and bigger.”

Defence Force Recruiting also runs live Q&As on Facebook, with ADF professionals who give insights into their careers. Duffy claimed these can have over 1000 registrations.

“We have our experts answering questions days after the event is over because of the volume of backlog of interest,” she said.

Despite the boost in engagement, maintaining the social platforms are not without inherent risks. Duffy said she always reminds her team to remember the environment in which they’re working in, and the risk of doing anything wrong could quickly amount to shutting down of the whole page.

“If it wasn't for social, we would have to submit Q&As through Defence headquarters, which would not be as immediate,” she pointed out. “But the team does a great job, they never stray into controversy, they know when to close a conversation down and in a conversational manner, point people into the right direction like the website to get more information.”

One challenge Duffy continually battles is the need to generate very engaging social content quickly to carry a message.

“That’s an ongoing challenge and we’re working with a creative agency to move that forward,” she said. “We think we’re getting better and better, like providing virtual tours of the Defence Force Academy, or posting little animations of different aircrafts and helicopters to engage and attract attention.”

Conversion is a long-term process, Duffy noted, and an individual may show initial interest but take years to decide to join.

“It’s difficult to make a linear connection between investing a quantifiable amount in advertising and marketing and the end result,” she said. “But what we do know is that those who we connect with on social media have a much shorter conversion path.”