The chief marketing and editorial officer for the property and real estate media company shares how content is enabling her acquisition strategy, as well as her strong ties with product and technology 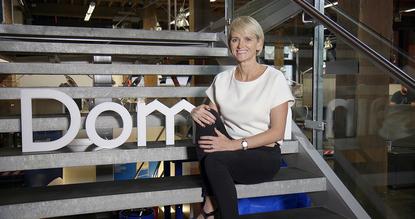 Two things ring true for Domain’s chief editorial and marketing officer, Melina Cruickshank, when it comes to being a modern marketing leader. The first is the capacity to work closely with product and technology functions.

“They are moving so quickly, you need to stick close to ensure you’re getting your messages out to consumers well enough,” she tells CMO.

The second is an ability to communicate with and inspire your team. “Because things are moving so fast, you need to bring them with you and make them believe,” Cruickshank says.

It’s this people-led approach, along with a healthy dose of data-driven decision making, editorial content, audience-oriented marketing and mobile-first thinking that Cruickshank is employing at the property media group.

Domain Group is one of five distinct divisions created by Fairfax in April 2013 as part of a restructure that also saw traditional print mastheads and their digital counterparts grouped under an Australian Publishing Media unit.

Since joining the team 18 months ago, Cruickshank has built a new division of 55 staff from scratch, pooling together journalists with audience marketers into a single content and audience team.

The results show the repositioning and content approach is paying off, with monthly unique audience figures up by 92 per cent in 18 months, audience growth of between 167 and 180 per cent in key competitive markets, and a much stronger position as Australia’s second-largest property group against REA Group.

Cruickshank’s background has a distinct digital and publishing bent. She has been with Fairfax since 2005, launching affiliate brands such as Essential Baby, Traveller and Daily Life and growing their audiences to about 1 million unique visitors per month. Prior to that, she built up a career in product marketing and digital publishing, working in the UK for digital agency, View Strategic, as well as an ecommerce startup, and counts an environmental coordinator role with Rio Tinto as her first professional role.

Cruickshank says she pitched Domain Group CEO, Antony Catalano, her vision of what needed to be done in order to grow Domain’s audience and become a successful challenger brand.

“We needed to bring together the journalists and audience marketers, create a new division called content and audience, and just go for it,” she says. “It was a huge risk, and completely different to what everyone else had been doing. But I told him it was all about our journalists and our content. Domain’s strengths are mobile and editorial.

“People are obsessed with property, and if we can communicate to them in an authentic manner about property and gain their trust, we’re going to grow our reach.”

Cruickshank’s team includes a handful of property journalists from The Sydney Morning Herald and The Age newspapers.

“They are really progressive journalists who understand our audience,” she comments. “Then we have our audience marketing team, separated into performance, social and traditional above-the-line channels.”

Another step Cruickshank took was to streamline Domain’s agency list, reducing numbers to five. These include a media buying agency (Vizeum), PR (Sling and Stone), and with direct relationships with Facebook and Google, Domain’s big channel partners. “We then we moved our investment into media spend,” she says.

Prior to the restructure, Domain’s market approach was highly sporadic, Cruickshank admits.

“Fairfax has made some mistakes with Domain and been open about it, where they’ve centralised then decentralised. Splitting it out has allowed for complete and utter focus,” she claims. “We work closely with Fairfax when we need to, but essentially it’s my calls, my budgets.”

The ultimate ambition for Domain is to bring competition to the marketplace, Cruickshank continues.

“That’s all our agent customers wanted too. They faced a monopoly and didn’t feel they had a choice,” she says. “Over the last 18 months, we’ve brought Domain from this faded number two into a new position. We have reinvigorated the brand and we’re leading in some areas, such as mobile and social.”

Domain Group has more than 600 staff, and reported revenue growth of 45 per cent to $229 million in the year to June 30, 2015. According to reports in the Australian Financial Review, Domain’s market capitalisation last October was $1.7 billion, compared to REA Group’s $6.1bn.

Cruickshank says her first six months as marketing and editorial chief were spent recruiting the right capability into her team.

“Some people have left the business, and we don’t take a traditional marketing approach to what we do – almost all of our people have a significant digital background,” she says. In addition, many have come from product.

Cruickshank believes culture is key in business, and describes her recruitment style as about ensuring “everyone has each other’s back and supports each other”.

“Most people can do the job in some capacity, and they’ll have different ideas, but getting along with you is important as I’m going to be having a lot of conversations with you,” she says.

These conversations aren’t just across the content and audience function, they incorporate Domain’s product and tech teams, too. Both Cruickshank and Domain’s chief product officer, Damon Pezaro, report directly to the CEO and she flags this relationship as a vital one for brand innovation and development.

“We have an incredible product team, which my team works really closely with and that’s been a joy,” Cruickshank says. “The product team aren’t looking in Australia but to overseas for inspiration. We fly them to the US regularly and there has been lots of insights coming out of that.

“Damon is very much an execution-oriented guy. There’s no doubt we have robust discussions and we love it. We’re focused on giving Domain every chance and the morale at the moment is very strong, so we’re going for it. He’s also about trying things and if they fail, we move on.”

Cruickshank adds the chief product officer and chief technology officer are the two most important roles she deals with day in, day out.

Thanks to digital, marketers have more metrics than ever before, but it can lead to short-term, less strategic thinking. Cruickshank agrees CMOs must balance immediate ROI with the need to do things differently, but says agility is what gives you the scope to do both.

“I actually think it’s OK to be short-term with digital,” she says. “That’s the beauty of digital – you can pivot really quickly, and it’s moving so fast, I don’t know that you can plans things out that long. I’m comfortable with that.

“We have a business where we can think of something and execute on it very quickly. Some ideas work, some don’t, and that’s fine. I say to my team this is rare, so make the most of it. I’ve been in jobs where you’ve had to have 400 business cases to change a button.”

Cruickshank points to five or six key channels for Domain, including its weekly print publication.

“When we have used print as a marketing channel, it has been incredibly effective. We have forgotten how well it works. I do think it works as part of mix and that’s how we use it,” she says.

“Outdoor is another big channel for us as it translates to all audiences. Social is also central to what we’re doing simply because content drives a lot of our communications. We’ve grown our audience from 50,000 to 450,000 in 12 months, and we’re happy with that. It’s not just the reach number but engagement, which is what we’re watching closely. Paid search is the other core component.

“Even though it seems like a lot, it’s clear to me that all the different channels have different metrics. As long as each is giving you a story and you can take that away and translate it to the business as to what’s happening.”

Editorial lies at the heart of Domain’s brand awareness strategy, and is what has allowed the group not only to build trust with property buyers and owners, but retain them. Cruickshank points out the average time people spend looking for a property is 18 months.

“What we’re trying to do is ensure that once they have found their property, they still engage with Domain,” she says. “Content for us has been a way of keeping people more informed, making them understand the market, and after they’ve bought their property, helping them.”

One recent content strategy Cruickshank’s team has employed is bringing more humour into the property market to extend Domain’s reach into passive audiences. As an example, she points to its Avalon Now series last year, which took a humorous look at the passion people have about the suburb they live in.

“People who weren’t looking for property engaged with our brand in a way we never would have imagined,” she says. “When they do look for a property, they’re going to think about our brand. Content has brought enormous value to what we’re doing and that additional layer in terms of traditional acquisition assets.”

Content has also been generated around Domain’s sponsorship of The Block TV show, and data is providing a rich source of ideas for editorial pieces.

“We’re also producing content every hour,” Cruickshank says. “A year ago, we were producing one weekly print piece; now we have a team coming in and living and breathing what’s going on in the market.”

Another area Domain has focused on is the rental market, and Cruickshank notes some of the most popular stories have been for this segment.

“If there’s one word that defines our division, it’s being authentic. That’s the way you’re going to reach new people,” she continues. “And to do that, you employ great journalists. Journalism has been key to our success.”

In terms of Domain’s above-the-line messaging, Cruickshank is then putting the group’s editorial and app products at the heart of her communications.

“Our messaging to our consumers is all around our product – for example, this is why you need to use the Domain App, because it helps you search for a property, a school catchment zone, it gives you instant notifications,” she says. “We just say what it is. It might not be the most sophisticated way but it’s working.”

The other priority is on building the capabilities of Domain’s mobile app, and Cruickshank is taking the opportunity this year to bring in additional people with app marketing and app skills into her team.

It’s not surprising then, that Cruickshank doesn’t see herself as a traditional marketer.

“I see myself as someone from the digital product side who’s using different methods to grow audience,” she says. “I think that is what marketing equals now. I hear about people still talking about in-depth brand tracking studies, and while I don’t judge it, I don’t know if that stuff is as relevant anymore because you have real-time data coming in and out. You’ve got to be able to read through it and understand it. But it’s never been a better time if you’ve been into digital marketing.

“You have to hire smart people around you who understand it, and ask the right questions. And I pick five or six metrics and look at those all the time.”

Cruickshank was selected as one of the inaugural CMO50 for 2015. You can read details from her submission online here.