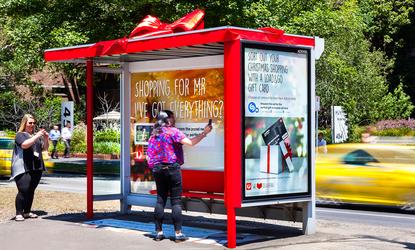 The campaign sees Australia Post ‘gift-wrap’ selected Adshel bus shelters in Melbourne and Brisbane, and encourages consumers to directly purchase the gift card by ‘Shazaming’ the ad through the in-app camera on their mobile phone. Doing so takes the consumer to an Australia Post online page where they can complete the purchase.

“It is great to see an idea come to life so relevant for consumer needs at this time of year, and enabled by innovation that makes interaction and fulfilment easy,” said managing director of Australia Post's out-of-home specialist Posterscope, Joe Copley.

The campaign is appearing on outdoor panels until 13 December.