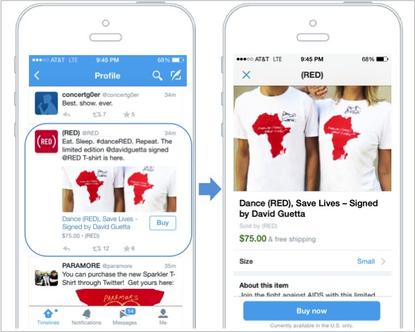 Australian ecommerce platform player, Bigcommerce, has joined forces with Twitter on its ‘Buy Now’ button as the social platform sets its sights on allowing brands to promote and directly sell products across its network.

Under the arrangement, Tweets including links to products sold by Bigcommerce clients are automatically converted into buy buttons, allowing consumers to search and purchase products from within the timeline. Other ecommerce platforms supporting Buy Now include Shopify, Demandware and Stripe Relay.

In a statement, Bigcommerce said merchants would be able to include a buy call to action on promoted or organic Tweets, highlighting products relevant to social conversations and providing a way for consumers to search for products across desktops, mobiles and tablets. Buy Now also features a native checkout capability, as well as a ‘checkout flow’, which stores and encrypts payment and shipping information so that consumers can make repeat purchases within two clicks.

The Buy Now button will be available in the US first over coming months, before being rolled out internationally in 2016.

Retailers tapping into the capability include Best Buy, Adidas and PacSun.

“We’ve been a long-time partner of Twitter and this is the latest step in working together to innovate our social shopping and commerce experience,” said Chris Murphy, managing editor of Adidas’ Newsroom. “We will continue to work with Twitter to lead the social and digital conversation with a focused pursuit of seamless shopping.”

Twitter first launched tests on the Buy button 12 months ago, partnering with a number of US merchants and musicians on offering products for sale.

Twitter is not alone in its efforts to bring ecommerce functionality directly into its network. Facebook is also helping businesses create online storefronts and has been testing buy buttons in its news feed as well as business pages for the past year. Pinterest also introduced buyable pins in users’ feeds earlier this year for major retailers including Macy’s and Nordstrom.