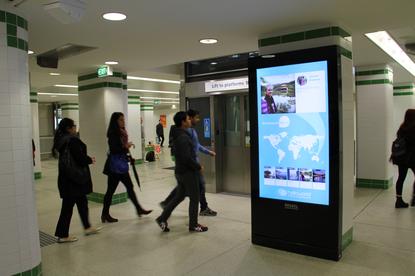 Adshel has unveiled a new out-of-home ad campaign that connects social and digital channels as part of a marketing initiative for travel group, helloworld.

Partnering with over 60 countries and more than 75 Instagrammers, helloworld created an Instagram relay - #helloworldRELAY - that captured countries, cities, people and places, through creative and inspiring images in late September.

Supporting the relay, which was held on World Tourism Day on 27 September, the campaign captured live content from the #helloworldRELAY hashtag and distributed dynamic updates across Adshel’s Sydney Trains digital screens, engaging audiences and encouraging them to interact and share their own experiences and photos.

“This campaign is using digital platforms to show a unique perspective on global travel," Adshel sales and marketing director, David Roddick, said. "By pulling dynamic, live and location-based social media feeds onto our digital screens, Adshel Live is bringing the virtual relay to life in a way that has never been possible out-of-home before.”

The Adshel campaign also allowed commuters to interact with the digital screens and view travel deals to various destinations across the world.

Helloworld chief marketing officer, Kim Portrate, said beyond the relay, the travel company is also thrilled to be collaborating with Adshel in an exclusive one-year partnership that will see the company further utilise emerging digital and data technologies.

“This has been a herculean project and Adshel has given us the perfect platform to visualise and distribute these truly inspiring destinations,” Portrate, added. “Adshel’s digital screen network offered a national solution that will create social media buzz and inspire people to book their next holiday.”