Analytics employed in digital thank you campaign for R U OK? Day 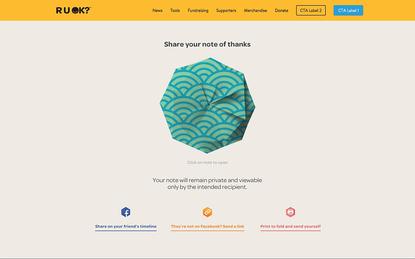 A new campaign launched in advance of this year’s R U OK? Day is using data analytics to turn thank you letters into unique Origami shapes consumers can share with each other digitally.

The new campaign has been launched by DT and aims to encourage consumers to write notes of thanks to those who have helped them via the not-for-profit website, ruok.org.au. Every note written will be analysed by an algorithm that uses the words, placement and number of letters used to create an origami shape that is then sent on to the recipient. These notes can then be shared on social networks, via a link, or can be printed out and folded into physical origami shapes.

According to DT, the coloured patterns are inspired by traditional origami patterns that hold different meanings, and that feature the colours of the R U OK? brand palette. As well as allowing site visitors to create their personalised messages, the agency also sourced a selection of pre-written thank you notes to use.

DT executive creative director, Jerker Fagerstrom, said the ambition was create an easy and visual way for people to say thanks.

“For this year’s R U OK? campaign, we wanted to acknowledge the people who already ask that question and remind them – and others – that a caring conversation can take someone out of the darkness, into a brighter and more hopeful place,” he said.

Once the algorithm analyses the note, it plots a 3D coordinate and creates an origami shape in real time using WebGL. According to DT, the technology and use of javascript frameworks works ensures integration across multiple devices, browsers and channels.

“We hid the complexity of the tools functions behind the scenes, appearing as a single-page application – reconfiguring, adapting and revealing content all based on the action of the user, rather than having to continually reload pages,” Fagerstrom said.