Rachel Botsman: Trust is the currency of the 21st Century

Global expert on the collaboration economy highlights the rise of digital services such as Airbnb, eBay and Uber as triggering a profound shift in trust between brands and consumers 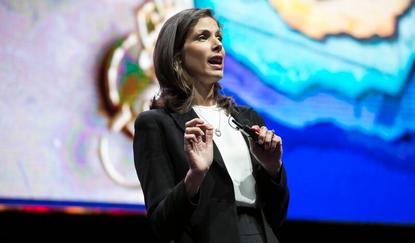 The collaborative economy has turned trust into a commercial currency and triggered a new way of doing business driven by the reputation not only of brands, but also consumers.

That’s the view of global collaborative economy expert, author and speaker, Rachel Botsman, who took to the stage at this year’s Adobe Digital Marketing Symposium in Sydney to talk about how consumer and organisational value is changing in light of digital disruption and the rise of community-based businesses such as Uber, eBay and Airbnb.

“Technology has created the efficiency to match millions of haves with millions of wants at a scale never seen before,” she told attendees, noting that $15 billion was invested in startups in this space last year. “It’s transformed the way we think about supply and demand, and our view of people who were previously consumers.”

According to Botsman, trust mechanisms inherent in this collaborative economy are changing human behaviour and the relationship between people providing and using services.

“Trust between strangers is the currency of the 21st century,” she said. “People are starting to recognise the reputation they are building up creates value.”

Botsman pointed to online retail marketplace, Ebay, which is based on trust between strangers, as an early example of the changing relationship between companies, borrowers, producers and lenders. A similar trust relationship sits behind thousands of other digital stars such as Facebook, Uber and Airbnb.

“These decentralised platforms and networks unlock the value of underused assets, and match needs with haves in a way that bypasses traditional organisations,” she said. “It completely changes the way people find products and services and how they’re made, but also the perception and reputation of brands.”

For Botsman, disruption hinges on a changing concept of value. To help attendees understand this, she posed three questions: How is value created; how is value scaled; and how is value trusted differently?

To show how value is now being created, Botsman highlighted the rise of online accommodation marketplace, Airbnb. After just seven years in business, Airbnb is the second-highest valued hospitality brand in the world after Hilton Hotels, with more than 1 million rooms available in 192 countries and valued at US$25bn.

Another well-used posterchild for the collaborative economy is Uber, and Botsman pointed to real-time parking marketplace, JustPark, as another more recent addition to the mix. JustPark combines peer-to-peer with commercial parking supply as a service, and partnered with BMW last year to integrate its app into car dashboards.

All have been made possible by advancements in social, mobile and location technology, and the ability to tap into underutilised assets that already exist in the marketplace to provide value at scale, she said.

But the more profound change is around trust. What’s interesting in the collaborative economy, is that it’s not just the trust consumers have in brands, but their own trustworthiness that is making the wheel go round, Botsman said.

“What we’re just starting to see emerge are these two-way rating systems,” she said. “We now need the information to decide how to trust individuals, not just institutions.

“When you stay at Airbnb or use an Uber service, you have to ask that question: Can I trust this person?”

This two-way trust system is even starting to change human behaviour. She used the example of a US consumer, Kate, who used her positive Airbnb host reviews to obtain a rental agreement.

“People are realising the reputation they’re building up on these platforms is becoming a form of capital, which could become more powerful than credit histories over the next 10 to 20 years,” Botsman claimed.

Botsman said the future for marketers will come down to how they think about “three Cs”: Culture, community and consumers.

“Firstly, we’re going to have to think differently about culture… we’re going to see intersection between organisational culture and platform or marketplace culture,” she said.

With regards to community, Botsman said the problem many brands still have is that they treat community as an ad-on, which they can manage largely through social media. “In startups, there’s no distinction between community and company, community is… the lens through which every decision about the touchpoints with consumers,” she said.

Botsman also claimed the term “consumer” could die out as passive consumers are replaced by lenders, finance makers, and providers, changing the experience expected with companies.

As a final remark, Botsman encouraged attendees to think hard about what value means today.