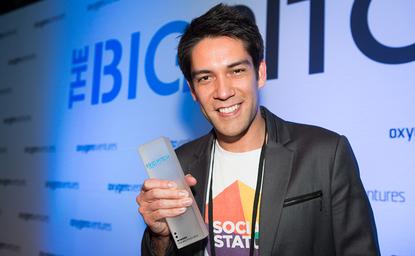 Sydney-based social media startup, Social Status, took out top honours against a pool of 300 other Australian entrepreneurs. Co-founder and CEO of Social Status, Tim Hill, said the idea for the insights tool came from his own experience as a marketing and advertising executive, and the challenges he faced demonstrating social’s ROI in terms of engagement and conversion.

Hill began his career as a Web developer, before switching to TV and then spending six years in digital and advertising agencies including BMF Advertising and Reading Room.

He described Social Status as a “Google Analytics for social media”.

“The tool is for anyone who has KPIs for social or engagement and enables them to make sense of and quantify their marketing efforts,” he told CMO. “The pain point is that it’s hard to communicate up to the CMO and CEO about the value of social to the business – there’s no framework or set way to do it, and a lot of marketers have had to make it up as they go.

“When you use our platform, you understand your brand’s performance against the category, so it gives you context around the numbers. It also speeds up reporting – a lot of marketers spend hours manually compiling reports, so we’ve automated a lot of those processes.”

To do this, Hill said it has indexed more than 4000 brands to provide best practice benchmarks and actionable insights off the data.

The platform, which has been in development for the past two-and-a-half years and was launched at last year’s CeBIT event, was further developed when Social Status started working with the University of Wollongong’s accelerator program, iAccelerate.

The Big Pitch Win also comes as the company strives to raise $1.5 million to build out its operations. Hill said the first big area of focus is to extend its Facebook-only capabilities across Twitter and Instagram, providing marketers with a multi-channel tool. The second focus is conversion tracking and providing full-funnel metrics.

“Many marketers don’t have a full [social] engagement approach, so we’re working to have that link from revenue generated back to the social posts,” Hill explained. Social Status is also working to ensure marketers can link other conversion activities, such as signing up to a newsletter or downloading a PDF, back to original social posts.

The multi-channel capabilities are due to launch in Q3, while the conversion tracking is planned for the end of the year.

Hill delivered his five-minute pitch live at the Melbourne-based event, which attracted more than 350 technology investors, industry leaders, media and the startup community to share in $5 million in investment capital. The event was also streamed live online.

Social Status was awarded with a commitment of $1 million in capital raising, which will be invested by Oxygen Ventures. The investor will now undertake final termsheet discussions, strategic planning and a due diligence process with Social Status.

Alongside Social Status, Adelaide-based nano-satellite startup, Fleet, was recognised on the day with the Peoples’ Choices Award. The company is looking to build the first low orbit Internet network using 150 satellites meshed together to offer connectivity to the most remote places of the world. The company won a workshop session with the digital team and $10,000 in advertising from Newscorp.

Three other finalists were announced: Gamurs, a social networking platform for video gamers; Biteable, a tool for corporates and SMEs to develop videos using a library of stock footage; and Storie, a tool for sequencing video scenes to create longform videos. All finalists can now access ANZ’s Business Growth Program and received $3000 in Amazon Web Services credits.

Hill said winning the competition was a great opportunity for Social Status to gain backing and credibility.

“The Big Pitch is fantastic for the start-up community to raise the profile of startups in Australia and help us become a technology hub like Silicon Valley, or Israel or other similar places around the world,” he added.