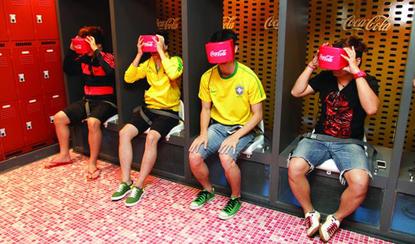 Thanks to the rise of more affordable, accessible and sophisticated headsets from Oculus Rift, virtual reality is becoming an incredibly immersive way for brands to engage consumers and customers.

Here, we highlight 10 recent examples of virtual reality in action during marketing campaigns and programs to see just how dynamic and creative usage can be.

To coincide with the World Rally Championships in Italy this June, Innocean Worldwide Europe has launched a 4D Hyundai driving experience for visitors based on Oculus Rift technology. The co-driving simulator is aimed at engaging motor fans while raising awareness of Hyundai’s strong performance on the rally circuit, and gives participants the chance to feel what it’s like to be part of a rally car race.

The driving experience is based on a motion platform that simulates centrifugal forces of up to 0.5g, alongside 360-degree footage of a race played through Oculus Rift glasses and motion and audio data from a racing vehicle. The companies said the multi-sensory driving experience was the first time these technologies have been combined, using specially developed software to merge the movement of the car with 360-degree footage and road noises. The experience was created by IWE and German partner agency, Herren Der Schöpfung.

In May, the airline extended the VR offering and announced it was producing a 3D film of the Great Barrier Reef and Hamilton Island, in partnership with Samsung and rapid VR, to present in select local and international lounges and flights.

In one of the more serious use cases of virtual reality for marketing, NRMA Insurance used Oculus Rift virtual reality headsets last year to promote car safety during an exhibit in Sydney. The Crashed Car Showroom was based around a crash test dummy simulation and 'driver' experience of what it’s like to be in a car crash. The experience included a modern car and a Commodore from 30 years ago.

The tester sat in a real car linked to a hydraulic system that moves the car in sync with virtual movements in a 3D simulation. Wearing an Oculus Rift headset, the driver was surrounded by the 3D simulation and can turn his or her head to examine the inside of the car and look out the windows. The simulation was built through collaboration between an ad agency and a film production studio. It was developed with Maya 3D animation software and the Unity game engine.

Read more: What T-Mobile is doing to become a customer-led carrier

Read more: Why brands are increasingly attracted to Snapchat

Teleporting to a Hawaiian beach or London

In a trial of VR by Marriott Hotels, a 4D sensory experience was created to ‘teleport’ guests to different destinations including beaches in Hawaii and downtown London. The brand partnered with special effects experts, Framestore, and experiential marketing agency, relevant, to create the virtual travel experience delivered via a specially crafted ‘travelling teleporter’, which toured eight US cities last September. The phone booth-shaped structure featured the Oculus Rift DK2 virtual reality headset, wireless headphones and a suite on 4D sensory elements.

According to the companies, the experience required developing a new technique for capturing 3D, 360-degree live-action video, which was then mixed with photo real computer-generated imagery and 4D elements such as heat, wind and mist. Guests would travel from a Marriott Greatroom lobby to a black sand beach in Maui, for example, or the top of the Tower 42 skyscraper in London.

Marriott Hotels brand marketing VP, Michael Dail, said the exercise was about giving the next generation of travellers “the clear cut notion that more amazing travel experiences are coming and to encourage them to co-create the future of travel with us on TravelBrilliantly.com, where their best ideas enter Marriott’s innovation pipeline”, he said. “Together, we are pushing the limits of what is possible.”

During last year’s FIFA World Cup, Coca-Cola partnered with YDreams' virtual reality technologies to immerse visitors in the "Casa Coca Cola". Visitors were taken to a mock locker room in Brazil's Maracana Stadium to put on VR headgear that took them from the locker room to the pitch during a 2014 World Cup game, where they played for the home team.

"It's about the authenticity of being inside that stadium," said Matt Wolf, head of global gaming at Coca-Cola, adding that participants would recognise that the experience was "thanks to Coke".

AMP Capital Shopping Centres’ Virtual Voyage installation launched during the company’s Amplify Festival in June and is designed to improve engagement in its retail locations. The trial experience allows consumers to use either a Google cardboard headset, powered by a Google Nexus device, or a Samsung VR Headset, powered by the Samsung Galaxy smartphone, to participate in a virtual reality experience.

The Virtual Voyage builds on the notion of a customer’s ‘third place’, and showcases Australian environments. AMP plans to take the VR activity on a roadshow of its national retail malls during upcoming school holidays.

Google and Mattel employed virtual reality to summon warm memories of childhood as part of a campaign to highlight a modern take on the iconic View-Master toy.

Instead of just displaying 3D pictures, the next-generation View-Master headset will allow kids to go on interactive virtual reality experiences such as 360-degree tours of planets, undersea adventures or fly-by tours of famous sites or cities. The new View-Master is based on Google's Cardboard virtual reality technology, and stereoscopic video will be delivered through "experience reels". For example, users will be able to walk into Alcatraz to see what it's like, or take a short road trip around San Francisco. The virtual reality images combine photos and computer graphics.

A Google team worked with Mattel to develop a product concept over about five months. Images for the new product are being pulled from Mattel's old View-Master database dating back to 1940. It will also add more interactive games.

Oculus Rift VR glasses were used in by Paramount Pictures in partnership with IMAX as part of the launch of the film, Interstellar, last November. The immersive experience gave US and Canadian consumers a virtual first look at the film’s Endurance spacecraft and the ability to travel through zero gravity at select cinemas with IMAX screens.

Related: Why it's time brands got more 'phygital' with customer experience

Related: Interview: The business case for mixed reality in marketing

According to the companies, it took 15-20 people two months to painstakingly recreate the Interstellar world and ship used in the movie. The experience was also showcased at this year’s South by Southwest event in Texas.

Framestore also worked with Relevent and HBO to create an immersive virtual reality experience around the popular TV show, Game of Thrones. Utilising Oculus Rift VR headsets, the Unity game engine, VFX pipelines, wind machines, real elevators and rumble packs, users entered the Game of Thrones world, including the elevator in Castle Black and ascending the 700-foot ‘Wall’. At the top, users then got to walk the wall and see ‘The North’, along with experiencing several plot twists.

This isn’t specifically marketing, but Landmark Entertainment Group has announced plans to launch an amusement park decked out in virtual reality experiences for consumers.

The company, which is behind immersive rides such as Jurassic Park: The Ride, and The Amazing Adventures of Spiderman 5D, says the Landmark Interactive Virtual Experience (LIVE) in China will feature up to four hours of VR content, such as a virtual zoo, aquarium, interactive museum and digital art gallery. Work on the ‘mixed reality’ site is expected to start in the next 12-18 months.