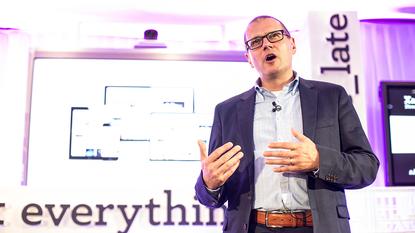 Facilitating, rather than dictating, consumer experience is the ambition behind Hello bank!, a digital-only banking brand launched by BNP aimed at 18-35 year olds. The story of its evolution and innovative marketing strategy was presented by Dumon at the AMP Amplify Festival in Sydney on 4 June.

Hello bank! was first unveiled as a mobile-only consumer banking brand in Belgium and France in May 2013, followed by Italy and Germany later that year. Dumon told CMO the launch was a response to changing consumer behaviours, as well as the expectations younger generations of consumers had around always-on, easy-to-use banking products and services that fit their lifestyle.

But within five months, it became apparent the limited product set and approach needed a radical rethink.

“The results of our first research efforts with customers were sobering and showed us we had to improve in several important areas,” Dumon said. “For example, the mobile approach was too restrictive and also needed to include mobile access using a laptop.

“So we decided to change our strategy.”

Aim at and target consumer lifestyles

Working with Belgian-based youth trends agency, Trendwolves, Hello bank! crafted a new go-to- market strategy based on three pillars: Repositioning as a lifestyle brand, adopting the “buddy principle”, and targeting specific “tribes” or consumer communities through their interests and behaviours.

“We are more than a bank: We want to be a lifestyle choice for communities within the next generation,” Dumon said.

“I use the analogy of Batman and Robin: We have to be Robin, and customers are the heroes – they are Batman. I’m convinced we as a brand have to be modest and become the facilitator in the transformation process.”

Banks had become less relevant to younger consumers because they didn’t match their lifestyles, Dumon continued. In contrast, popular brands such as Google and Apple work to fulfil consumer demands and build trust.

“Banks have also had a similar approach and product offering, and younger people don’t know what makes one bank different to another,” he said. “The question was how we can compete with brands with higher relevance when our own relevance was going down.

“We did this by putting ourselves outside the banking world with Hello bank! as a separate brand, and building a lifestyle brand interacting directly with our customers.”

Hello bank! has a particular focus on the Generation Z, or those born from 1995. These consumers are characterised by success, survival, down to earth, unlike Gen Y and Millennials, who are dreamers and people who want to be discovered, Dumon said.

Using these consumer traits, Hello bank! then defined ‘tribes’, or communities of consumers it wanted to target. Tribes could include crafters and entrepreneurs and jetsetters, Dumon said.

“We are putting a focus on events and activities related to the interests of each of these tribes,” he explained. “We have 11 tribes so far, but these will evolve over time.”

The underlying objective is creating as much traffic as possible for the institution’s digital ecosystem, Dumon said. From there, Hello bank! looks to convert consumers into customers. To make this process less rigid, Dumon said it is introducing a system of progressive membership online.

Hello bank’s marketing strategy also had an overhaul and is now based on three axes. The first is education interaction. Dumon said the bank has partnered with university professors to tell the story of Hello bank! to marketing and psychology students in an interactive way.

Using Hello bank! as a case study, students come up with marketing and communications plans, and the company listens to these assignments and provides guidance and comments on strategy. “It’s about getting that direct connection with these target groups,” Dumon said.

The second element to its strategy is launching ‘phygital’ stores that combine physical and digital experience. The ‘phygital’ pop-up stores appeared in Belgium initially for three months and included interactive technology elements such as 3D printing, holograms, and printing your own T-shirts. Dumon said it also organised full-day workshops and lectures on lifestyle interests of its target customers such as photography, creating music, and writing articles.

“Customers don’t see a difference between online and offline channels,” he commented. “So we combine the benefits of traditional retail with the benefits of online retail where digital elements are seamlessly integrated in the real world.”

The third axis is co-creation with customers. To achieve this, Hello bank! has built a student consulting group that helps develop products and services.

“This ensures we’re always in contact with our target groups and we can ensure our products align with their changing behaviour and needs,” Dumon said. ”This group of students are influencers and because of that, they attract other people interested in working together with us.”

Consumers have already helped redesign the Hello Bank! website, and a suite of mortgage products, which will launch at end of this year.

“With these products, we’re challenging the traditional offerings, and we’re listening to their needs to work out how to evolve and optimise our processes,” Dumon said.

Such a huge amount of change doesn’t come naturally, and Dumon admitted Hello bank’s model was both disruptive to traditional banking thinking and difficult to get off the ground.

“The first stage was to convince management, as they have to want to fund what we are doing,” he said. “Then you have to find the right people to work on such a project. It’s really about change and there’s always resistance in the beginning.

Innovation is not just in the product, but also in your approach and how you bring those products to market

“Now, it’s challenging most people in the BNP group to create a new customer dynamic.” For Dumon, product differentiator is no longer the battle ground for brands – it’s customer engagement.

“Innovation is not just in the product, but also in your approach and how you bring those products to market,” he said. “Our target customers are discovering Hello bank! another way, which is through the interests they have.”

As a result of this innovative approach, Dumon said BNP’s wider marketing teams are now realising the need to shake things up.

“They know they have to do things differently, and Hello bank! has been a laboratory to see how it’s done,” he added.

After two years, Hello bank! has attracted 400,000 customers, and brand awareness within its target groups is above 50 per cent, Dumon said.

Rather than invest in above-the-line, marketing spend is mostly oriented to performance-based, digital spend. Key areas of investment for Hello bank! include community activity, and sponsoring events for target demographics, such as the Belgian music festival, Tomorrowland. Social media has also been a huge area of focus.

Alongside acquiring new customers, Dumon’s now working to ensure customers continue to use Hello bank’s growing array of products and services, and are profitable.

“We’re still limited to daily banking and consumer loans, but we are looking to launch investment products,” he added.

More stories to inspire you to innovation