Actual tweets will appear on mobile devices, depending on the search 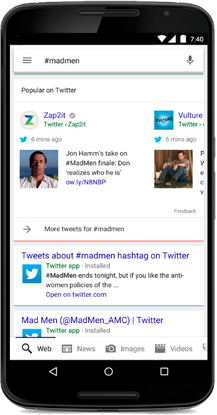 A Google search for "#MadMen" will now produce tweets like the ones pictured above.

Performing a search on Google now also displays relevant tweets from Twitter. The integration will widely distribute Twitter content beyond its own site and is also aimed at adding a new real-time element to Google search results.

The changes, previously announced earlier this year, take effect starting Tuesday for Google's search app on iOS and Android as well as the mobile Web, for U.S. users searching in English. A desktop version is coming shortly, Twitter said in a blog post. The feature will roll out to more countries in the coming months.

Google has provided links to tweets in its search results for some time. But the new integration will display actual tweets, including photos contained in them. Searchers can also click on the tweets to view them within Twitter.

Twitter symbols like the # hashtag and @ sign are needed for some searches to display tweets, but not all. A Google search for "#MadMen," for instance, prominently displayed a series of tweets related to the popular TV show, which searchers can scroll through horizontally. But a search for "Mad Men" without the hashtag did not display the tweets.

A search for "Taylor Swift," without a hashtag, produced tweets.

The integration comes as Twitter tries to get its content seen by more people in an effort to increase the number of its users. The company's syndication efforts also include placing tweets from advertisers in other mobile apps like Flipboard.