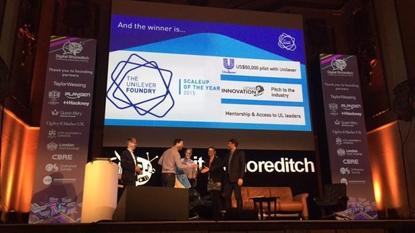 Unilever, the world's second largest advertising company and the owner of 490 brands, yesterday crowned UK digital firm, Glimr, the winner of its international Scale Up competition at the Digital Shoreditch festival in London.

Tech City startup Glimr, whose technology aims to help brands build a one-to-one relationship with consumers using offline data collected from iBeacons, went up against two other finalists: Little Bird from the US and Wobe from Indonesia.

Glimr was awarded the US$50,000 prize and the opportunity to pilot with the advertising giant, after judges from Unilever, startup accelerator Collider and software firm Kite, decided it had the most potential to work with Unilever's brands, which include Lynx, Magnum and Surf.

Its technology will enable Unilever to serve customers targeted ads as they walk around stores selling its products.

Glimr writes on its website: "Plug in Glimr's advertisement SDK powered by machine learning, offline data, and artificial intelligence to start building true one-one relationships with your customers. Understand and attribute the ability of advertisement to drive foot traffic to your stores and join the advertisement revolution."

Jan Harley, investment director at Unilever Ventures and a judge on the panel said: "Glimr is bridging the physical and non-physical world big, which is an area where big companies like Unilever struggle."

"We chose the winner based on the team, the technology and the area they're working in," he added.

Jeremy Basset, the director of Unilever Foundry, told The Drum: "They [Glimr] enable us to connect with consumers though beacon technology in more of a pull way than a push way, which I think is unique for beacons. I think in that way it has a lot of relevance to Unilever, not only in the UK but in many countries around the world."

Bassett said that Glimr's technology has the potential to be used across several Unilever brands but the strongest use case is probably in the company's out-of-home business, which includes ice creams and refreshments.

Glimr chief executive Robert Hedberg said: "We are hoping to bring an actual understating of who you are as an individual based on what stores you visit and help Unilever understand their target audience in a much better way - so for the first time bridging the offline and online gap."

In addition to the prize money and the pilot, Glimr will also be given the opportunity to pitch potential customers and investors at the Cannes Lion Innovation Festival this summer - which claims to be the world's biggest annual awards show and festival for professionals in the creative communications industry.

It's worth noting that UK retailer John Lewis is also working with Australian startup, Localz on how beacon technology can be used to sell and promote products.