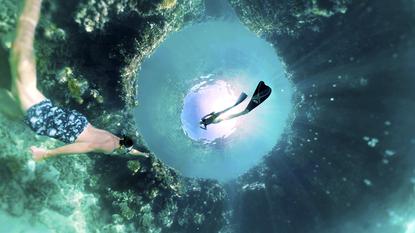 Qantas is extending its virtual reality initiative into fresh content, launching a 3D film experience of the Great Barrier Reef and Hamilton Island to promote the destination to customers.

The airline has partnered with Samsung and rapid VR to produce the new film, which will be launched in select international lounges and flights from 27 June.

The latest 3D film plans also mark the extension of Qantas’ flight services to Hamilton Island from Melbourne from 27 June. The airline will also add two return flights per week and upgrade one of its current services between Brisbane and Hamilton Island.

The content plan comes after a three-month test pilot program offering VR headsets in-flight on A380 services, as well as in Sydney and Melbourne international first class lounges , which the company’s group executive for brand, marketing and corporate affairs, Olivia Wirth, said had been a success.

“Our virtual reality headsets have already proven a hit with our customers in our lounges and on some of our international flights,” she said.

“This is a fantastic way for us to give our customers a unique experience of the Great barrier Reef and Hamilton Island, which we expect will translate into more people choosing to visit the Whitsundays for their next holiday destination.”

Read more: Why virtual reality is opening a new world for customer interaction