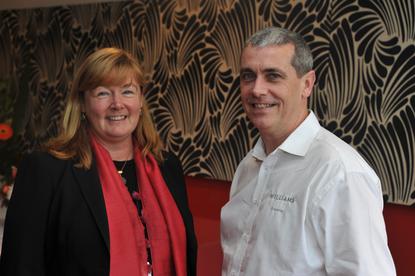 As a senior marketer, having a relationship with IT is vital. Engaging and working closely with IT executives at the highest level, often the CIOs, can help CMOs choose the right technology to reach customers quickly in the digital age.

It’s true that CMO-CIO interactions can be prone to friction but Avanade’s CMO Stella Goulet and Williams Martini Racing’s CIO, Graeme Hackland, are a shining example of a relationship that works well.

Late last year, Williams Martini Racing signed Avanade as its technical partner, in a multi-year agreement that has seen both companies create a new website among other projects for the 2015 Formula One race season.

The relationship is doing great things for the Avanade brand and it’s built on shared goals and priorities, said Avanade’s Goulet.

“Clearly the nature of F1 being a global sport is great for our business to reach our audiences and for us to be able to get brand awareness,” Goulet said. “More importantly, it’s about working to help the Williams team to get better success and performance both on and off the track.”

Avanade is working hand-in-hand with Williams Martini Racing, helping the racing team with its digital transformation. In fact, Goulet and Hackland have helped build a pipeline of 50 digital, ‘cloud-first’ projects around the world.

So far, Goulet and Hackland have worked together to ensure Williams Martini Racing’s new website – used by the media and fans – was turned around in six weeks.

“Marketing for the website is the first area,” said Williams Martini Racing’s Hackland. “At the end of this initial phase, we recruited an internal team within Williams who can run with it and we bring in Avanade to help us with some of the specialist portals and content that we want to create,” he said.

Avanade is also helping Williams Martini Racing to digitise workflow across its organisation in areas like human resources. The company has rolled out SharePoint Online, and moved from Lotus Notes to Office 365 and Microsoft Lync to improve information flow across the organisation.

Currently, Williams Martini Racing puts half of the resources it receives from Avanade towards its performance engineering applications – the apps it uses at the track to improve the performance of its F1 cars.

The first app – a tyre optimisation solution – went live during last month’s F1 race in Melbourne. The app provides engineers with statistics around the performance of tyres and how long they are expected to last.

“It’s all about [using technology] to make the car quicker… and Avanade is helping me deliver [these solutions],” Hackland said.

The pressure is on Williams Martini Racing to create new products after every race and roll out agile services faster than most companies.

According to Hackland, race-by-race during the 2015 season, Williams Martini Racing will add functionality to its technology platforms using a proper testing regime, which the organisation has not had in place previousl.

"We need to bring in a lot of expertise around software development testing and move towards automated testing. Avanade is helping us with that," Hackland added. "In the past, we haven't always focused on the user and their experience. That's something that both companies are really focused on producing. We've had a UX [user experience] designer come in and help us with that."

"We want to build things that are intuitive for any engineer and we are getting that knowledge from Avanade because we don't have it internally."

According to Goulet, working closely with IT specialists has helped marketers overcome the challenge of choosing the right digital tools to reach customers quickly,

“There’s a proliferation of [digital marketing] tools so it has become more complicated… it’s a challenge to get those tools put together in the right framework and integration into systems,” she said. “You can go out and buy tools to get data or leads but if you don’t work with IT to get them integrated into back office systems, you lose a lot of value that would gain by having the end-to-end view of the customer.”

Goulet claimed while marketers aren't known for their analytical skills, the IT department need to play a pivotal role around collecting, managing and having one view of data for better decision making.

“IT has traditionally tried to exert a huge amount of control. The reason we are in this situation now and talking about a CIO/CMO split is because the CIOs weren’t open to that relationship and didn't focus on what the CMO needed,” he said. “It’s no longer about control, our [CIO] role is to protect the company and data and protect the executives who are going to go to jail if that data goes missing."

“That’s the role that we can play. We shouldn’t care what devices people are using, we shouldn't be trying to lock everything down – we should be setting the standards. We used to control the OS and devices, in the world we live in now, it’s not the right thing to do,” he added. “It is a partnership because ultimately the CIO and the CMO want the same thing, they want the company to be successful and they are both on the same journey.”

Goulet encouraged CIOs and CMOs who don’t have a good relationship to start meeting regularly to create a level of trust and shared business goals.

"So these two people can come together and translate for the rest of the organisation," he said. "We have found that to be effective in rolling out projects together."

Williams Martini Racing's own CMO also works closely with Goulet and the rest of the marketing department at Avanade to provide messaging around the technical services being delivered by the organisation.

"There are two strands to this relationship where we have to deliver quality products very quickly that can be used to help us gain competitive advantage, but at the same time we want to share those stories about our success together," Hackland concluded. "So there has to be a strong relationship between our marketing team and Stella and her team as well. From early on, we've seen that go really well."