It has many of Messenger's mobile app features 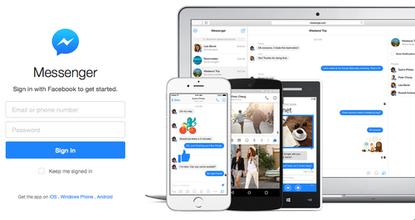 Facebook has launched a standalone Messenger app for chatting on the Web outside of Facebook.com.

The move is Facebook's attempt to create a dedicated hub for chats on the Web as it incorporates many new features into the Messenger mobile app, and grows its use. Facebook users can still chat with others as they would normally do on Facebook.com. But the new Web app, accessible at Messenger.com, is aimed solely at messaging, without other distractions like the news feed or profile pages.

To use Messenger.com, which went live on Wednesday, users must sign in with their Facebook credentials. It works largely the same as the mobile app, with support for voice calling, stickers and emoticons, and syncs chats across devices.

On mobile, Facebook has extended the functions of its Messenger app well beyond simple messaging. For example, users can now send each other money within the app. Third-party developers can also integrate their software into the app, giving users more ways to place digital content inside their chats. Facebook is also making Messenger a platform to let users interact with online retailers and receive updates on the status of their orders.

Facebook's Messenger app now has roughly 600 million users who log in monthly, which is almost half of Facebook's total user base.