Rene Carayol: Leadership is about culture and vision, not strategy or marketing 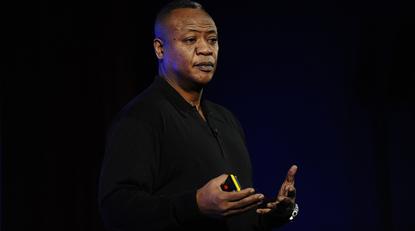 Marketers looking to become the next CMO and CEO will need to rely on their leadership and cultural skills, not marketing or management expertise, if they wish to succeed, according to a respect global business consultant.

In the first in a series of lectures under The Marketing Academy’s Leadership Programme, UK-based business and leadership speaker and columnist, Rene Carayol, shared his advice with budding CMOs on how to rise up the ranks within an organisation.

During the two-hour presentation, Carayol used a raft of examples and stories to emphasise that cultural stewardship and vision are the keys to leadership, rather than strategy, process and specific skillsets.

“Too many people think marketing processes will get them to the top of the organisation. This isn’t the case for a couple of reasons: One, is that your heritage will not be your destiny,” Carayol told attendees. “Nothing has changed more than the marketing function. Becoming an expert is not good enough, you need to lead.”

The second cornerstone for leadership is to manage less and lead a little more, Carayol said. “You can train and measure management, leadership is different… And this is an attitude we don’t see enough of in the marketing function,” he said.

To outline why marketers are well-placed to become the next generation of business leaders, Carayol referred to three disruptive changes impacting the way organisations need to function today: Demographic shifts, global power structures, and disruptive innovation.

As a result of these factors, the pace of change organisations have to embrace to remain relevant has rapidly accelerated. While it used to be the case that businesses could take about five years to transform and refresh, Carayol suggested the business lifecycle is currently sitting at 18 months and falling.

In the US, this current state of affairs is referred to as ‘VUCA’ – volatile, uncertain, complex and ambiguous, Carayol said.

“Management won’t cut it, nor will strategy. You can’t navigate that. You have to get used to ambiguity, and not going back to simple, consistent ways,” he said.

In addition, organisations are facing global overcapacity in every industry, making it even more imperative to find a differentiation point. Adding to this is commodisiation and the fact that products released today can be copied tomorrow, he said. It doesn’t help that everything is cheap either, he said.

At the same time, with 40 per cent of the world’s unemployed population under the age of 25, Caroyol warned of a “generation at risk”. This is even more disturbing given 87 per cent of organisations claim to have a talent shortage, he said.

“The next generation is more concerned with the values of the organisation,” he said.

All of this puts marketers in a great position if they can embrace the core virtues of leadership, Carayol said. He noted that in the last five years, CEO have come from operations and finance functions, taking the focus away from innovation and growth. But that’s exactly what is now needed.

“We have forgotten growth and how to stimulate it,” he said. “It’s time to get out of austerity thinking and time to think differently. What a moment for the marketing function.”

Carayol had a number of key messages for the budding leaders in the room. The first was to “be the change you wish to see”.

“The most powerful agents of change are the leaders,” he said. “They are an organisation’s close proximity role models.”

The boss is also the biggest influencer on attitudes and behaviours, Carayol continued. “No one owns culture, but you can be its steward,” he said, adding that “managers do strategy, leaders tell stories”. “Stories are one of the best ways to drive culture.”

To help illustrate the difference between management and leadership, Carayol listed the tools of the management trade as strategy, plans, tasks, balance scorecards and process, or “the hardware”.

Leaders, meanwhile, are about vision, people, culture and teams, or the “software” and emotional IQ of a business, he said. Both have a place in organisations today, but Carayol advised attendees not to get the two skillsets mixed up.

“Leadership is how you energise people – you have to give them something to believe in,” he said. “Leaders do people: Period.”

Carayol then used the very different cultures of Apple and Google to highlight the need for leaders to foster a strong and identifiable culture within their organisation, whatever that may be.

“You can’t say either are unsuccessful, or right or wrong,” he said. “How clear are you able your business? Both of these organisations [Apple and Google] are fantastically clear about what they do.”

Rene Carayol’s 10 tips to being a leader