The idea is to expose even more people to the Google brand, and all its products, in an 'amusement park' atmosphere. 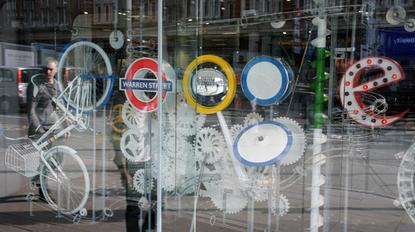 There is a big Google sign outside to show people they have come to the right place.

Opening its first store-in-a-store in London this week, Google is looking to raise its already worldwide image.

That's the word from industry analysts after Google announced today that it's opening what is going to be called the Google Shop in Currys PC World, a well-known electronics store in London.

"This is about marketing, not selling," said Ezra Gottheil, an analyst with Technology Business Research. "While Apple's stores are real stores with huge volumes, this is about building the brand and exposing people to Google who don't know about all the Google offerings."

The Google shop is set up to offer customers the chance to see and try out Google's range of Android phones and tablets, Chromebook laptops and Chromecast streaming-media devices, as well as learn about how they work together, according to the company.

Store visitors also will be able to try out Google's software tools and apps, using a series of immersive features, like a Chromecast Pod that allows users to play movies and YouTube videos, as well as an immersive surround-screen installation called Portal, designed to let users seemingly fly through any part of the planet using Google Earth.

"It's more an amusement park than a shop, which is what, I think, Google intends," said Gottheil. "Google is doing a very good job with its brand, but it can always be better. You can't be too rich, too thin or have good enough marketing."

Dan Olds, an analyst with The Gabriel Consulting Group, noted that as popular as Google's products, like Android, and services, like Google Maps and Google Earth, are, there's always room for improvement.

"I think that Google sees the need to make their products even more accessible and sees the store as one method to explore," he added. "However, they have to realize that these are going to be loss leaders. It will be difficult, if not impossible, to measure the actual value of the stores to Google's bottom line... If I were them, I'd look at store traffic as the major metric. If they're getting people into the store, then it's a win."