The c-level leadership team will face a challenging 2015 figuring out how to provide a better experience to customers, said Forrester's James L. McQuivey 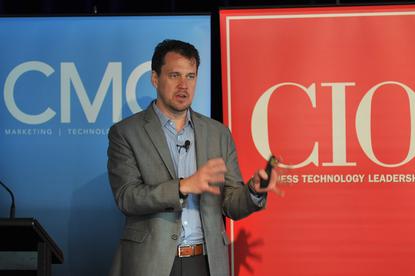 Many companies have not developed the policies they need to build digital relationships with consumers and significantly alter their traditional business models.

That’s according to James L. McQuivey, vice-president and principal at Forrester, keynote speaker at the Executive Connections event on ‘Developing Your Digital Intelligence’, produced by CMO, CIO and ADMA.

“It’s an economic issue about serving your customers more efficiently through whatever devices they happen to have,” McQuivey told attendees. “This is not easy – companies have to change the way they think on a couple of levels."

Companies need to ask if they have a base level of energy or excitement to create digital initiatives, the required skills, and importantly, the organisational policies to ensure these programs succeed, McQuivey said.

According to Forrester research, 32 per cent of organisations don’t felt able to disrupt themselves in the face of digital change.

In addition, according to the analyst firm’s Assess Your Digital Disruption Readiness Now report, only half say they have the policies and business practices in place to adapt to the changes digital throws at their organisation. Alarmingly, that figure dropped to 24 per cent across staff working within the business, excluding leaders. This is despite the fact that 89 per cent of organisations see a significant opportunity for digital tools and experiences to change the way they serve customers.

McQuivey said the leadership team – the CEO, CMO and CIO – will face a challenging 2015 as they try to figure out what to do about digital disruption while the customer waits for a better experience.

He also called on c-level executives to work towards putting the customer at the centre of innovation efforts.

“Let the CMO – who understands the customer experience – identify what would need to be done, even if it stresses the business model, but then respect the CIO’s need to do it the right way,” he said.

This is not difficult if organisations do the simple thing and put the customer first, McQuivey said.

Meanwhile, adding a chief digital officer (CDO) into the mix – intended to be a bridge between the CIO and CMO – could introduce unnecessary complexity to executive teams, McQuivey claimed.

“There’s a good theory that suggests every time you add a person, you are adding all the possible interactions between that person and all the other people,” he said. “And as a result, you’ve added 20 per cent more people to the c-suite but 200 per cent more complexity.”

McQuivey agreed there are reasons for why an organisation may want to appoint a CDO, including as a way to signal to the business that it is taking digital strategy seriously.

McQuivey said an interesting force is coalescing and it’s the concept of digital relationships.

“When you move one layer up you realise that software enables a new kind of relationship with the customer and that software, is what creates the future platform over which you will relate to your customers.”

McQuivey highlighted Amazon and Apple as examples of companies that understand this. Amazon has sold 90 million Kindles and Apple around 260 million iPads globally, he said.

“If iPad nation were a country, it would be closing on Indonesia at the world’s fourth-largest country sometime in the next quarter. It will be by this time next year the third largest country in the world having surpassed the US,” he said.

The more complicated the industry, the more necessary it is to create digital relationships, McQuivey continued.

“Uber isn’t necessarily having the best brand experience here in Australia but it’s a company that is doing a great job at building two kinds of relationships – one with the driver and one with the rider – and connecting those two in a seamless manner,” he said.

And it’s the data that’s driving that level of interaction and value. McQuivey pointed out some users would have boycotted thumbprint identification 10 years ago as a protest against technology vendors collecting that level of personal information just to use a piece of technology.

“Now, we are grateful for it because the digital relationship that this enables is valuable to us. It’s giving us this digitally-disruptive life that we enjoy so much,” he said.