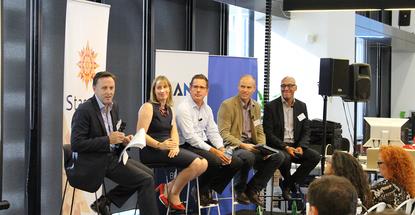 CMOs need to find a balance between the ever-wider range of specialist and broad business-based skillsets within the marketing function if they’re to deliver media effectiveness and growth for their organisation.

Speaking on the rise of evidence-based marketing on a Sydney panel to launch the latest Starcom MediaVest Group Media Future Report, Kellogg’s marketing director, John Broome, said he saw the breadth of roles in the marketing team expanding.

On the one hand, CMOs are requiring increased specialism within the marketing function thanks to growing demands for data-driven marketing excellence and digital disruption, he said.

“As opposed to having a team of brand managers, we are going to have those data specialists sitting in-house, and media strategists potentially in-house as well,” he said.

“Complementing this increasing specialism is a counterbalance of traditional brand managers becoming broader business managers with a commercial, holistic business focus. We’ll need to balance those two skillsets – the narrow versus the board – to ensure they complement each other.”

“In addition, often the types of skills or experiences you’re dealing with at a higher level are those you’ve never had at a junior level. When I was winning my brand manager spurs, there was no such thing as ‘data’, but I have guys in my office now who can wax lyrical about it.

“Keeping up to speed with what’s going on, and being able to make effective decisions quickly, is vital. Those attributes around agility and resilience are going to be key.”

When asked by SMG about their key pressures in 2015, advertisers in the report said delivering results and effectiveness was the top concern (94 per cent), followed by meeting company objectives (91 per cent) and budgets (84 per cent).

In fourth position was agility and meeting real-time demands (79 per cent). This year was the first time SMG has asked about agility as a potential pressure in its survey.

In response, Broome said resilience is particularly important when marketers are dealing with their executive peers.

“It’s much more objective today; it has to be as the risks are much higher, and in a low-growth environment you can’t afford that. It’s very hard to hide mistakes.

“If you are going to fail, fail fast.”

Broome’s fellow panellist and Optus head of advertising, channel marketing, social media and sponsorship, Karen Phipson, said understanding the ROI from marketing is a vital skill today. For its part, Optus is increasingly changing the way its teams and agency partnership operate in order to be more dynamic and responsive to customers and media.

“As a marketer, creative is important and the creative idea is always fundamental and the audience. But you’ve got to pull that back to what you’re delivering and what impact you’re having for shareholders and on the business,” she claimed.

Broome agreed winning credibility around the marketing function goes back to the numbers.

“At the end of the day, we’re essentially responsible for driving growth of the business, so credibility around making investment choices and which are the right bets to put your limited resources on are critical conversations to have, particularly with the CFO,” he said.

“A general manager wants to see the strong relationship and trust between those two guys to help make a decision himself.”

Facebook A/NZ managing director, William Easton, who also participated in the panel, saw marketing an integral part of every function within a business thanks to digital disruption and the fragmented customer media landscape.

“Historically, CMOs haven’t been part of the revenue discussion but increasingly they are and that’s based on the fact that marketing is a core function of success in today’s environment with fragmented audiences,” he said.

Easton predicted an increasing number of organisations will start to appoint marketers to the CEO role and pointed to Mercedez Benz as one brand that has done just that.

“We will definitely start to see more CEOs of large organisations coming through the marketing function,” he said.

This year’s SMG Media Futures 2015 Forecast was based on surveys of 500 Australian advertisers and major media sales directors.

The report found advertisers estimate an overall increase of 2.7 per cent growth in advertising spend this year, while media executives predict 1.3 per cent.

SMG tempered this by pointing out last year’s 2.6 per cent estimates were revised down to -2 per cent by advertisers in mid-2014, with actual spend data showing a flat position for 2014 versus 2013. This switch from positive to negative growth was attributed to the negative impact on consumer sentiment of the mid-year federal Government budget.

Free-to-air TV was still the media used most in 2014, followed by newspapers, but the report showed significantly more investment in social media, online video, mobile and online channels last year compared to 2013.

SMG also found owned and earned media continues to secure a large percentage budget, with spend expected to be 3.5 times that of total paid media this year. CRM and branded video content are top areas of focus this year in this area. In total, earned and owned media is expected to represent just under half of time and effort in 2015, compared with 54 per cent in paid media.

In addition, SMS campaigns were nominated by 41 per cent of advertisers as a below-the-line media they intend to use this year.

ROI is a major area of focus for marketers, with sales modelling and social media monitoring among the preferred approaches for ROI analysis.

The rise of data and DMPs was also apparent in the SMG report. Seventy per cent of respondents said they would use data partners and DMPS to optimise online campaigns this year, up from 56 per cent in 2014.

When asked about the role of agencies in delivering these services during the Sydney panel, Starcom MediaVest Group Australia chairman and director of global experience product, John Sintras, pointed out building these capabilities in-house could cost upwards of $3 million, making agencies a key partner for brands.

However, there is no one-size-fits-all solution, he said.

“Clients have really different needs, different resources in terms of technology and access to data, they have different budgets. It’s really difficult to say this is the way you handle precision and data, and the tech stack you need and the sort of people you need and provide a one size fits all,” he commented.

“What we’ve learnt is you need to understand what the client’s ambition is, what they have access to in terms of resource, and then put that all together the right solution for that particular client.

“You need the right agency partner that can put together a sensitive solution, work in partnership with the client, and being totally transparent about what’s tech, what’s people, where are the mark-ups, and so on. Everyone needs to understand what the value equation is and what people are being paid for.”