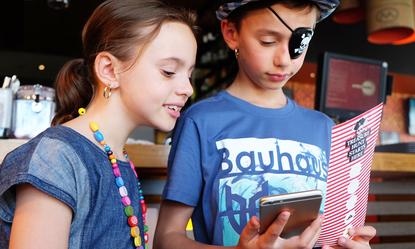 Bendigo Marketplace shopping centre is planning to expand its use of beacon technology after a successful family-oriented marketing campaign last month triggered new levels of customer engagement and foot traffic.

The HelloLocal app is a white-label app which rebrands itself based on where it is being used and can be used for retail offers, communications and more.

“One of the key findings for us from the trial was that an offer in itself wasn’t enough to encourage consumers to download the app, and that further incentives were needed to drive take-up,” Downs said. This was potentially compounded by a less technology savvy regional community, she said.

As a result, Bendigo Marketplace and Proximity worked together to come up with a more interactive way to employ beacon technology and the app in order to drive better engagement onsite.

The resulting idea was a digitally led, ‘free smartphone treasure hunt’, which took place during the January school holidays. The seven-day activity saw beacons and the HelloLocal app used to provide participating families with localised clues and information around finding the treasure.

“We have traditionally had a craft zone in the school holidays, and we’ve also brought in special zones such as an artificial ice-skating rink, Lego world and so on,” Downs said. “We wanted to use the beacons as a way of taking this to the next level.

“A treasure hunt worked well , and it also presented local people with something they could do together with their child.”

Bendigo Marketplace set up five beacons across the shopping centre, each triggering a clue leading to the next clue’s location and eventually, the treasure. Participants were first given a treasure map and initial clue, plus a sticker sheet and eye patch, at a temporary customer experience desk when they arrived. At that point, staff also ensured all participants had enabled Bluetooth and push notifications on their smartphone.

From there, families were sent off in search of the remaining clues. These were represented by an image of a parrot or treasure chest, and supported by a hidden beacon device. Once a participant came within 5 metres of the beacon, messages were triggered and sent directly to their smartphone relating to the activity. Those who completed the challenge and submitted a completed map were eligible to win prize packs.

To ensure participants downloaded the app in advance, Bendigo engaged in pre-activity advertising and social media posts. The app was, however, of a small enough size for families to download on the spot.

“We learnt through the offers trial we did beforehand that customers don’t want to take the time to download an app while they are shopping,” she said. “We knew that [downloading the app in advance] was key to the treasure hunt’s success and prior communication was important.”

Downs said the treasure hunt proved a great success, generating a 3.5 per cent increase in traffic at the centre, lots of social media buzz, and a PR value of more than $5000. Bendigo Marketplace recorded average session times of 14.47 minutes, and saw a 10 per cent increase in its customer email database.

Having been disappointed with the offers trial, and fully aware that beacon technology is still new, Downs said her expectations in terms of participation had actually been low.

“It was a very small investment – just 0.5 per cent of total marketing budget – to run the activity and I wasn’t sure quite what to expect, especially given the lack of success with the retail offers,” she said.

“I’d hoped for 50, and we got 200 through the activity, so it was a positive result for us.” The activity also attracted a mix of families including many who hadn’t traditionally participated in activities on-site before.

“School teachers also saw this as an educational experience for children to use these technologies in a fun way,” Downs added.

Thanks to the strong results from the treasure hunt, Downs is now looking at further applications of beacon technology and the app, and said the next cab off the rank is a digital Easter egg hunt.

“It’s about increasing downloads of the app again,” she said. “We will also spend more next time, as we know now that the success is there for us.”

Using the app for further onsite services is another opportunity, and Downs flagged way-finding billboards as just one potential use case.

“It’s an extra point of communications for us,” she said. “We could look to have beacons at the entrance points to help welcome people to the centre. We don’t have a permanent customer service desk so we could also use this as a communications point for centre management.”

Downs added retailers have been extremely positive about the new technology trials, with some suggesting the treasure hunt had helped raise visibility of their store or cafe.

“There’s still a use case too for retail offers, but only if they’re extremely strong.”