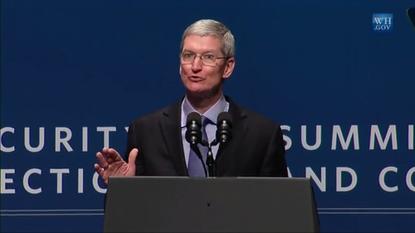 Apple CEO Tim Cook has warned of "dire consequences" if tech companies can't protect the privacy of those who use their products.

Giving up our privacy to digital technologies exposes us to greater risks than just identity theft and financial losses -- serious though those things are, Cook said in a brief speech at a cybersecurity summit in Silicon Valley on Friday.

"History has shown us that sacrificing our right to privacy can have dire consequences," Cook said.

He may have been alluding to oppressive regimes that punish citizens for political beliefs or their sexual orientation. But speaking to an audience that includes U.S. policy makers, Cook's remarks are also a reminder of the government's need to protect privacy as it conducts its digital surveillance campaigns.

"If those of us in positions of responsibility fail to do everything in our power to protect the right of privacy, we risk something far more valuable than money. We risk our way of life," he said.

Cook spoke at a summit convened by the White House, where President Barack Obama was expected to sign an executive order later Friday making it easier for the government to share sensitive information about cyberthreats with the private sector.

Google, Microsoft and other big tech companies sent representatives to the summit, but Apple was the only one that sent its CEO, possibly reflecting divisions between Silicon Valley and the U.S. government over its surveillance programs.

Cook spoke for only 12 minutes but crammed a lot in. He took a jab at companies like Google and Facebook whose business models are based largely on personal data they collect about their users.

"We have a business model that focuses on selling the best products and services in the world, not on selling your personal data," Cook said.

Apple's products are built with security in mind from their inception, he said.

Still, Apple has been far from perfect in protecting privacy. Its iCloud service was hacked last year and nude photographs of dozens of celebrities were stolen and posted on the Internet. Apple had to strengthen its security afterwards to try to prevent a repeat.

Cook also plugged Apple Pay, which he presented as a more secure alternative to debit cards. Starting in September, he said, people will be able to use the mobile payment service for certain federal government transactions, like gaining access to national parks.

"We can imagine a day in the not distant future when the wallet becomes a remnant of the past," Cook said.

Until then, the threat of identity theft and financial crimes remains very real. "The personal impact of these security breaches can be devastating," Cook said.