How digital is impacting fan engagement in sport

Cricket Australia, Australian Rugby Union provide an insider's view on digital's impact on fan engagement in sports and their data and technology plans 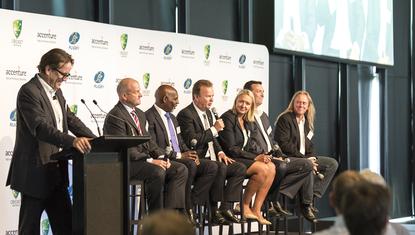 Digital channels are driving unprecedented levels of fan engagement for Australia’s leading sporting codes, but more needs to be done to bring digital into the physical experience on the ground.

That was the viewed shared by marketing leaders at Commonwealth Bank and Cricket Australia during a panel session on digital’s impact on sport, held as part of a trans-tasman Business Circle event in Sydney.

While a lot of emphasis has been placed on digital trends occurring outside the grounds, such as second screening, Commonwealth Bank general manager of brand, sponsorship and marketing services, Stuart Tucker, said the area not getting enough attention is what’s happening inside the stadium.

Commonwealth Bank is a major sponsor of Cricket Australia and provides financial support for local cricket in the community through its CommBank Cricket Club program.

“We forget about the digital experience of the customer in the stadium. What we’d like [to see] is unification across all the property owners to provide Wi-Fi during the onsite experience, to allow mobile payments at point-of-sale, to be able to order a beer or pie in your seat and have it delivered, and so on,” he said.

“We talk about the digital experience at home but we can’t forget about the fans in the ground. That’s the next frontier for us – to find a way for that all to align.”

According to figures recorded by AT&T at this year’s US SuperBowl, mobile data usage in the stadium reached 624GB during the game, the equivalent of 1.8 million social posts with photos.

Encouragingly, there are investments being made in improving the experience onsite, said Cricket Australia executive general manager of media, communications and marketing, Ben Amarfio. Examples include improvements at the Sydney Cricket Ground and Melbourne Cricket Ground, with $45 million being spent on upgrade work that will include new screens, Wi-Fi and LEDs. There was also $580m spent on renovating Adelaide Oval.

“The important point is that we need to build the at-match experience so it is as good as the TV experience,” Amarfio said. “That’s what everyone is worrying about."

The TV experience is so good now, it has the potential to start diluting crowds, he said, noting that although this hasn't yet happened in Australia, it has been seen with some sports in the US.

"What we need to look at is what we’re doing at a venue level to ensure that experience is better, or as good, as TV.”

Amarfio also called on sporting codes to take a bigger leap in investing into stadium infrastructure to make this happen.

“That’s what we probably need to move to in order to see… more of this digital investment.”

Off the field, Cricket Australia has been making great strides in building its digital properties after striking a partnership with the Nine Entertainment Company 18 months ago. These have triggered significant audience growth and complemented, rather than diluted, TV audiences, Armarfio said.

Amarfio said Cricket Australia’s two-pronged business strategy was to put the fans first, and be number one with its teams globally.

“What you often find is success goes hand-in-hand with traffic,” he commented.

As a result of the digital investment, the cricket.com.au website was the number one sports network in Australia in December, with 1.08 million unique users.

“There has been this fear of a dilution of audiences from digital but we’ve not seen that,” Armarfio added. “What we are seeing is that if content is good enough and engaging, the fans will watch it.

“People are consuming more and across more platforms. What we want is to be where fans are – we have to go where they live and breathe.”

Knowing consumers better in order to deliver more relevant content digitally is a common theme across most brands globally, and sporting codes are no different.

When asked for his digital and technology wishlist, Australian Rugby Union CEO, Bill Pulver, said it was to have a comprehensive database of the 600,000 Australians engaged in the game in order to understand all their interactions with the sport. This could then help the ARU to forecast what they want in the future and deliver a relevant solution.

He explained the ARU is working with Accenture on building digital platforms, as well as Salesforce to put in place a new CRM tool, in order to improve fan engagement.

“We have a couple of million people we know of, although we recognise there’s work to be done on duplication and so on,” he said. “What we do know is there are 7 million cricket fans in Australia, and 5 million of those are dark to us.

“We have to deal with that 2 million first. We’d love to get to the position where these are so segmented we could have 20,000 or 30,000 segments and talk to those people in the way they want to be spoken to.”

“Relevance is key and we’re conscious of how we speak to someone who is only getting Woolworths points versus someone visiting our chairman’s lounge,” she said.

For example, Qantas sends 50,000 or more versions of communications to members, and has also recently put more customer data directly into the hands of stewards and customer-facing staff, she said.