Short film maker and head of Fun Little Movies, Frank Chindamo, shares his tips on making videos for brands and why being fun is better than being funny 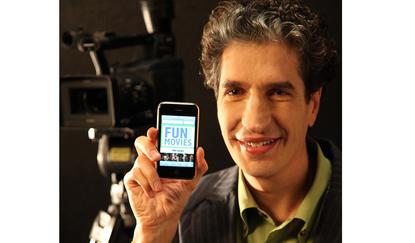 With more than 100 hours of video uploaded to YouTube every minute, ensuring that even a short film can capture an audience’s attention is no easy task. But when you’ve been making short films for more than 25 years, there are a few tricks you pick up along the way.

Frank Chindamo got his start in short filmmaking back in 1988 after completing his Masters of Fine Arts at New York’s Columbia University. Now based in Burbank, Fun Little Movies has created content for brands including Intel, Toyota, Chevrolet and Doritos.

His first work was creating short fillers for US cable channels such as HBO, Showtime and Comedy Central.

“Those little short films were a great way to cut you’re your teeth,” Chindamo told CMO. “Sixty per cent of the lessons that you would learn on a feature film you would learn making a short film for a cable network.”

In 2001, he made his first online short movie for an online dating company – four years before YouTube was founded. His production company, Fun Little Movies, is credited as the first US company to produce comedic films for mobile phones globally.

Speaking ahead of a series of Pathbreaker Masterclasses being held in Australia by X Media Lab, Chindamo said online video is a strong medium when trying to engage with ‘generation c’ – which he defines not so much by age group, but by their willingness to consume, comment on and forward online content.

“Asking someone to make a viral video for you is like asking somebody to go out and buy you a winning lottery ticket,” Chindamo said. “It is a little impossible to predict, but there are ways to improve your odds.

“The audience is growing and the amount of time they spend interacting with YouTube is growing. At the same time, people who already have an audience, or have an understanding of the medium, are still able to cut through.”

Some of those methods are readily adopted, such as ensuring the thumbnail still includes a close-up featuring open eyes and bright contrasting colours. Having a click-bait header is also helpful. Harder to crack though, is the content itself.

“Oftentimes a good story will do the trick, but you also want something that is surprising,” Chindamo said. “As human beings, we love to be surprised; we love to be told something we didn’t know.

“If you can do something that has a good enough narrative, a good enough visual punch or eye-candy, and hopefully be either funny enough or ‘wow’ enough, then all of a sudden you’ve got other people spreading your message for you. And that becomes impressions that you don’t have to pay for - you’ve got other people doing the heavy lifting for you.”

While many of his company’s works have been comedic, Chindamo said being funny is not as important as being ‘fun’.

“Humour helps – it almost can never hurt, unless you are at a military funereal. But it can almost always help,” he claimed.

When it works, it works in spades. A series of videos created for the Kingston electronics brand received more than 200,000 hits, while a series produced for electronics retailer, RadioShack’s OmniBox TV streaming service pushed sales three time above expectations over the 2012 Christmas period.

Another project for Chevrolet’s Volt electric car saw Chindamo recruit student filmmakers from some of LA’s top film schools, who were given a day to create short films that were ultimately judged by Avatar and Titanic producer Jon Landau.

“The brand was delighted with them, Jon was happy to be part of the process, the students won money and prizes, and the spots themselves are still on our reel,” Chindamo said.