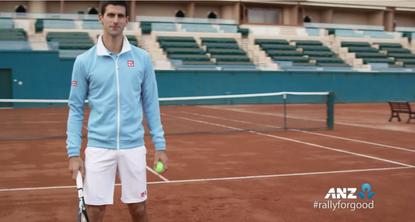 ANZ has partnered with its new ambassador and world number one tennis player, Novak Djokovic, on a tennis-themed social media campaign aimed at raising money for charity.

The Australian bank claimed the #rallyforgood campaign is the world’s first tennis rally on social media. Consumers are encouraged to share a photo or video of themselves hitting a tennis ball using the designated hashtag, and then share it with a friend to continue the rally.

ANZ will donate $2 for every ‘shot’ shared by consumers on their public social media profile up to $100,000. The money will be donated to several local community programs across Asia-Pacific including Tennis Australia’s ‘Tennis Cares’ program.

The activity kicked off on Twitter on 12 January with a YouTube video of Djokovic, along with tweets from ANZ CEO for Australia, Philip Chronican, and group managing director of marketing and innovation along with CEO of Global Wealth, Joyce Phillips. It is being supported by TV, radio and digital media advertising and closes on 1 February.

Phillips said the program was about combining community support with driving awareness of tennis as a sport.

“We’re proud to be launching this new social media campaign which is about raising money for a good cause, but also encouraging people to get involved in sport of tennis through having a rally on social media,” she said.

The social media initiative has been launched in the midst of Australia’s summer tennis series of tournaments including the Brisbane International and Australian Open.