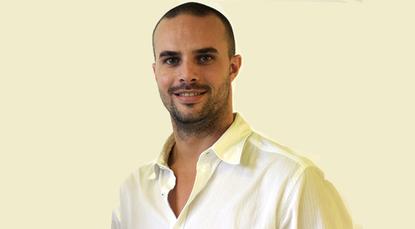 Marketers taking up the reins as their company’s first CMO must not only be flexible but also willing to learn, embrace data wholeheartedly and keep their eyes firmly on delivering results.

That’s the view of Mint Wireless CMO, Justus Hammer, who caught up with CMO recently to discuss his role as the B2B mobile payments provider’s first chief marketing officer, as well as the skills needed to be a successful modern marketer.

“The times of the brand marketing, fluffy stuff is over,” he claimed. “You need people who understand numbers and who understand how to report on certain channels and results.”

Hammer’s own background reflects the data and digital-first thinking modern CMOs need to be successful. Having studied microeconomics at university in Germany, he took a role in marketing at directories company, Goyellow, helping the organisation move its physical offering to the online space. He claims the experience taught him plenty of lessons in “what not to do” when building a brand digitally.

“The company tried to take an offline model onto online and use the same mechanisms. That was a big learning curve for me on the things that are wrong, and I try not to make the same mistakes twice,” he said.

From there, Hammer moved into ecommerce, joining price comparison site, GetPrice, as its first marketing manager and rising to director. He then became co-founder and the first CMO of online buying site, Spreets, which was sold to Yahoo7 for $40 million in 2012.

Funny thing is, Hammer didn’t set out to be a marketer.

“Ten years ago, if you’d ask me if I was going to become a CMO at some stage, I would have been shaking my head,” he said. “Going through university, I had always thought marketing was a brand-focused activity, rather than what it is now, which is a very targeted and results-driven numbers game.

“Marketing today is a lot more about creating a return on what you do and showing what channel has driven that return, over pushing out content through different channels and hoping something sticks.”

After leaving Spreets, Hammer looked for a new challenge in Australia and became interested in US-based payments provider, Square, and the need for payments solutions for smaller businesses. He started talking to Alex Teoh, the original CEO and now executive chairman of Mint Wireless, and joined the organisation as CMO six months later.

At the time, Mint was a five-year old, ASX-listed company undergoing a dramatic change in its product offering.

“It was just the time where the company had built the product but needed someone to help from a strategic marketing point of view to get it to market,” Hammer said.

“The business started off as a mobile payments company, but the focus in terms of what product to bring to market changed. In the beginning, it was all about enterprise payment functionality and providing solutions to the big end of town that they can use for their own salesforce and service people.

Hammer said there was no established list of priorities when he joined Mint Wireless. But it was clear Mint needed a comprehensive strategy to get its product out to market. A decision was made to abandon early plans for directly dealing with smaller merchants and microbusinesses, and establishing distribution partnerships.

To date, the company’s alliances have included MYOB, Bank of New Zealand, Beyond Bank and Australian payments startup, AusCabs.

Trying to bring new partners on-board is a very different proposition to marketing directly to a merchant or user, and Hammer said his job has been working with partners to ensure they have the right strategy in place for payments.

“Rather than doing some of the initiatives by going to market directly as Mint, we’re providing those as a service to our partners to make sure they are equipped with everything they need to get the right message out and bring the product to their customer base,” he said.

As an example, Hammer is endeavouring to help partners see payments services as part of a holistic customer engagement play.

“Payments used to be a dumb terminal… and like any other payment system, you had to reconcile it with any other system you have,” he explained. “What we’re looking at from a marketing perspective, and as an opportunity for smaller players, is to get into more sophisticated solutions for loyalty, direct marketing at point-of-sale, and integrating payments with other functionalities.

“We’re starting to build these [capabilities] to make sure they [end merchants] can use the data they get at the point-of-sale for other marketing activities they want to drive. It’s an ambitious project, but if you can get that right, it’s very beneficial as well.”

Since joining Mint 18 months ago, Hammer has already implemented various tactical and brand initiatives. The first was overhauling the website and communications to reflect the company’s more innovative product set and B2B focus.

PR was a second pillar in building brand awareness. “It’s a product that isn’t easy to understand, so getting the bigger brands to read something about Mint and being acknowledged in the industry as an innovator in the payments industry was very important for us,” Hammer said.

Investor relations became another focus given Mint’s ASX standing. “We knew we had the chance to do something great if we did it quickly, but we had to let people and investors know that we have a very innovative product and very few people could do what we could in Australia,” Hammer said.

In addition, it was important to align marketing with sales efforts. To do this, Mint has invested into its CRM system and ensured technology capabilities are in place across sales and marketing.

“We can track everything down from segmented campaigns we do in marketing, all the way to potential leads we get that we can hopefully close,” Hammer said.

Like most CMOs, Hammer is trying to utilise data more effectively to improve engagement with customers. He claimed this is easier in a smaller company, where he has flexibility around budgets and campaigns, and staff more easily collaborate and align behind the same goals.

“In small companies it’s less about setting a fixed budget at the beginning of the year and trying to hit your numbers and more about trying to find things that actually work and being flexible enough to change course if they don’t,” Hammer said.

“That’s always been my mantra in marketing. I’m a big fan of trying as many things as possible, but also changing course if it doesn’t work.”

The only thing you can’t do is try something without actually reporting it, Hammer said.

“Marketing 20 years ago used to be a cost centre, whereas now it’s a profit centre and in some companies, it may be the one profit centre they have,” he continued. “These days, if you talk budgets, you’re not just talking about getting $1 million for the year, you’re saying ‘give me $1m and I’ll give you $10m’.

“Becoming so results-driven has changed the way people look at the marketing function within the company. That drive to be performance-based and customer-centric has also put marketing into a more central role. You find now that product features are not driven by technology, but by demand from customers and customer research.

“All of those influencers have pulled marketing into a much more central role.”

Hammer said Mint’s long-term success depends on providing the right product features demanded and expected by customers. And that’s something marketing plays a big role in.

“We have done a lot of work talking to our potential customers and also end users. Out of that, we have created a strategy and the features we need to provide to our customers for us to be successful,” he said.

The company also faces significant market challenges as it establishes itself in the hotly contested payments space through further partnerships.

For Hammer, the biggest challenge in being a startup’s CMO is not having enough people to help complete the work. There are plans, however, to grow the team and Hammer is hoping to find people who have worked in a smaller company, as well as those with B2B trade marketing experience. Not surprisingly, data mining and reporting skills are also in demand.

Hammer’s advice to other marketers taking up a role as an organisation’s first CMO is to be “super flexible”.

“You also have to be willing to learn. When I came into Mint, there was a lot I had to learn about payments and how the market actually functions, as well as how that functions for a small company like us including the key levers we can pull based on what people are looking for,” he said. “Listening to people who have been working here for a while, plus potential customers, is extremely important.”

Given there are usually more things to do than you can handle, it’s also important for CMOs to create strategic frameworks and be ruthless about what needs to be done, Hammer said.

“You have to come down and prioritise the list of things you have to do to ensure you achieve your goals,” he said.

Our profiles of first-time CMOs