Why virtual reality is opening a new world for customer interaction

The rise of consumer-friendly headsets such as Oculus Rift, means virtual reality is finally set to go mainstream. And the opportunities for marketers are huge 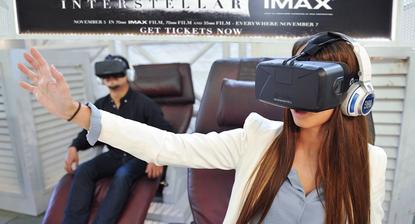 Virtual reality isn’t just for gamers. The emergence of inexpensive VR headsets such as Oculus Rift has created an opportunity for marketers to build an interactive 3D brand experience that truly engages the consumer’s senses.

“Virtual reality will be an explosive, guerrilla-style opportunity for anyone who is a marketing visionary,” claims Brian Shuster, co-founder of the online virtual world, Utherverse. The Internet marketing pioneer is credited with introducing banner and pop-under ads.

“Real-time, immersive interactivity has the potential to revolutionise many industries that were hardly touched by the flat Web such as real estate, convention and classroom education; and will also re-revolutionise industries such as shopping and entertainment.”

Because it’s new, virtual reality can help a brand stand out from the crowd and make a bigger impact on potential customers. IDC analyst, Sandra Ng, predicts more marketers will explore the technology in the year ahead.

“Creative agencies and marketers are trying to figure out how to do things differently and how to be more interesting and fun,” she says. “You have to wow the customer… That’s what a new technology like virtual reality will do.”

While there is hesitation among brands to put money into virtual reality campaigns, associate executive producer of creative agency Whybin/TBWA, Sean Gardner, believes this will change in the near future. Earlier this year, the agency delivered its first VR campaign for NRMA Insurance showing the effects of a car crash.

“It’s similar to when we were trying to sell mobile apps five years ago,” he comments.

It is unlikely the average household will adopt VR headsets until they are more affordable and a large amount of content is available. However, marketers and analysts see potential in bringing the technology to the non-gaming public through kiosks at public venues including shopping malls, festivals and expositions. They even suggest we could see dedicated virtual reality shops in the style of Internet cafés.

“You’re probably not going to get silver surfers buying these things, but that doesn’t mean they couldn’t be engaged by a marketing or advertising campaign,” says Ovum analyst, Paul Jackson.

Tourism Australia is eyeing virtual reality as a way to inspire tourists to visit Australia, as well as a possible tool to train travel agents around the world, according to the government agency’s CIO, David Rumsey.

Rumsey ordered a couple of Oculus Rift development kits in early 2014. The first step is learning from the Oculus development community, he says. “The thing that was of interest to us was really around this idea of experience,” he says.

For example, Oculus Rift could be used to virtually show tourists what it’s like to climb the Sydney Harbour Bridge. “That first time you put it on, and all of a sudden you’re in the context of that experience – it’s a pretty amazing feeling,” Rumsey says.

Tourism Australia will likely start by setting up VR stations at trade shows. The agency could also strategically select travel agents to experience virtual reality so that they can better sell Australia to potential visitors, Rumsey says.

Virtual reality also lends itself well to test-driving cars or showing an apartment, says Jackson. “Anything where you can deliver a remote, immersive experience of your product that you want people to buy will be interesting,” he says.

The team at REA Group is experimenting with virtual reality. “We have been looking at what could happen in the property market if you didn’t have to walk through it,” its CIO, Nigel Dalton, says. “We have done our first experiments scanning apartments and we are very excited.”

A recent marketing example using Oculus Rift was undertaken by Paramount Pictures in partnership with IMAX to launch its new film, Interstellar. The immersive experience gave US and Canadian consumers a virtual first look at the film’s Endurance spacecraft and the ability to travel through zero gravity at select cinemas with IMAX screens.

In the future, he expects virtual reality could be used to show consumers anything from real estate to a new refrigerator. He also sees partnership opportunities for brands that want to appear in the simulations. For example, the virtual refrigerator could be stocked with digital Coca-Cola bottles.

In this respect, virtual reality could hold a similar opportunity to in-game advertising, Dadwal says.

“Virtual spaces and games have ample opportunity to replace billboards and banners, and I envision new interactive kinds of ads, like virtual kiosks and terminals – perhaps staffed with live but virtual people – will proliferate as the numbers begin to justify the ad placements,” adds Shuster.

“Standard, real-world marketing techniques will also be available in VR environments. Techniques such as venue sponsorships will allow brands to get their name out as progressive technology supporters, and it will provide virtual venues with a ready income.”

Similarly, because the virtual reality Web is an Internet layer, venues will want to buy traffic, Shuster says. “Web-style clicks will merge with real-world ‘foot-traffic’ to create a virtual foot-traffic marketplace where companies can sell ‘street-front’ doors and portals to send users to a paying destination,” he claims.

A virtual world could itself be a store. Ng for one, envisions an interactive purchasing experience where the shopper grabs a product off a virtual shelf and puts it in a virtual bag.

Another component is user-generated content, and Dadwal says marketers will also need to target VR content developed by consumers. If marketers can get consumers to create experiences that include their brand, this endorsement could be more influential than an experience created by the brand itself.

“User-generated content could be the main driver of the usage of this device, and that’s something we need to be aware of,” he continues. “Brands should start to look at how they can become an integral part of content being generated, because the quantum of content coming from users will far exceed the content generated by media companies.”

Up next: The technology helping VR to take off

There are several consumer-grade virtual reality headsets in development including those by Sony, Samsung and Oculus VR (now owned by Facebook). In a sign of the growing applications of virtual reality, Oculus co-founder and CEO, Brendan Iribe, in September donated US$31 million to build a lab at the University of Maryland dedicated to VR, artificial intelligence and robotics innovation.

Jackson believes the latest wave of VR headsets represents the best chance this type of technology has had yet to take off.

“This generation of hardware with the betas and development kits now is much more affordable and gives a proper, true image in the viewfinders compared to previous iterations, which were pretty nauseating for long-term use,” he claims.

Today’s PCs and game consoles are powerful enough to run sophisticated VR experiences, and Oculus Rift’s strategy of distributing development kits to interested creators ensures there will be software, he adds.

Shuster agrees the hype could finally be real. “The Oculus Rift is an amazing VR headset that has successfully overcome the technological hurdles that prevented prior VR headsets from going mainstream,” he claims.

“The frame rates and field of view are good enough, and the motion sickness is minimal enough that this headset could be embraced by the general public.”

Other experts say Oculus Rift shows the greatest immediate potential for marketers. One reason is that the technology has been an open platform from the beginning and will likely be first out of the gate, says Jackson. Sony is expected to target gamers, while Samsung is likely to go after high-tech early adopters, notes the analyst.

“For marketers wanting to explore this space, Oculus is the shoo-in brand.”

While the Oculus Rift headset itself is inexpensive – the current Development Kit 2 is priced at US$350 – there are other costs for marketers to consider. A big one is the computer hardware needed to power the experience, says Peter Galmes, creative director of Whybin/TBWA.

“A MacBook Air is not going to be able to deal with it,” he explains. For its NRMA project, the creative agency used a top-spec PC gaming rig.

There is also a staffing cost to consider because a VR headset can be intimidating to first-time users, says Jackson. Until average consumers become more comfortable, brands will need to hire help to strap them in.

However, Gardner estimates doing an Oculus Rift demo costs about the same as building a campaign microsite. “It’s cheaper than most TV spots.”

At Tourism Australia, the cost of production is a key question. “Some of the places we go to produce content could be remote and expensive to get to,” Rumsey says.

Since the agency already produces films, money may be saved by having crews simultaneously take footage for the VR application. The group plans to start with a small development project, and if that’s successful look to apply the VR technology more broadly.

“If we take [virtual reality] into account in the beginning, it’s likely to be a better economy of scale all the way through,” Rumsey says.

As with any media, there are rules that must be followed when designing a VR experience.

“This is a technology that surrounds your whole peripheral vision and it follows you around,” says Blau. “You can’t shake it off. You can’t look away.”

Jackson warns a number of factors related to motion can cause people to fall over or flip out. Movements that are very fast or evocative of sea sickness should be avoided, he says, and it is disorienting to cut between different scenes, making continuous movement a must.

Ng advises marketers not to get carried away with the concept of a virtual experience and neglect the user interface and other technical details. This can be as basic as ensuring the VR equipment is appealing to wear, she says. “Look at how the entire experience is delivered.”

And, of course, the old rules of marketing still apply. For VR to work as advertising, there must be a clear purpose behind it, say the Whybin/TBWA team.

“It has to be very specific to the content and should not be integrated into something which doesn’t appeal to the brand image,” he adds.

Shuster says virtual billboards are most effective when promoting a brand’s virtual world presence. “If a movie were to be advertised in VR, it should have an interactive virtual world, not a simple trailer, for example,” he says.

“Once users have responded to the ad and arrived at the interactive venue, then the entire venue and event will be a promotion of the brand and product. At that time, it will be fine to have direct promotions and ads.”

There will be a mix of success and failure in the early days of Oculus Rift, predicts Blau. “The only way to figure this out is to put it out there and iterate,” he says. “There’s going to be a lot of trial and error.”

Test and development is indeed the plan for Tourism Australia. “We’ll keep playing and we’ll keep testing and looking for an opportunity where it provides real value,” Rumsey says.

This article originally appeared in CMO magazine, Issue 3, 2014. To subscribe to get your own magazine copy, please register through our online member system: cmo.com.au/subscribe.