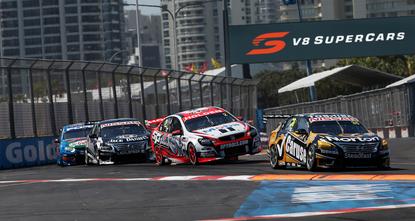 The V8 Supercars sporting event has launched a new brand identity aimed at widening the appeal of the championships as it looks to bring more brands and car manufacturers into the competition.

The branding work was undertaken by branding and design agency, Hulsbosch, and coincides with the sport’s 2017 Gen2 Strategy, which will see vehicles with new engine configurations and body shapes being eligible to participate in the sporting event for the first time. The 2017 blueprint, which was launched earlier this week, means current V8 Supercars could be joined by turbo-charged six- and four-cylinder cars from 2017, potentially bringing a younger base of fans into the sport.

According to the Hulsbosch team, the new brand identity reflects the V8 Supercars business growth strategy and is about not only cutting through as a populist brand, but expanding its appeal to future fans. It will be integrated into all corporate and marketing collateral, events, digital, sub brands and special programs such as V8 Supercars Dunlop Series, from 1 January.

“The time is right for a striking and dominant identity as we head to the next phase for the sport, on and off the track,” V8 Supercars CEO, James Warburton, said.

“V8 Supercars is dynamic, aggressive and intensely competitive. The sport needs an identity that represents these characteristics on a global stage.”

The branding was devised after consumer testing through research groups nationally, as well as an online survey and stakeholder interviews to better understand the sport’s wider focus and strategy.

Red was chosen as a way of highlighting the “fast and furious speed” of V8 races, he said.

“The ‘SC’ moniker is a simplified identification and will generate a genuine presence as a standalone icon for the sport, developed as an enduring brand to stand the test of time,” Hulsbosch said.