Users can listen to music, podcasts and other content directly in their timeline 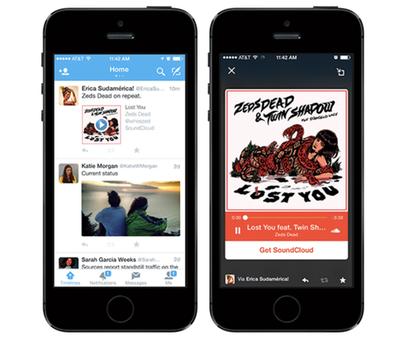 Twitter is adding "dockable" music players to its stream of messages, photos and videos with a new feature called Audio Cards.

Available on iOS and Android devices, Audio Cards can play music, podcasts or other audio content directly from the Twitter timeline when a song is clicked.

Users have been able to embed music before, but Audio Cards allow them to listen to the song while browsing.

"Throughout your listening experience, you can dock the Audio Card and keep listening as you continue to browse inside the Twitter app," product manager Richard Slatter wrote on the company's blog.

Twitter has partnered with streaming service SoundCloud to play content on Audio Cards. Slatter gave the example of DJ David Guetta tweeting a song, which appears as a large player containing promotional artwork, a timeline for the song, comments and links to other music.

Twitter also announced that content by select iTunes artists will also appear in Audio Cards, allowing users to preview music that has not been released yet. U.S. rock band Foo Fighters gave fans a taste from their new album "Sonic Highways" by tweeting their song "Something From Nothing."

The iTunes player in Twitter plays the whole song, unlike the preview on iTunes Store itself, which plays less than 2 minutes of it.

Twitter said it is still testing Audio Cards, and plans to open it up to more partners and creators. The feature follows other Twitter Cards that allow users to add more content to their tweets such as in-stream videos.