New ad-free social network Ello is pro-privacy, but with caveats

The site still gathers certain types of data about users 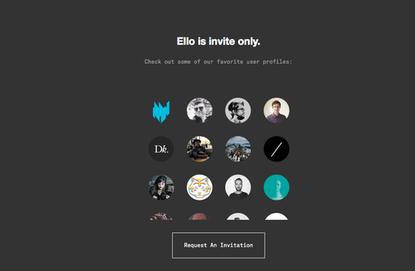 A new social network is generating buzz for its hard stance against paid advertising and data collection. But how the site really works, when it comes to privacy, is a little more nuanced.

Ello is open on an invite-only basis, so you'll need to know someone who's already in the club to get in straight away. Tens of thousands of people are on the waiting list, according to the site, and only small batches of people are being let in at a time.

The site, which is still in beta, works similarly to Twitter. Users' posts are public, and may include links to outside sites like YouTube or Soundcloud. There are two feeds: "Friends" for your besties; and a curated "Noise" stream for everything else. You can mention other users by adding the "@" symbol in front of their names, comment on their posts and repost them.

Those features are not remarkable. But Ello's been generating chatter partly due to its lack of ads and privacy ideals. Unlike Facebook or Google, the site says it will not sell any of its users' data to third parties. The site hopes to make money by letting users pay for premium features.

"We believe there is a better way. We believe in audacity," Ello says in its manifesto. "You are not a product," the company claims.

As many tech firms' businesses revolve around gathering personal data, Ello's claims are being viewed skeptically by some.

However, Ello itself does gather quite a bit of data. And while it may not "sell" it to third parties, there are still circumstances under which it will share it.

For starters, Ello also uses cookies to let its servers recognize your Web browser and provide information to Ello about how and when you use the site. That's standard fare these days, but Ello's privacy policy reveals it may also embed cookies in email to track whether the messages are being read.

If you delete your account on Ello, the site says it may still store backups of your data on its servers.

The site also uses an anonymized version of Google Analytics to gather and aggregate general information about user behavior and IP addresses.

"To the best of our knowledge, the information gathered by Google on Ello's behalf is collected in such a way that neither Ello, nor Google, can easily trace saved information back to any individual user," Ello says.

"To the best of our knowledge, this also makes what you do on Ello useless to Google for advertising purposes," Ello says.

And, Ello says it may share personal information with third parties if it's required to do so by law, or if one day it contracts with a third-party service to offer a new service like payments.

If you're an Ello user and all this makes you uneasy, you can opt out of Google Analytics through your settings page. Ello also respects the "Do Not Track" setting in most browsers, which is designed to send a signal to Web companies' servers to restrict the data they collect.

The fact that Ello honors DNT is commendable; many companies don't.

But Ello is not alone in the pursuit of privacy. Established ad-supported sites like Facebook and Google are now trying to bake in more privacy-oriented features. Facebook is working on anonymous log-ins for third-party apps, and Google recently abandoned its real-names policy for Google+.

And as for whether it will be able to survive financially without ads, "We're not interested in ruling the world," the company says on its website, in a jab at Facebook.

"We think people that are motivated to do things like that have unresolved psychological problems," Ello says.