The system may resemble Google's AdWords for keyword-targeted ads 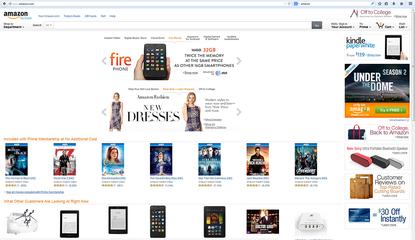 Amazon plans to expand its small online ad delivery business enough to take on Google's AdWords, according to a Wall Street Journal report.

The company is developing a platform for delivering ads both on its own properties and other sites, potentially creating a significant new source of revenue for the e-commerce giant, the report on Friday said. The move could also reduce the number of Google-delivered ads on Amazon's own site.

Given its scale and access to shopping information, Amazon might be able to challenge the dominance of Google's AdWords, which fuels that company's US$50 billion-a-year advertising business.

Many of the ads on Amazon's pages now are supplied by Google, though Amazon does place some product ads on its own site and has a small business supplying ads on other sites. With the new system, Amazon would expand its own program to handle more types of ads, said the report.

The system would resemble Google's AdWords, which places keyword-targeted ads alongside Google's search results and on millions of other websites, the Journal said. Its technology would let ad agencies buy ads in bulk, possibly for thousands of advertisers.

Beyond that, there weren't other details on how the reported system would work. Amazon did not immediately respond to comment on the report. A Google representative declined to comment.

Google is by far the dominant player in search, and Amazon would surely face challenges scaling its own system to compete. But the platform, should it eventually launch, could be a big success for Amazon, given all the information it has on people's online shopping habits.

And as Amazon expands its home delivery services, such as Amazon Fresh, the company could gain new valuable data for a more robust advertising program.